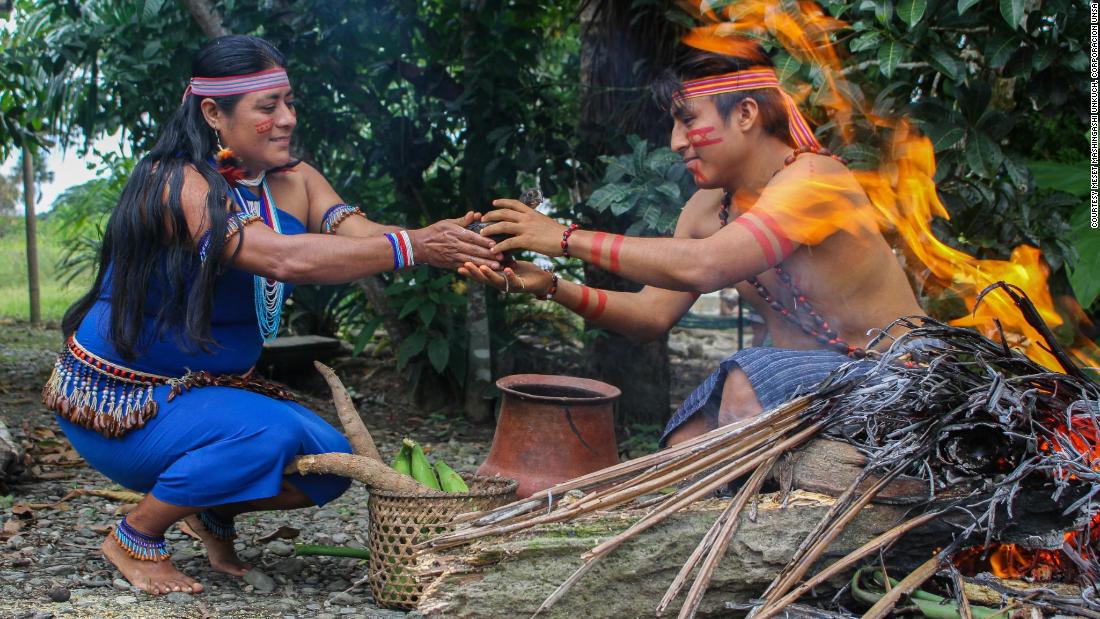 The finds are then distributed to his family, who are spread across 24 villages in a tropical region of Ecuador stretching from the mountains of the Andes to the lowlands of the Amazon. The Shuar tribe, to which he belongs, has lived there for centuries.

Growing up in the jungle alongside armadillos, monkeys and boa constrictors, 24-year-old Jimbijti (known as Shushui by his family) deeply respects nature and recognizes its fragility. The community knows it could make money by exploiting the land, says Jimbijti — such as by extracting and selling salt from the rare saltwater spring. But it chooses not to.

“We take enough but not too much,” he says. “It would be a lack of respect for everything and create a total imbalance.”

“It’s a lesson that is really important for the modern day, when we are faced with all the crises of climate breakdown, rising inequality, and biodiversity loss,” he says.

Giving back to nature

With 476 million indigenous people worldwide, living in territories ranging from the Arctic to the Sahara Desert, customs and traditions vary wildly. But central to the philosophy of many indigenous groups is the idea of giving back to Earth.

“Indigenous peoples have a harmony and interconnectedness with (nature) that is based on balance and collaboration,” says Roy.

In Roy’s Khasi community, located in the foothills of the Himalayas in northeast India, it’s customary to light a fire in the morning and boil water for tea before heading out to the fields. People then take the ash from the fire and spread it over the communal crops as “a compost or fertilizer for the land, showing their recognition,” says Roy.

When gathering honey from beehives high up in trees, Cameroon’s Baka people sprinkle seeds of fruit trees along the way to mark the path to the hive. This helps to regenerate the area and spread biodiversity, offsetting the disturbance to vegetation during the honey harvest, according to the FAO report.

This focus on nurture and regeneration contrasts modern agriculture, which typically aims to obtain the highest yields for maximum profit.

For instance, fallow land (leaving soil unplanted for a period of time) has long been a tradition of indigenous peoples. But in modern farming, it has historically been seen as wasteland. Roy explains how, in India, economic development has pushed indigenous fallow lands to be converted to produce a single crop, such as rice, year after year.

Only in recent decades, as the environmental impact of modern agriculture has come to light, have some governments recognized the ecological benefit of this practice. The EU now rewards farmers for leaving land fallow to improve biodiversity.

“On these fallow lands, there’s a lot of generation of wild edibles that are very nutrient rich, and are important for trees, bees, pollinators and birds,” says Roy. “We can’t just extract everything, there’s a need to replenish even as we use.”

The knowledge indigenous peoples have of wild fauna and flora could also be vital to a sustainable future. According to the FAO study, some indigenous food systems use more than 250 species for food and medicinal purposes. Many of these are considered “neglected” or “underutilized” by the UN, but could help to feed the growing world population.

But this wisdom and knowledge is at risk of disappearing completely. Indigenous peoples find themselves at the frontline of climate change, with many living in areas that are subject to rising temperatures or extreme weather events. Development, land grabbing, deforestation and the extraction of natural resources are also major threats, as well as targeted crime, with the NGO Global Witness reporting that 227 environmental defenders were killed in 2020, of whom more than a third were indigenous.

The influence of modern culture and growing access to markets is also having a damaging effect. Nowadays indigenous peoples depend more on the global market for produce, with the FAO noting that some groups source almost half of their food from it.

Jimbijti has seen this firsthand in the Shuar community. He says since mining companies entered the region, canned and processed foods have been introduced. His community now eats chicken, chocolate, butter and sardines, which it has never done before.

This isn’t just changing diets, but health and lifestyle too. “People have become lazy,” and put on weight, he says — adopting a more sedentary rather than nomadic lifestyle.

“Our culture is going through a very strong transition,” says Jimbijti. “We are losing our roots.”

To save these cultures, Roy urges nations to guarantee indigenous peoples “rights to land” and “rights to traditional knowledge and language.” If a local language starts to deteriorate, because it is not taught in local schools, community members forget the names of plants and herbs and ancient practices, he says.

While indigenous rights have improved over the last two decades, with the implementation of the UN declaration on the rights of indigenous peoples and other treaties, there is still a long way to go.

Roy believes the biggest lesson to be learned is the indigenous peoples’ value system: the worldview that “land and nature is not a commodity.”