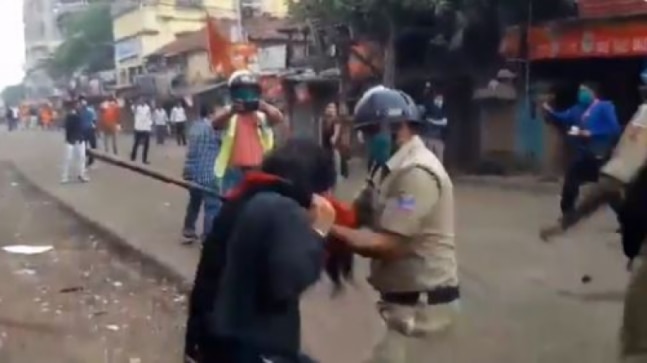 Former India cricketer Harbhajan Singh took to Twitter on Friday to express his anger against the Bengal police for manhandling a Sikh man, disrespecting his turban and pulling him by his hair.

He retweeted a video where a turbaned Sikh man is being beaten up by the police. In the video, one can see that as the cops beat him up, his turban opened but despite this the cops continued beating him up and then pulled him by his hair.

This reportedly happened during the BJP’s protest in Howrah on Thursday.

Plz have a look into this matter @MamataOfficial this isn’t done https://t.co/mKrbQhn1qy

Delhi BJP leader Impreet Singh Bakshi tweeted the video of the incident and demanded strict action against the cops involved in the act.

The Sikh man who was attacked has been identified as Balvinder Singh. He was part of the personal security team of BJP leader Priyangu Pandey.

“The act of tossing Balvinder Singh’s turban, pulling him by his hair and beating him up reflects the barbaric attitude of the Bengal police. Mamata Banerjee must take strict action the cops involved,” Bakshi tweeted.

However, the police have claimed that Balvinder Singh was carrying a weapon during the protest.

This is Balwinder Singh, whom Bengal police arrested after he was found carrying a gun at BJP’s #NobannoCholo rally yesterday

BJP state president @DilipGhoshBJP later claimed he is the personal body gaurd of BJP leader who is a close aide of BJP MP @ArjunsinghWB pic.twitter.com/gqk9bim74K

On Thursday, members of the BJP’s youth wing took out a protest march against the state government in Howrah and were on their way to the Secretariat to protest there. However, the police stopped them midway, following which the two sides clashed.

Police resorted to lathicharge and use of water cannons to disperse the protestors.

BJP leader from Barrackpore Priyangu Pandey was also in the protest and the cops caught hold of his security personnel, Balvinder Singh.

He was reportedly beaten up severely and during this, his turban opened. Despite this, the cops continued to beat him up and pulled him by his hair.

The video of this incident has gone viral on social media since Thursday evening, with the Sikh community demanding strict action against the cops.

Meanwhile, speaking about the matter, Balvinder Singh said, “I am not affiliated to any political party. I was not there to stage a protest. I am a retired soldier and part of Priyangu Pandey’s personal security team. I kept on urging the cops not to beat me up but they did not hear a word. They pulled me by my hair and dragged me all along and later arrested me.”