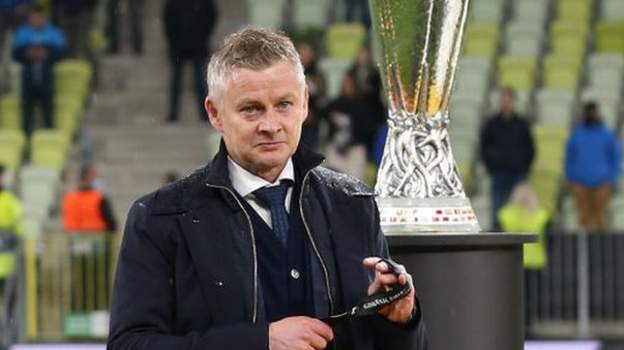 Manager Ole Gunnar Solskjaer accepts this season has not been a success for Manchester United but believes his squad has the right characters to do better next term.

The Red Devils finished second in the Premier League but have not won a trophy since 2017.

Asked if this season had been a success, Solskjaer said: “No.

Speaking to BT Sport, he added: “We need to get better, simple as.

“We’ve done really well this season coming through. The start was difficult. We had no pre-season and lost three of the first six.

“We pushed in the league, maybe got closer to the top than we thought and we got to a final. But you need to win the finals to make it a good season.”

But Solskjaer stood up for his team and believes they possess the right character to respond positively to Wednesday’s defeat in Gdansk.

“We have a strong, competitive squad. The spirit in the squad is good. They’re gutted in there,” he said.

“Now is not the time to point the finger at what I’d have done differently. But when you come out without the trophy you haven’t done everything right.

“We’re getting closer and closer and better. We were one kick away from a trophy and a good night.

“We have to have the desire to come back next year and improve. The only way to get the margins your side is to work harder and better.”

‘One winner, one loser – second means nothing’

United striker Marcus Rashford endured a difficult evening in Gdansk as he struggled to have an impact on the game.

But the England forward says he and his team-mates are determined to put things right.

“The team will not give up – no chance,” he said. “The manager won’t allow us to give up.

“We will come next season with bigger desire.”

Defeat against Villarreal means United have still not won a trophy under Solskjaer, who first returned to the Old Trafford club as caretaker manager in December 2018 before becoming permanent manager in March the following year.

It is now four years since United last won a trophy – when they did the League Cup and Europa League double in 2016-17.

But a defiant Rashford is confident the club will come back stronger next season.

He added: “People say a lot about Manchester United going downhill, blah, blah, blah, blah… but for me, the club, desire, hunger, talent, ability, the squad, we have everything to compete at the highest level.

“We just have to show it to the world and ourselves, show why we belong in the top places and why we need to win finals like this.

“I don’t want to hear ‘they were so close’ because it means nothing. One winner, one loser. Today we lost. We have to find out why and make sure next time we don’t lose.”