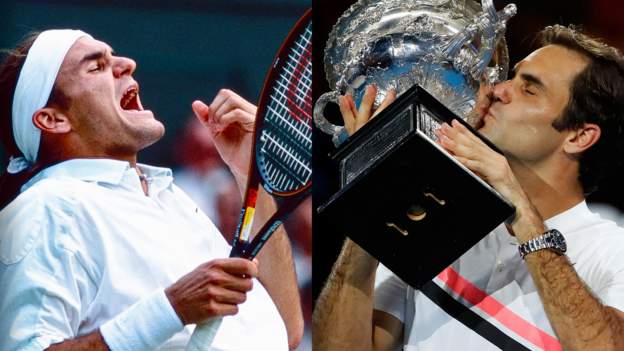 On Sunday, Roger Federer will call time on a career that has spanned 24 years and seen him become one of the greatest tennis players of all time.

Federer has won 20 Grand Slam singles titles and 103 ATP Tour titles, as well as attracting legions of fans around the world.

As he prepares to retire, BBC Sport look backs at 10 iconic moments in his career – and asks you to vote for your favourite.

Pete Sampras was the top dog at Wimbledon. In 2001 he was the four-time defending champion, world number one and heavy favourite for the title.

Then, in the fourth round, he came up against a pony-tailed 19-year-old who was starting to move up the rankings himself.

It would be the first of many stunning results on Centre Court for the Swiss great.

It was fitting that Federer won his first Grand Slam at Wimbledon, which he has often described as his favourite tournament.

Having failed to go beyond the quarter-finals in his previous outings at a major, Federer dropped just one set on his way to the final, where he beat Australia’s Mark Philippoussis 7-6 (7-5) 6-2 7-6 (7-3).

An emotional Federer dedicated his win to former coach Peter Carter, who died in a car accident the previous year.

“Peter was one of the most important people in my career,” he said. “I hope he saw it from somewhere.”

The victory was the start of a period of dominance, with the Swiss winning 11 of his majors between 2004 and 2007.

Federer may have lost but the final between him and Rafael Nadal in 2008 is widely regarded as one of the greatest matches of all time.

Federer was bidding for a sixth consecutive singles title but Nadal had thrashed him in the French Open final a few months previously and held an 11-6 winning record over the Swiss.

Played out over seven hours because of rain delays, Federer lost the first two sets, saved two championship points in the fourth and forced a fifth before Nadal claimed a stunning victory in near darkness.

It ended Federer’s unbeaten run of 65 matches on grass and was arguably the peak of an enthralling rivalry that lasted until Federer’s retirement.

Federer arrived at the Beijing Olympics just a month after his loss to Nadal at Wimbledon and on the verge of losing his world number one ranking to the Spaniard after 236 weeks at the top.

Having lost in the quarter-finals in the singles, he and Stan Wawrinka teamed up for the men’s doubles and claimed a big victory over the Bryan brothers of United States in the semi-finals.

It would be the only Olympic gold of Federer’s career.

By 2009, the only thing that eluded Federer was the French Open title. He had reached the final in Paris for the past three years but had lost each one to Nadal.

Federer had claimed just his second victory over Nadal on clay in the build-up to Roland Garros but Nadal was once again the heavy favourite to lift the trophy.

However, Nadal’s shock defeat by Robin Soderling in the fourth round put things in motion for Federer.

Federer seized his opportunity, ultimately beating Soderling 6-1 7-6 (7-1) 6-4 in the final to become the sixth man to win all four Grand Slam singles titles.

Federer avenged his heart-breaking loss to Nadal the previous year by winning Wimbledon in 2009 – but the final was just as draining.

It was Federer’s sixth Wimbledon title and his 15th major trophy, taking him beyond Sampras’ all-time record as the American watched on from the Royal Box.

The victory also sent Federer back to the top of the world rankings.

Federer arrived at his favourite tournament having not won a Grand Slam title since January 2010, and having gone out in the quarter-finals in his last two appearances at SW19.

He came through a five-set match in the third round before ousting defending champion and top seed Novak Djokovic in the semi-finals.

Waiting in the final was Andy Murray, bidding to become the first British man since 1936 to win a major singles trophy.

But Federer spoilt the home party with a 4-6 7-5 6-3 6-4 win, tying Sampras’ Open era record of seven Wimbledon men’s singles titles and regaining the world number one ranking in the process.

Murray would have his revenge a few weeks later on the same court as he beat Federer to win Olympic gold.

Federer had helped Switzerland reach their first Davis Cup final in 22 years but was struggling with a back injury, leading him to withdraw from the ATP World Tour final just a few weeks before the showpiece event in Lille.

Against France, Federer lost his first singles rubber to Gael Monfils, leaving the tie level at 1-1.

He and Wawrinka teamed up for the doubles and won and Federer was chosen to play Richard Gasquet, knowing that victory would secure the trophy for Switzerland.

Federer beat Gasquet in straight sets, sparking jubilant scenes and leading an emotional Federer to dedicate the trophy to “the boys”.

Federer arrived in Australia having spent six months out with a knee injury and with many saying he would not win a major title again.

It was not easy for Federer – he beat two top-10 players in Kei Nishikori and Tomas Berdych and ousted Wawrinka in five sets on his way to the final, where long-time rival Nadal awaited.

It was the first time Federer, now 35, had beaten Nadal at a major since the 2007 Wimbledon final.

Federer became just the second man after Jimmy Connors to win 100 ATP titles with his victory at the Dubai Tennis Championships in March 2019.

He beat Greece’s Stefanos Tsitsipas – who had ended his Australian Open title defence a few months earlier – 6-4 6-4 to lift the trophy.

The victory came 6,600 days after his first career title in Milan, which he lifted at the age of 19.

Federer would go on to win three more trophies, with his final title coming at the Swiss Indoors in 2019.

And now vote for your favourite

If you are viewing this page on the BBC News app please click here to vote.

‘The voices you’re not hearing’: the Labour women fighting for modern childcare