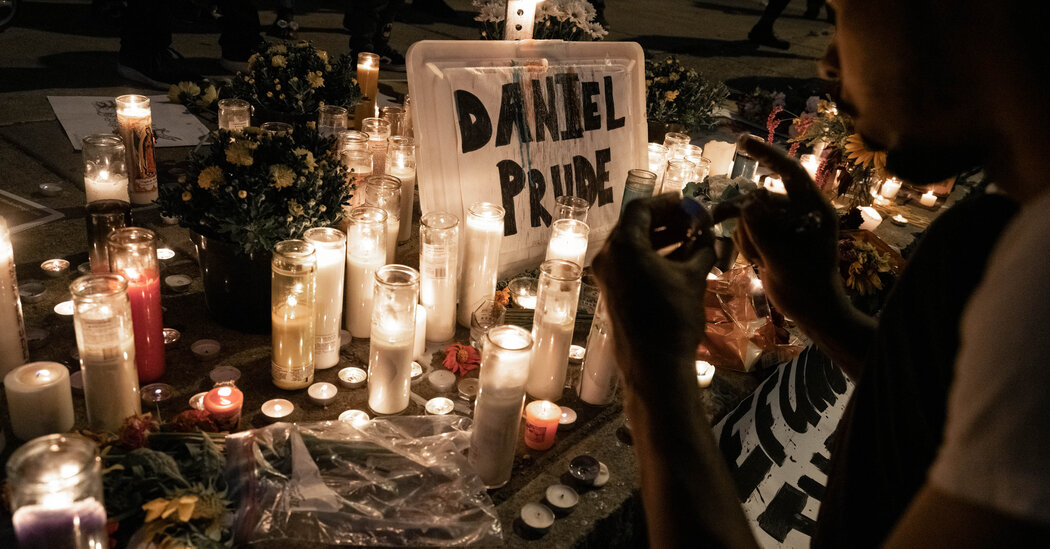 In the minutes after Daniel Prude’s heart briefly stopped during a struggle with officers who had pulled a hood over his head, an unofficial police narrative took hold: He had suffered a drug overdose.

That account hardened when the police chief in Rochester, N.Y., told the mayor that a man in custody was in the hospital after taking PCP, or angel dust.

Mr. Prude died a week later, on March 30, but the Rochester police department offered no public comment in response, continuing to treat his death as an overdose. An extended period of silence followed, beginning in Rochester and leading all the way to the state capital. It ended this week with deepening scrutiny of the long-overlooked case and accusations from Mr. Prude’s family that the city and state have engaged in a cover-up.

He was under the influence of PCP, and having a psychotic episode. Mr. Prude seemed lucid at times but at other points asked for money or a gun. He did not resist arrest and was unarmed.

The Rochester police chief this week denied that he and the department had misled the public. But an examination by The New York Times of the official response to Mr. Prude’s death shows that police and city officials in Rochester withheld information about their handling of the case.

When Mr. Prude died, the police issued no news release. No publicity followed a county autopsy in mid-April that determined that the manner of death was homicide, and found that Mr. Prude, 41, had suffered “complications of asphyxia,” with the PCP a contributing factor.

Despite a national debate over race and law enforcement, state officials made little effort to bring attention to Mr. Prude’s death. The state attorney general’s office did not disclose that it was investigating the case until this week, though it said it does not generally announce such inquiries until they are concluded.

Gov. Andrew M. Cuomo’s only public mention of the case before this week came on July 15, three months after a county medical examiner had ruled it a homicide, when the governor issued an order formally declaring that the attorney general had jurisdiction.

And even as the nation erupted in outrage over the death of George Floyd, a Black man who died in Minneapolis after a police officer held a knee to his neck, New Yorkers were kept in the dark about another death in police custody.

Days after Mr. Floyd’s death, state prosecutors asked a City of Rochester lawyer to withhold body camera footage from the public because releasing such evidence would interfere with the office’s investigation, the mayor’s office said on Thursday.

The attorney general’s office denied this, noting that the city and the Rochester police department were “free to move forward with their own investigation.” Rochester city officials, however, repeated their assertion on Friday.

A combination of factors may have ultimately caused Mr. Prude’s death, according to the medical examiner’s report. But the release by Mr. Prude’s family of officers’ body camera footage from that night — showing a naked Black man, handcuffed and hooded in the falling snow — radically complicated the police narrative.

His death added another name to the list of Black people, including Mr. Floyd and Breonna Taylor, who lost their lives after police encounters, leading to unrest in the nation’s streets and providing a potent issue in the 2020 presidential election.

Protesters have taken to the streets of Rochester every night since the video was made public on Wednesday. They have grown in intensity, with the police using pepper spray to disperse crowds on Thursday.

On Friday night, what began as a peaceful rally at Martin Luther King Jr. Memorial Park took a violent turn. Protesters marching past restaurants overturned tables and threw furniture and bottles as diners scattered. Police officers in riot gear responded to the chaotic scene with pepper spray and orders to disperse.

Later, as protesters paused at the intersection of East Avenue and Alexander Street at about 1:20 a.m. Saturday, two cars drove into the crowd, knocking at least two people to the ground. In videos shared on Twitter, the driver of at least one car can be seen spraying demonstrators with chemicals and racing away.

Events in the case began on March 22, when Mr. Prude, a father of five from Chicago, arrived at his brother’s home in Rochester. He had been kicked off an Amtrak train in Buffalo, about 75 miles to the west, and he appeared deeply troubled, seeming to hallucinate and trying to hurt himself by jumping down a flight of stairs, family members said.

His brother, Joe Prude, had him hospitalized that very day for evaluation, but the hospital released him hours later.

In the early hours of March 23, Mr. Prude ran from his brother’s home in just a tank top and long underwear on a freezing night. A short time later, officers responded to a 911 call of a naked man who was ranting in the streets and telling at least one passing stranger that he had the coronavirus.

Officers arrived and handcuffed Mr. Prude without incident as he sat in the street. Between prayers and profanities, and demands for money or a cigarette — or a gun — he spat on the street, ignoring officers’ commands to stop, the footage shows. An officer draped a mesh hood — known as a spit sock — over his head, and he became more agitated, attempting to rise to his feet.

Officers pinned him to the ground, and his pleas turned into muffled gurgles inside the hood, then stopped altogether.

An ambulance arrived, and a paramedic performed chest compressions. Mr. Prude was in cardiac distress — or “coded,” in medical jargon. One of the paramedics stood up and addressed the officers.

“So, PCP can cause what we call ‘excited delirium,’” she said, as recorded on an officer’s body camera. “I guarantee you that’s how he coded. It’s not you guys’ fault. You’ve got to keep yourselves safe.”

Later that day, the Rochester police chief, La’Ron Singletary, told Lovely Warren, the mayor, “that Mr. Prude had an apparent drug overdose while in custody,” Ms. Warren said in a statement this week. “Chief Singletary never informed Mayor Warren of the actions his officers took to forcibly restrain Mr. Prude,” the statement said.

The Rochester Police Department did not return repeated calls and emails for comment on Friday. Chief Singletary insisted on Wednesday that the police were not hiding anything.

“I know that there is a rhetoric that is out there that this is a cover-up,” the chief said. “This is not a cover-up.”

While Mr. Prude was in the hospital, his brother — forbidden to visit because of concerns over the coronavirus — could find out little about his condition.

He called a lawyer’s office, and on April 3, the family filed an open records request with the Rochester Police Department seeking footage from the body cameras and a request that any evidence in the encounter with Mr. Prude be preserved, according to the lawyer, Elliot Shields.

Letitia James, the state attorney general, learned of the case on April 16, after her office was informed by the county district attorney of the preliminary autopsy report that showed asphyxiation was a cause of death. Ms. James’s office took over the case by April 21 and began an investigation.

The Rochester police were already closing their own internal investigation, interviewing the officers involved and reviewing their body camera footage. It concluded on April 27: “Based upon the investigation, the officers’ actions and conduct displayed when dealing with Prude appear to be appropriate and consistent with their training.”

The case remained under wraps in May, even as the country erupted in protests. On June 4, a little more than a week after the death of Mr. Floyd, a top official in Ms. James’s office asked city officials not to release body camera footage so as not to “interfere with the attorney general’s ongoing investigation,” the Rochester mayor’s office said this week.

“There was never a request from the attorney general’s office to the City of Rochester corporation counsel to withhold information about the events surrounding the death of Daniel Prude, plain and simple,” a spokeswoman for the office said in a statement.

Mr. Shields, the Prude family’s lawyer, was still awaiting the videos he had requested from the Rochester police when he and family members, including Mr. Prude’s father, were invited to view those same videos in the attorney general’s office on July 31. The footage was horrifying, Mr. Shields said.

“It was honestly the most difficult thing I’ve ever done as an attorney,” he said. “I thought the father was going to die of an asthma attack. He had the inhaler out. He couldn’t breathe. It was horrible.”

On Aug. 4, the Rochester corporation counsel reviewed the camera footage before releasing it to Mr. Shields and the Prude family, and shared it with the mayor for the first time. It was the first time she learned officers had struggled with Mr. Prude, more than four months after that night, she said this week.

The release of the videos on Wednesday brought the first public comments from Mr. Cuomo and Ms. James.

The state’s only other acknowledgment of the investigation into Mr. Prude’s death came on July 15, when Mr. Cuomo’s order was posted on a state website, but not publicized.

The attorney general’s office has defended its actions and the pace of investigation, noting that such probes — authorized by a 2015 executive order by Governor Cuomo — sometimes take more than a year to complete and involve extensive interviews, examination of police and medical records and reviews of police protocol. As of Friday, the seven suspended officers still had not agreed to be questioned by Ms. James’s office, according to a person with knowledge of the investigation.

On Thursday, Mr. Cuomo asked for the case “to be concluded ‎as expeditiously as possible” and urged the Rochester Police Department to cooperate.

In a news conference on Thursday afternoon, Rochester’s mayor, Ms. Warren, said she was personally and professionally offended that her police chief had failed “to fully and accurately inform me of what occurred with Mr. Prude.”

But Ms. Warren, a lawyer, also blamed herself, saying that she had approached the case — and the investigation — in “the mind-set of an attorney, and not necessarily the mind-set of a human being.”

“Our response to him,” she concluded, “was wrong.”