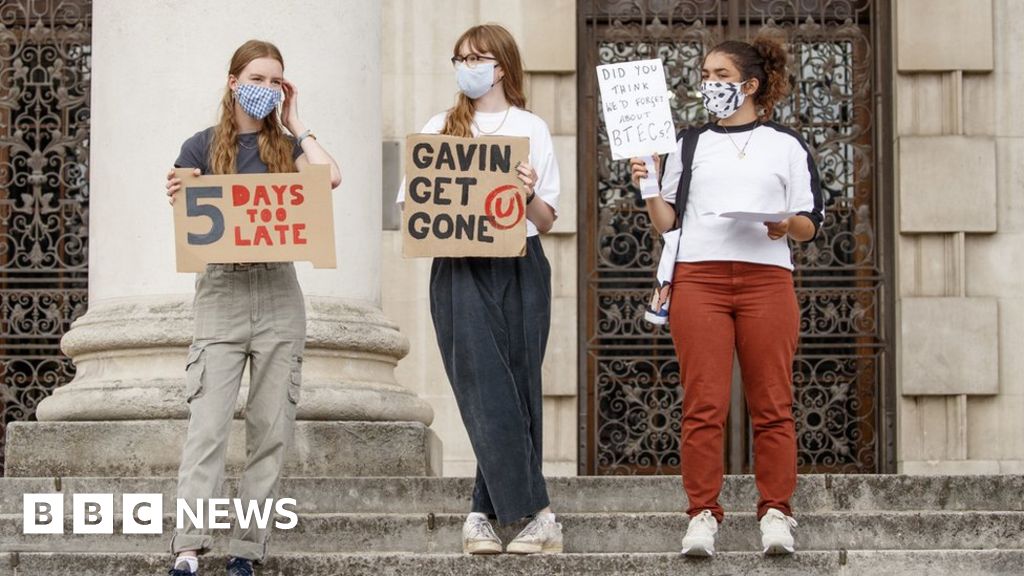 The education secretary has been urged to launch a review into the handling of A-level and GCSE results after exams were cancelled due to coronavirus.

A union for education leaders, such as head teachers, says it will write to Gavin Williamson over the “fiasco”.

Mr Williamson apologised to pupils after reversing how A-levels and GCSEs are graded following widespread uproar.

The Joint Council for Qualifications (JCQ) said pupils will get GCSE results on Thursday as planned.

The confirmation comes following confusion over how results day would run after the government U-turn.

Julie McCulloch, director of policy at the Association of School and College Leaders (ASCL), said the JCQ’s confirmation would be a “great relief” to all concerned.

The government decision to give A-level and GCSE students grades estimated by their teachers, rather than via an algorithm, means that tens of thousands of A-level students may now have the grades to trade up to their first-choice university offers.

It has prompted concerns about the number of available places, with top universities warning that students who now have higher grades could still be asked to defer if there is no space left on their chosen course.

And uncertainty continues for students as the admissions service, Ucas, and individual universities have yet to be given access to the upgraded results.

Alistair Jarvis, chief executive of Universities UK, which represents vice-chancellors said problems could arise around issues of “capacity, staffing, placements and facilities – particularly with the social distance measures in place”.

Universities minister Michelle Donelan said she wanted to ensure any students who had accepted a “different course” than planned, as a result of being downgraded last week, should be able to “change their mind and to reverse that decision”.

She said No 10 was working with universities to help “boost the capacity available” in order to “minimise the amount of students that will be looking to defer.”

There is still doubt as to whether the education system will do right by the Class of Covid.

Will their chosen universities be able to accommodate them? Or have they given their degree place away already? Will they have to come back next year and fight it out with students who have missed even more school?

And for the first time since this ageing education journalist can remember, exam boards are not holding their usual mind-boggling briefing on GCSE results.

So for some time at least, there will be no details of how the nation has done in their general school certificate examinations.

Roll on the start of term – although that’s uncertain, too.

Hundreds of thousands of children in the UK have had their education disrupted by the pandemic after schools, colleges and nurseries were ordered to shut in March – resulting in the cancellation of all assessments and exams.

The ASCL – which is writing the letter to Mr Williamson – said a review was urgently needed into “what went wrong” with the grading system.

“This degree of transparency is necessary at a time when public confidence has been badly shaken,” said ASCL general secretary Geoff Barton.

Mr Barton also called on No 10 and Ofqual to put in place a “robust contingency plan” for students sitting GCSEs and A-levels next summer in the event of further coronavirus-related disruption.

How Gavin Williamson survived the U-turn

One former Conservative minister said he fully expects Gavin Williamson to be moved in any autumn reshuffle – that he has been given a reprieve by Downing Street, not exoneration.

He has to sort out the messy challenge of getting newly upgraded students in to universities then the tricky task of getting pupils in England back to school next month.

The partial return prior to the summer wasn’t exactly smooth. So if Mr Williamson’s performance in those areas falls short, then his current job is not safe in the long term.

But there are other reasons why he hasn’t received a ministerial P45.

This is not an administration which does resignations. Boris Johnson is loyal to those who are loyal and useful to him.

The University and College Union (UCU) and National Union of Students (NUS) have also written to the education secretary, urging No 10 to help students who have missed out on their first-choice courses and calling for financial support for the higher education sector.

She added that “substantial financial support” was needed “so universities can protect all jobs, safely welcome students and continue to provide world class teaching and research”.

And Ms Grady criticised Mr Williamson’s decision to suspend a cap on student numbers for universities – effectively allowing institutions to accept unlimited numbers this year – because she said it meant “certain universities can hoover up students, hitting the finances of other institutions”.

Despite the cap being suspended, some universities have said numbers will have to remain limited, particularly on vocational courses such as medicine and dentistry.

Ucas was unable to say how many students had not been able to take up places due to their results being downgraded.

Frances Ramos, 18, from Towcester, Northamptonshire, said she was pleased to be given her predicted grades of ABB – up from the BCD she received last Thursday.

But she said the U-turn “does feel like it’s a bit too late” and added: “I kind of wish the government had done this on Thursday.” She is now waiting to hear if her first choice, the University of Liverpool, will accept her to study this year.

Zainab Ali, 18, from London, also thought the government should have acted sooner. “I think it’s a shame. After the damage is done, that’s when they will take action and I find it quite frustrating,” she said.

Earlier, Mr Williamson said he was “incredibly sorry for the distress” caused to pupils.

Mr Williamson said it had been the common view of the government, exams regulator Ofqual, and the devolved administrations in Wales and Northern Ireland – of different political parties – that the system in place was more robust and “significantly better” than that in Scotland, after an earlier U-turn in Scotland.

But after the release of A-level results on Thursday he said it had become “increasingly apparent that there were too many young people that quite simply hadn’t got the grade they truly deserved”.

Ofqual’s algorithm came under fire after data showed its downgrading of about 40% of A-level grades in England had affected state schools more than private institutions.

Ministers in England, Northern Ireland and Wales all decided on Monday – four days after A-level results were issued – to revert to teacher assessed grades rather than the algorithm.

The U-turn means teachers’ assessments will also be used for all GCSE results – except for any students for whom the algorithm gives a higher grade.

It is still unclear what the climbdown will mean for students taking vocational qualifications, including BTecs, with students telling BBC Radio 1’s Newsbeat: “We’ve been forgotten about.”

Mr Williamson said he hoped they would also be subject to teacher-assessed grades, adding that the government was working with awarding authorities to ensure this happened.

Pearson, which awards BTecs, said it was aware that some students had experienced a delay in receiving grades but did not say how many were impacted.

Have your grades been raised? Have you still missed out on a university place? Do you have questions about your situation? Get in touch via the form.

In some cases your question will be published, displaying your name, age and location as you provide it, unless you state otherwise. Your contact details will never be published. Please ensure you have read our terms & conditions and privacy policy.

Use this form to ask your question:

If you are reading this page and can’t see the form you will need to visit the mobile version of the BBC website to submit your question or send them via email to [email protected]. Please include your name, age and location with any question you send in.