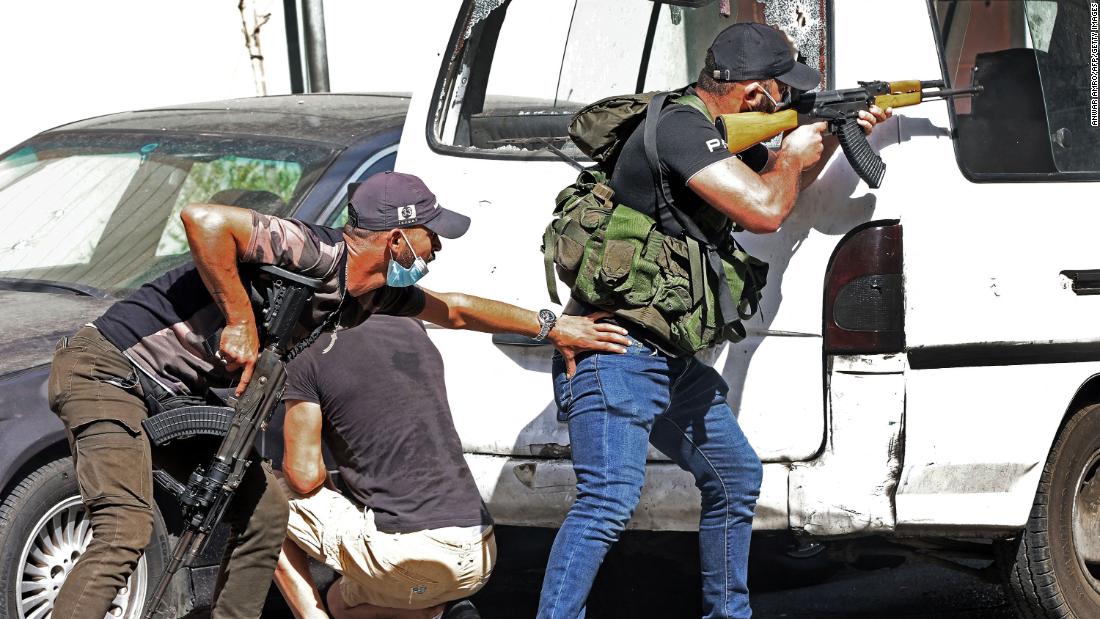 Hundreds of supporters of Iran-backed Hezbollah and its main Shia ally, Amal, were marching toward the Lebanese capital’s Palace of Justice when shots were fired at the protesters by snipers on rooftops, forcing demonstrators and journalists to take cover, according to the country’s interior minister, an army statement and local broadcasters.

The demonstrators were calling for the removal of a popular judge leading an investigation into the massive explosion at Beirut’s port last August, which killed more than 200 people and injured thousands more.

As armed clashes ramped up on Thursday, social media footage showed masked gunmen, apparently affiliated with the protesters, firing RPGs and AK-47s from alleyways and from behind garbage dumps and street barriers.

The Lebanese Red Cross reported that six people were killed and more than 30 people were injured in the violence. Interior Minister Bassam Mawlawi told reporters snipers and gunmen “shot people in the head,” while four B7 rockets were fired into the air.

Smoke was seen billowing from inside buildings that appeared to have been fired at. The epicenter of the clashes, the Tayouneh neighborhood, is close to the birthplace of Lebanon’s 1975-1990 civil war, and has raised the specter of further turmoil in the crisis-ridden country.

The gun and rocket fire appeared to pause around four hours after the battles began. Some traffic returned to the streets of the capital as Lebanon’s Civil Defense and Red Cross teams evacuated shellshocked residents from Tayouneh.

In a joint statement, Hezbollah and Amal accused right-wing Christian party The Lebanese Forces of being behind the sniper attacks. The Lebanese Forces party rejected those accusations and blamed the fighting on “widespread weapons” — an allusion to Hezbollah’s arms. The Christian party has been a decades-long staple of Lebanon’s sectarian elite, but has sought to re-position itself as an anti-establishment party, a move that has been rejected by Lebanon’s main opposition groups.

Thursday’s violence was met with wholesale condemnation. Lebanese activists tweeted about a feeling of “deja vu” from the country’s civil war, while President Michel Aoun and newly-minted Prime Minister Najib Mikati also said the fighting was reminiscent of that conflict. US Under Secretary of State Victoria Nuland, who visited Beirut on Thursday, called the scenes “unacceptable.” The European Union has also condemned the clashes.

“It’s clear that those who fired at the protesters were organized armed groups who have been planning this attack since yesterday,” one high-ranking Hezbollah official told CNN. “We will not fire back. They want to drag us into civil strife and we do not want to sow civil strife.”

Jumanah Zabaneh, a Beirut resident who walked to her daughters’ school near the clashes on Thursday, told CNN there was “panic all around.”

“The teachers tried their best to calm down the kids, trying to tell them not to panic and trying to help them make sense of what was happening, but nothing makes sense about this,” she said. “There was no way to keep them calm because men and women around them were panicking.”

“What is normally a 10 minute walk back home took 30 minutes because bullets were flying all around me and my kids. Every minute or two we would stop to hide in a building,” Zabaneh said.

She added that the chaos evoked memories both of the civil war and last year’s devastating blast.

“I’m not shocked with what happened,” she said. “Sadly, there is nothing new here. We are the generation of war. I was born in 1976, so that war was my childhood. This is the sadness of it. But it shouldn’t be my children’s childhood too.”

Violence amid a political scandal

Thursday started with protests against Tarek Bitar, the judge who is leading the Beirut blast investigation and has sought the prosecution of high-level officials

Hezbollah has been a staunch opponent of Bitar. This week, the judge issued an arrest warrant against lawmaker Ali Hassan Khalil, a top Amal official and former finance minister.

Since his appointment in February, Bitar, who also heads Beirut’s criminal court, has sought top political and security officials for questioning in the Beirut blast probe. He is the second judicial investigator to head the investigation. The first judge tasked with handling the probe was dismissed after two ex-ministers charged in the investigation successfully filed a motion for his removal.

Bitar’s ​investigation of high-profile politicians — including former ministers, the head of the country’s main intelligence apparatus and former Prime Minister Hassan Diab — has posed the biggest legal challenge to Lebanon’s ruling elite in decades. ​Diab has repeatedly denied the accusations against him.

​Many in the ruling elite, including politicians, have immunity in the investigation by virtue of Lebanon’s constitution, but there have been growing calls for that immunity to be lifted for the purposes of this probe. There are ongoing legal battles to maintain that immunity and avoid the prospect of prosecution.

Meanwhile, Bitar has emerged as one of the country’s most popular civil servants, hailed for championing rule of law in a confessional power sharing system that has repeatedly shielded powerful politicians and businessmen from accountability. Several legal petitions by officials being prosecuted to dismiss Bitar have been unsuccessful.

During a televised speech on Monday, Hezbollah chief Hassan Nasrallah chastised the judge, accusing him of being “politicized.” Nasrallah offered no evidence to support his claim.

For two years, Lebanon has been in the throes of an economic depression that has led to skyrocketing inflation, poverty rates and unemployment, as well as rapid decay in the country’s infrastructure.