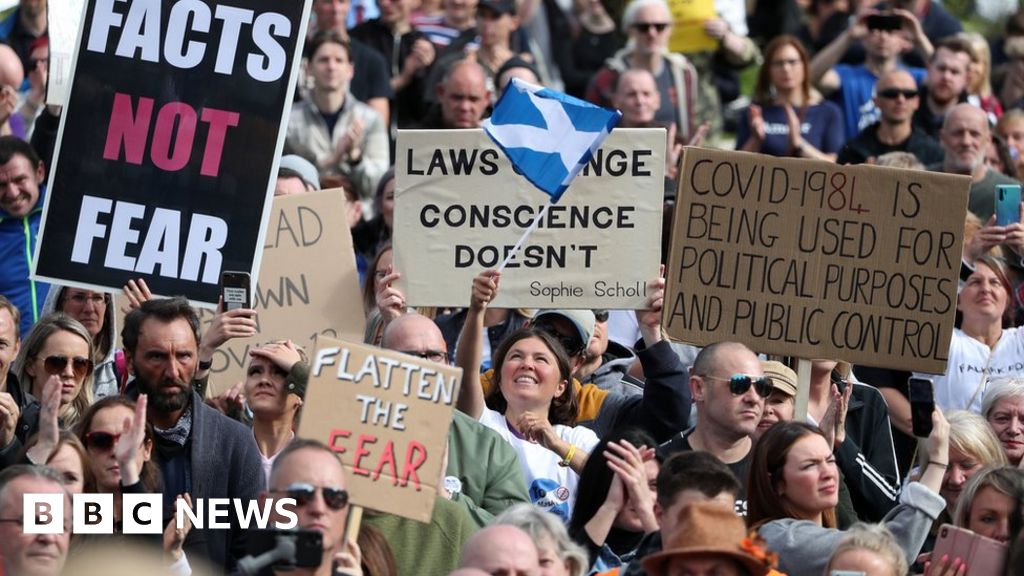 Protesters opposed to Covid-19 restrictions have gathered in Edinburgh as figures showed the highest weekly rise in cases since May.

Coronavirus sceptics, vaccine conspiracy theorists and those opposed to mandatory mask-wearing staged a rally at Holyrood.

It comes as figures showed almost a thousand people tested positive for the virus this week in Scotland.

In the past seven days there were 994 confirmed cases.

The figure is almost double the 507 new cases in the week previous.

He said: “I honestly do not understand it.

“I think it is irresponsible – do they think we’re making it up? 194 countries are making up a viral pandemic.

“I would love to have not lived through the last six months, both in my job and what we have had to do to our country and many others.

“I think it is deeply irresponsible.”

Hundreds of protesters marched to the parliament building in Edinburgh with flags and placards for the Scotland Against Lockdown protest, organised by the Saving Scotland Facebook group.

A post advertising the event said it was “time to stand up together, and listen to real scientific evidence in regards to the health of the Scottish people.”

The group said lockdown was causing “more harm than the virus” and that Scots should say “no to mandatory vaccines and masks. No to secondary lockdowns.”

Police Scotland said it had been aware of the demonstration and that officers had provided a “proportionate response” and no arrests had been made.

In the past 24 hours, the number of cases in Scotland rose by 141. There were no new deaths.

The figures showed the biggest rise was in the NHS Greater Glasgow and Clyde area where 68 new cases were confirmed.

The last time weekly cases exceeded the current total was 17 May, although there have been changes to the Scottish government’s reporting of figures since then, including incorporating the results of home testing kits from July.

The number of people who have tested positive for Covid-19 overall in Scotland now stands at 21,189 and the number of infected patients who have died remains at 2,496.

According to the government’s latest figures, NHS Lanarkshire saw another 20 cases – an increase on the 16 announced on Friday when it warned the region was close to having to reintroduce restrictions, similar to those imposed on other parts of western Scotland.

NHS Grampian, where the Aberdeen bar cluster was identified last month, has recorded an increase of just two new cases.

A total of seven cases have been discovered in Ayrshire and Arran, 14 in the Forth Valley, six in the Highlands, eight in Tayside and 14 by NHS Lothian.

A single new case was identified by both NHS Borders and NHS Dumfries and Galloway.

As of Friday night, two people were in intensive care with coronavirus and a further 251 infected people were in hospital, although that figure includes patients who may not be receiving treatment for the disease.