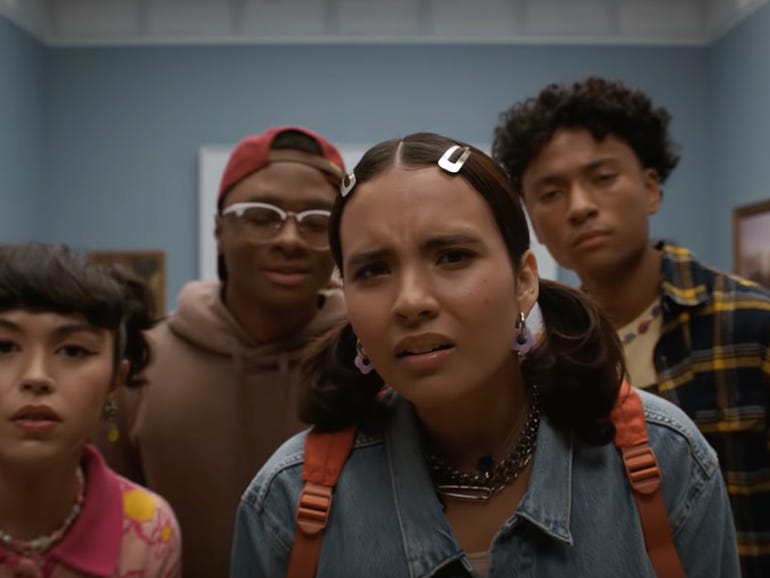 I fear Facebook knows that many believe it’s the single most heinous, cynical humanity-distortion project the world has ever seen.

I also fear that, given distortion is one of its core métiers, Facebook believes in acting like it doesn’t care.

It’s little surprise, then, that having changed its name to Meta and proclaimed itself the creator of Futureworld, Facebook has begun depicting what that world will be like.

Please feel free to prostrate yourself on your most comfortable piece of furniture. This may hurt.

Facebook has just released an ad based on a painting by a tax collector. (Facebook has always done derivative very well.) Henri Rousseau came to painting relatively late in life and was perhaps most famous for his evocative jungle work. Here, then, is his “Fight between a Tiger and a Buffalo” reinterpreted by your favorite future-jungle emperor and friends.

Young people are staring at a painting in a gallery. This is important. (Facebook needs young people, desperately.)

Suddenly the tiger comes to life and muses: “This is the dimension of the imagination.” Wait, where have you heard this before? Why, could it be lifted, word for blessed word, from Rod Serling’s “The Twilight Zone”?

Is this a meta-joke? Or might it be a sad commentary on the Metamorphosis that is to come?

Instantly, the whole jungle comes alive with movement and delightfully contemporary music. The kids respectfully twitch their shoulders in recognition of this wonderful feat.

Will they soon be worshipping at Mark Zuckerberg’s feet?

With perfect timing, the ad offers a message: “This is going to be fun.”

When Facebook says something will be one way, you can feel somewhat confident that it’ll be the opposite.

The whole ad is quaint in its ability to insult the audience, with its brazen attempt to look past the Facebook-destroyed present and into the Facebook-immolated future.

Now I think I know what the animals in the ad were trying to communicate: “Don’t do it! Please! Don’t do it! I mean, look at us! We’re trapped in a museum! You will be, too!”