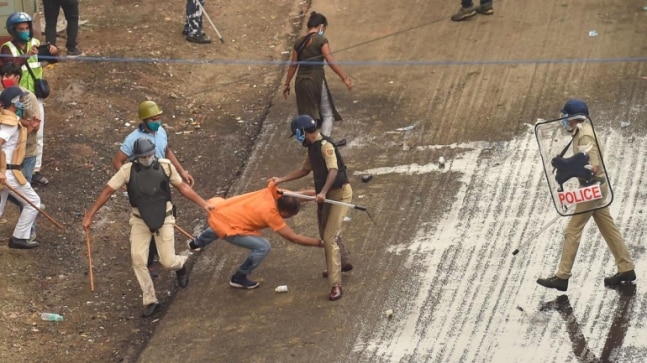 The West Bengal government has denied allegation levelled by the Bharatiya Janata Party (BJP) that the state police used water mixed with chemicals to charge at BJP workers when they were trying to march towards Chief Minister Mamata Banerjee’s office in Kolkata on Thursday.

Addressing a press conference, West Bengal Chief Secretary Alapan Bandyopadhyay said the police did not use any chemical in the water used for water cannons.

“No chemical was used in cannon water. It is wrong information. Globally, the intent to use coloured water (in water cannon) is to identify a person post dispersal for further necessary action as per the law, if required,” he said.

Hundreds of BJP workers hit the streets in Kolkata and Howrah on Thursday to protest against the West Bengal government over the “worsening” law and order situation in the state.

To prevent them from surrounding the Secretariat, police set up barricades. As the BJP workers tried to cross the barricades, police resorted to lathicharge and used water cannons to disperse the protestors. Many BJP workers, including some senior state leaders are said to have been injured in the police action.

Union Law Minister Ravi Shankar Prasad said he has been told that the water used in water cannons had some chemical in it, “which is why people have been vomiting”.

BJP MP and party’s youth wing president Tejaswi Surya too levelled similar allegations and said he will urge the Union Home Ministry to probe the matter.

Meanwhile, the police have detained 89 people in Kolkata and 24 in Howrah over today’s protest against the state government.

Chief Secretary, West Bengal, Alapan Bandyopadhyay said, “There was no misuse of power in the entire handling of protestors. They have violated the Pandemic Act.”

He said evidence of violent incidents have been found in today’s protests and police have recovered firearm from the protestors. “Policemen were also attacked and some of them have sustained injuries.”

“The applicant (BJP) last evening had mentioned several rallies and said, each rally will have around 25,000 youth. If each rally had to be allowed then that would have been a travesty as per the lockdown norms,” Alapan Bandyopadhyay said.