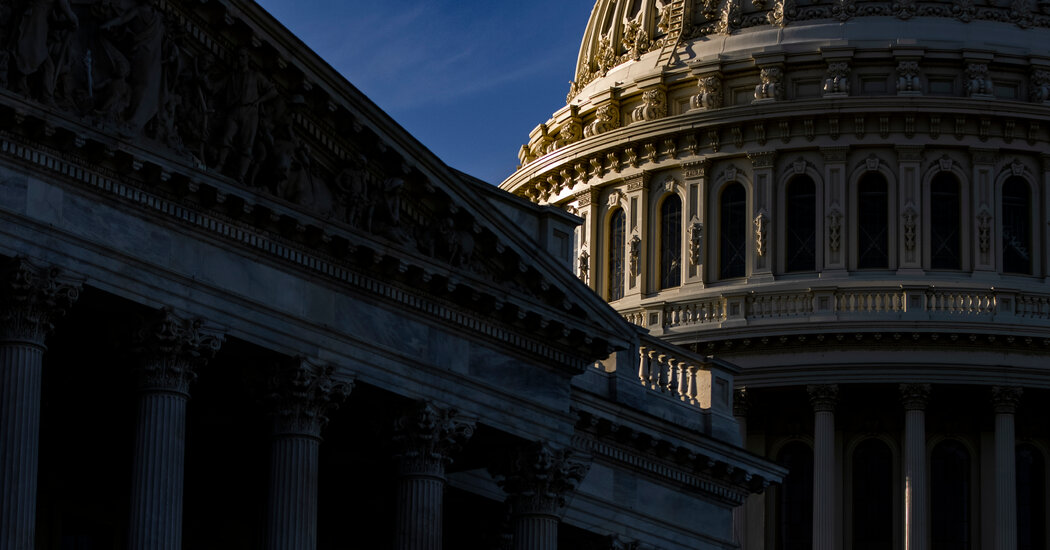 WASHINGTON — As centrist Democrats in Congress have worked to block or strip out major provisions of President Biden’s $3.5 trillion social safety net and climate plan, a string of online ads has popped up in their states and districts, lavishing praise on them.

One calls Senator Kyrsten Sinema of Arizona, who has emerged as a leading holdout on the measure, an “independent voice” and a “bipartisan leader.” Another says Representative Kurt Schrader of Oregon is pushing for the “Biden-Schrader” agenda, though he clearly opposes key portions of the president’s package. A third praises Representative Kathleen Rice of New York for “fighting for our health care and our economy,” even as she undercuts elements of Mr. Biden’s plan.

There’s one thing the ads don’t say as prominently: They’re paid for by groups funded by the pharmaceutical industry and business interests that are lobbying hard to kill or reshape crucial pieces of the president’s plan.

As Democrats labor to keep Mr. Biden’s proposal on track in Congress amid deep internal divisions, a robust influence campaign is meeting it at every turn. Business groups are working in overdrive to fight large swaths of it, such as raising taxes on the wealthy and corporations; expanding Medicare to cover dental, hearing and vision services; and proposed taxes and fees to cut down on carbon emissions.

The effort is unfolding less conspicuously than previous lobbying pushes; pandemic restrictions have limited large gatherings of lobbyists at the Capitol, so the corridor outside the Senate Finance Committee’s office, which has long been known as “Gucci Gulch,” is no longer overrun with shiny Italian shoes. But the campaign is proceeding as intensely as ever, via individual meetings, Zoom calls, fund-raisers and the airwaves.

More than 4,000 lobbyists are working on budget and spending issues, according to Open Secrets, a nonprofit watchdog group that tracks money in politics. Ten major industries have spent nearly $700 million this year on lobbying, the group said.

The U.S. Chamber of Commerce, which is lobbying to kill the bill because of its tax increases, has already spent about $30 million this year on lobbyists. The pharmaceutical industry, which is trying to defeat a proposal in the measure to bring down drug costs, has spent more than $15 million.

“Every group is reaching out and they want a meeting,” says Senator Elizabeth Warren, Democrat of Massachusetts, one of the chief champions of using the far-reaching budget bill to raise taxes on the wealthy. “If they don’t get a commitment in the first meeting, they want a second meeting — and then a third, and then a fourth. They are paying very close attention.”

The influence campaigns cut both ways. Several political action committees and other influence groups are spending freely to broaden the bill even further and push for its enactment.

Building Back Together, a group formed to support the proposals, is part of a coalition that has committed to spending $150 million on advertising to build support for Mr. Biden’s plan. The League of Conservation Voters has spent nearly $6.7 million this month on advertising, according to the analytics firm AdImpact. It is urging Congress to cut carbon pollution in half by 2030 — an element of the package — and has threatened to withhold campaign donations from Democrats who do not support it.

Perhaps no aspect of the package has generated more lobbying activity than a proposal to lower the cost of prescription drugs by empowering Medicare to negotiate their cost. The pharmaceutical lobby is spending more than $1 million on television ads to oppose it. And there are now nearly 1,500 registered pharmaceutical or health care lobbyists working lawmakers in Congress, nearly three for every member, according to Open Secrets.

Ken Frazier, the executive chairman of Merck, which is helping fund the ads, conceded in a recent call with reporters that the companies are fighting the proposal so hard because they believe it will slash their revenue. But he also portrayed the lobbying push as altruistic, arguing that a decline in profit would lead to less money for research and development into new treatments and cures for diseases.

“We have looked at what this would be,” Mr. Frazier said. “We have modeled it, and our ability to fund R & D inside Merck will be reduced by almost half.”

PhRMA, the trade group representing pharmaceutical companies, began its first ad against the package last month. In it, a woman named Sue looks into the camera, a tinge of melancholy in her voice, and says the Democrats’ plan would “make it harder for people on Medicare to get the medicines we need.” The ad airs frequently during political news shows watched by policymakers.

The association followed up that ad with another accusing politicians of wanting to decide “which medicines you can and can’t get, regardless of what your doctor prescribes.” That was followed with a print advertising campaign, and then an open letter from 30 pharmaceutical companies.

At the same time, a group called Center Forward is running targeted digital ads supporting centrist Democrats who are working to whittle down the bill. The group receives nearly $1.5 million per year from PhRMA, according to tax records.

“Thank Kyrsten Sinema and tell her to keep fighting as an independent voice for Arizona,” one of the ads stated, as Ms. Sinema was engaged in discussions with the White House about cutting items out of the president’s package.

Another, aimed at voters in Representative Scott Peters’s California district, said: “We can always count on Scott Peters to deliver.”

Pharmaceutical companies have showered donations on members of Congress, but none more than Mr. Peters, who has received more than $88,000 this year alone. He was one of three Democrats to oppose Mr. Biden’s plan to reduce the cost of prescription drugs in the Energy and Commerce Committee.

PhRMA insists its influence campaign is not trying to kill Mr. Biden’s multitrillion-dollar bill — they propose an alternative plan that would be less costly for the industry — but the package’s demise is the goal of some other groups.

The U.S. Chamber of Commerce has condemned the legislation, with its chief executive, Suzanne Clark, arguing it would “dramatically expand the size and scope of government through record levels of inflationary spending and impose massive tax increases that will halt America’s fragile economic recovery.”

“The chamber will do everything we can to prevent this tax-raising, job-killing reconciliation bill from becoming law,” Ms. Clark pledged.

No Labels, an organization funded by businesses that has close ties to centrist lawmakers including Senator Joe Manchin III, Democrat of West Virginia, is working to pass Mr. Biden’s $1 trillion infrastructure plan, but agitating to kill the broader social policy plan.

When Mr. Manchin called for a “pause” to Mr. Biden’s $3.5 trillion social policy plan, No Labels quickly put out an ad endorsing his position as “common sense.”

The lobbying has angered liberals who blame corporate influence campaigns for standing in the way of their party’s highest priorities.

“We see it on TV every day,” said Representative Pramila Jayapal of Washington, the chairwoman of the Congressional Progressive Caucus. “It’s really sad, because this is the president’s agenda.”

No Labels did not respond to a request for comment.

The American Dental Association is mobilizing its members to oppose the expansion of Medicare to cover dental, hearing and vision benefits, arguing it would be too costly for dentists. The Independent Petroleum Association of America is fighting new fees or taxes on energy companies, which they say will raise costs for customers. Likewise, the American Petroleum Institute has lobbied against a fee on methane emissions.

“While the stated goal of this vast data collection is to uncover tax dodging by the wealthy, this proposal is not remotely targeted to that purpose or that population,” the organization wrote to key lawmakers recently. The association said it had “significant privacy concerns” about the provision, which it said would “create tremendous liability for all affected parties.”

Supporters of Mr. Biden’s agenda have gone on the offensive as well.

“She’d rather protect wealthy donors,” one of the group’s ads says of Ms. Sinema, encouraging supporters to let their opposition to her be known.

Many of the centrist Democrats who are prime targets of the lobbying deny that they are swayed by the influence campaign.

Mr. Peters said it should come as no surprise that he gets robust donations from pharmaceutical companies, noting that many of them, including Eli Lilly, Pfizer, and Takeda, have offices in San Diego. He and Mr. Schrader have introduced an alternative proposal favored by the industry.

“While I carefully consider their input on the varying sides of every issue, I vote based on what I believe best serves Oregonians first and foremost — not special interests,” Mr. Schrader said.

Ms. Rice said she was merely looking for a way to cut drug costs that would be more likely to win support in the Senate than the current proposal.

Senator Bernie Sanders, independent of Vermont, who as chairman of the Budget Committee is a key architect of the social safety net plan, said the lobbying effort is as active as any he has seen.

“At a time when we are trying to pass an unprecedented piece of legislation that benefits working families, we’re seeing an unprecedented level of lobbying by the powerful special interests that want to defeat us,” Mr. Sanders said.