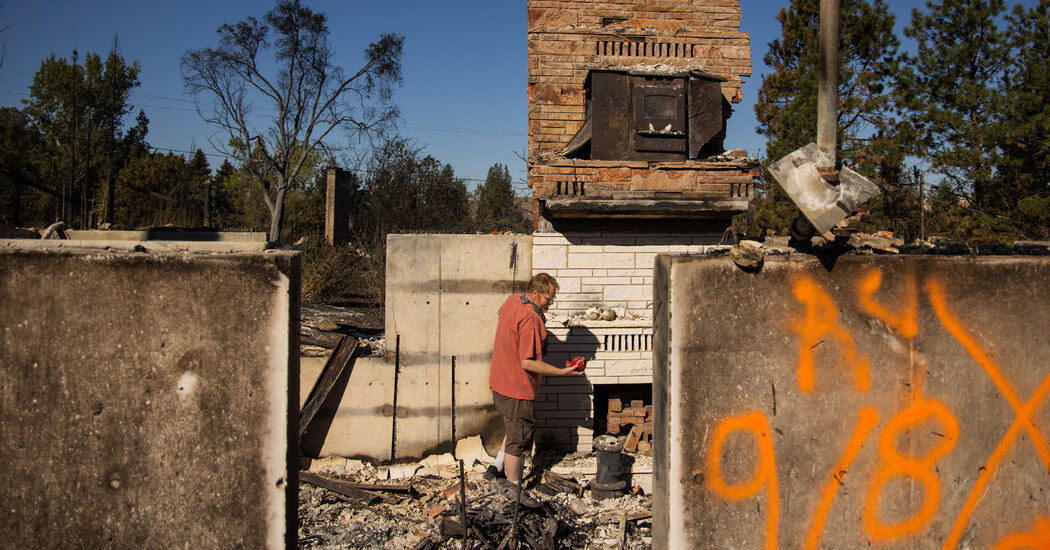 MALDEN, Wash. — The wildfire arrived with such ferocity that deputies drove through the streets of Malden, Wash., screaming for people to leave. By the time the blaze passed, not even the fire station was spared — the town’s only fire truck was still trapped inside, turned into an ashen hulk.

The devastation in Washington State was repeated up and down the parched West Coast on Wednesday as a wildfire season of unrivaled destruction continued to spread, destroying not only much of Malden but several other communities in the Northwest, while belching enough smoke to blot out the sun in San Francisco. At least seven people were killed in the recent blazes.

In California, fires have now charred some 2.5 million acres — a modern record and nearly 20 times what had burned at this time last year. In Washington, a wildfire pushed into suburban communities near Tacoma. And in Oregon, officials said hundreds and perhaps more than a thousand homes had already been destroyed.

Gov. Kate Brown of Oregon called the fires in her state an “unprecedented” situation. She cited several communities that appeared to have been “substantially destroyed”: Blue River, Detroit, Phoenix, Talent, Vida.

“We expect to see a great deal of loss, both in structures and in human lives,” Ms. Brown said. “This could be the greatest loss of human lives and property due to wildfire in our state’s history.”

Ms. Brown said that teams were fighting 35 wildfires across more than 300,000 acres, and that smaller fires were still erupting. Mass evacuations were continuing, she said, and some people had been rescued from rivers.

At least seven victims were discovered on Wednesday, and officials feared that they could find more once rescue crews reached some of the areas hardest hit by the fires.

Three people were found dead in Butte County, Calif.; two people in a vehicle east of Salem, Ore.; and one near the Ashland area, according to the county sheriff’s offices. At the scene of the Cold Springs Fire, in northern Washington, authorities said a 1-year-old boy died and his parents were in critical condition after they attempted to flee their property in Okanogan County. Deputies found the family along the bank of the Columbia River.

In Malden, which had not confirmed any deaths, Royle Hehr was one of the people who returned to find his home and the surrounding community largely wiped out.

Mr. Hehr used to run a flood and fire restoration business in Arizona, becoming witness to the disastrous loss and heartbreak caused by dozens of fires. But all that firsthand experience was not enough to prepare him for the rush of flames that moved into his new community of Malden, an old railroad town in eastern Washington’s Palouse grain country.

On Wednesday, he stood outside the ash-filled foundation of what was once his home, wearing cutoffs and a shirt — the only items he escaped with when sheriff’s deputies raced through town on Monday, using loudspeakers to urge everyone to evacuate.

“I’ve seen this kind of loss before, dozens of times,” Mr. Hehr, 59, said. “I’ve worked with people who lost everything. I can’t believe this devastation.”

The fire consumed not only most homes in Malden, but also City Hall, the post office, the library and the fire station.

On Wednesday, volunteers handed out doughnuts and bottled water. Portable toilets and hand-washing stations were set up as wispy tails of smoke from smoldering debris — homes, outbuildings, trees, vegetation and power poles — corkscrewed into the late-summer skies.

Four miles down the two-lane county road, three or four large grain bins, filled with recently harvested wheat, continued to burn. One had split open, its commodity ablaze on the ground like sawdust logs.

Scott Hokonson, a member of the Town Council and a volunteer firefighter, said the fire had spread “like a bomb went off.” His home was among those destroyed.

This wildfire season has been devastating all along the West Coast, fueled by an unusual summer wind event in the Northwest, a record-breaking heat wave followed by wind in California and the early signals of climate change, as warmer average temperatures leave lands parched and vulnerable to a fire started by a spark.

In California, the Bear Fire north of Sacramento grew an astonishing 230,000 acres overnight, forcing thousands of people to flee their homes. The fire was burning in some of the same areas as the Camp Fire in 2018, which destroyed the town of Paradise.

Smoke mixed with fog in San Francisco, where office towers were illuminated as if it were night and cars kept their headlights on all day. In Central California, three firefighters were injured while attempting to save their fire station. They had to be airlifted to a hospital, with one of them in critical condition.

The wildfires, fanned by stiff winds and fueled by parched lands, left some cities with little time to evacuate. In Phoenix, Ore., residents reported that they were unable to get back to their homes to retrieve pets as the fires moved along the Interstate 5 corridor, stoked by winds as high as 45 miles per hour.

As he looked over his still-smoldering city on Wednesday, Mayor Chris Luz estimated that the area might have lost up to 1,000 houses and apartment units. He said the downtown area was decimated, with many businesses lost, and fires continued to smolder.

Officials had not found anyone who died in the fire, but Mr. Luz worried that some people might not have been able to get out in time. “It’s just devastating,” he said.

Nearby, in the city of Talent, City Manager Sandra Spelliscy expressed a similar worry as she examined the scene at Mountain View Estates, a mobile home community for people 55 and older.

Ms. Spelliscy said residents in the city had little time to evacuate and were forced to leave belongings behind. The evacuation was complicated by traffic that had diverted off Interstate 5 as a result of the highway’s closure. But she said police officers and other crews worked to get people out of the city, so she was hopeful that everyone managed to escape in time.

Washington State officials also continued to battle wildfires on Wednesday, including one that forced evacuations from the city of Bonney Lake, just outside of Tacoma. Helicopters with buckets repeatedly collected water from a nearby lake to dump on the fire.

In Malden, residents were trying to figure out what the future would look like. With the town’s post office destroyed, only a blackened brick shell remaining, some residents wondered aloud where they would get their mail ballots for the November election. Officials said temporary mail service would be established in nearby Rosalia.

Mr. Hehr and his family had moved to Malden because of its small size and cheap real estate. He paid $33,000 in cash for the 1910 frame house built for railroad executives when Malden was a major crew change point for the transcontinental Milwaukee railroad.

Retired on $1,200-per-month disability after being injured at work, Mr. Hehr said he did not buy fire insurance for his home because the $118 a month was too pricey for his budget.

Another resident, Brent Bertsch, said he moved to Malden from Seattle in 2017 because of low housing prices. His 1,200-square-foot farmhouse was still standing when he returned after the evacuation.

He was at a loss to say why his house escaped the flames, especially after they destroyed a nearby garage containing his tools, including his late father’s toolbox.

After being evacuated, Mr. Bertsch said, he had driven around the flames and returned to Malden in an attempt to save his home, driving his Toyota Prius through “an ash-and-smoke blizzard” that he could barely see through. “I could feel the blast of heat coming through my car’s windows,” he said.

The fire was hopscotching in an unpredictable pattern, destroying two or three homes and buildings in one spot, then skipping over others that were left mostly unscathed.

Once at his house, he turned on a garden hose before a team of firefighters arrived with their larger hoses. His neighbors, a couple both in their 80s, also safely escaped and their house also survived.

Despite the devastation, Mr. Bertsch said he did not think the massive fire would be Malden’s demise. “It spells the end for some people, I’m sure, but for others it spells a beginning,” he said. “As tragic as it is, when something like this happens, it opens a lot of space, which creates opportunities for others.”