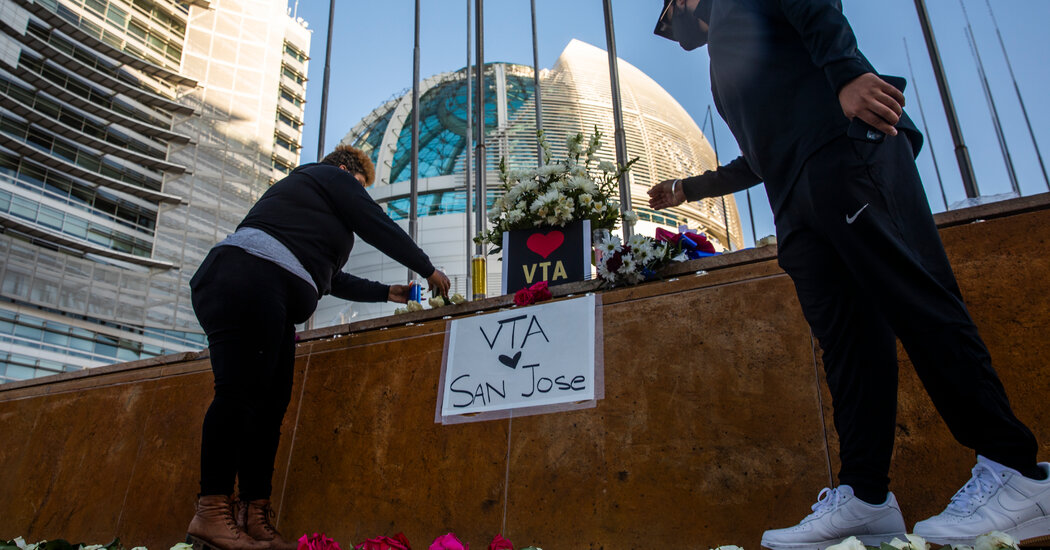 What the authorities are saying

Deputy Davis said that the police started receiving 911 calls at about 6:34 a.m. local time. He said that deputies arrived at the hub and found “multiple victims that were shot at the scene.” He later told reporters that eight people were killed. Officials late Wednesday announced the death of a ninth victim at a nearby hospital.

V.T.A. employees were among the victims, he said. The gunman was also dead, Deputy Davis said. He appeared to have taken his own life, officials said.

Senior California law enforcement officials identified the gunman as Samuel James Cassidy, 57, a maintenance worker who had been with the V.T.A. for at least a decade.

Deputy Davis said he did not know what kind of weapon was used or a possible motive. He added that bomb squad teams were working to make the area safe.

Mayor Sam Liccardo of San Jose said in an interview that “at least several people” were killed in the shooting. He said the facility had been evacuated.

“It appears that the suspect’s house is on fire but that there was nobody inside,” Mr. Liccardo said. “There’s a strange connection here between arson and the shooting.”

Gov. Gavin Newsom of California said the shooting raised stark questions for the country. “What the hell is wrong with us,” he said, “and when are we going to come to grips with this?”

Where the shooting happened

Glenn Hendricks, the chairman of the V.T.A. board of directors, told reporters on Wednesday that the shooting took place in the yard of the facility, not “the operations control center.”

He described the site as a maintenance yard where V.T.A. vehicles are maintained and dispatched from. He added that the V.T.A. would suspend light rail service on Wednesday. “It’s just a horrible tragedy that has occurred,” he said. “I have no information about the investigation or what happened.”

Brandi Childress, a spokeswoman for the V.T.A., said employees were on the job at the time of the shooting.

“It is where we have dispatchers and maintenance,” she said. “They get up early and they are there. That is why the focus is on containing and evacuating employees. It is where we store and maintain all of our trains.”

What we know about the gunman

Mr. Cassidy was described as someone who made those around him fearful.

Mayor Liccardo said co-workers had “expressed generalized concerns about his mental health.” Connie Wang, 58, a former girlfriend of the suspect, said she had not seen or spoken to him in 12 years, but described him as someone who was “not mentally stable.”

Doug Suh, a real estate agent who lived across the street from Mr. Cassidy in a suburban neighborhood of cul-de-sacs and palm trees, said his neighbor was short-tempered. “I was afraid of him,” Mr. Suh said. “My wife was scared of him, too.”

Family court records show that Mr. Cassidy was married for 10 years before divorcing in 2004. The couple had no children.

What we know about the victims

The medical examiner’s office in Santa Clara County identified eight of the victims on Wednesday night, and then later announced the death of a ninth at the Santa Clara Valley Medical Center. They ranged in age from 29 to 63.

Earlier on Wednesday, Christina Gonzalez, a cousin of Mr. Rudometkin, had rushed to a Red Cross center where relatives of transportation authority employees were directed to wait for news. She said Mr. Rudometkin had been at a union meeting in the morning. “Very proud, loved his job and just always stood up for everyone’s rights,” she said of her cousin.