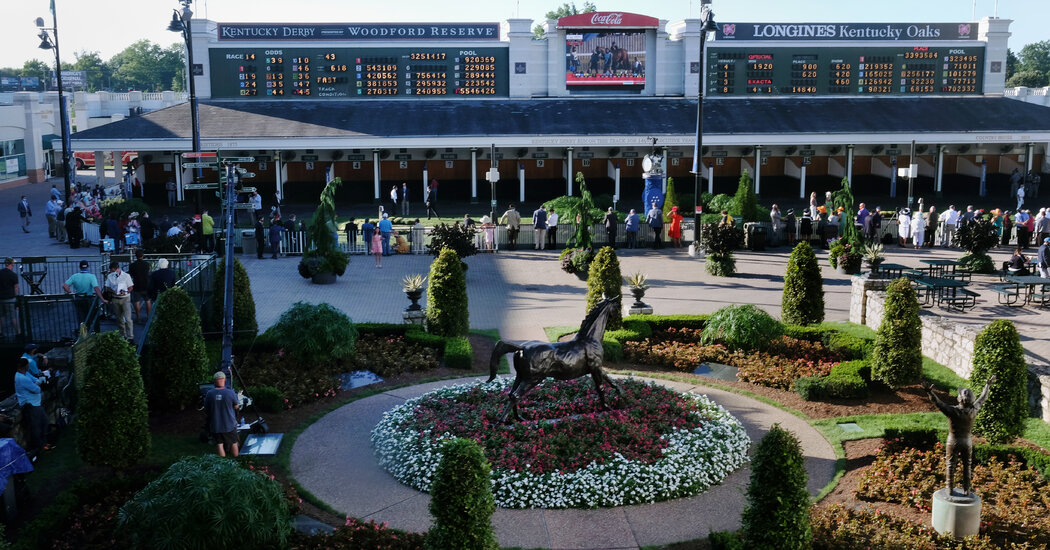 LOUISVILLE, Ky. — The 146th running of the Kentucky Derby is going to be one of the strangest editions of America’s most famous race, beginning with the date of the race: The first Saturday in September rather than its traditional place on the calendar in May.

Like many other sporting events this year, the Derby will not have its usual crowd buzz or pageantry. No swells with pocket squares, or dressed up women in fancy hats. There will be no spectators present because of the coronavirus pandemic — or not many, at least, as horse owners will be allowed on the grounds.

The upended calendar, however, did open the door to some new trainers and horses with unusual credentials. The trainer Saffie Joseph Jr., for example, is here for the first time with a colt named Ny Traffic, who tuned up by running second in the Matt Winn and Haskell Stakes.

“The Derby means everything to me,” said Joseph, 33, a native of Barbados. “That’s why we came here. We hoped to one day win the Kentucky Derby, and now, to be in the position where we have a chance, we are very fortunate and blessed. We are just trying to take it all in.”

The race will go on, under protest.

With the Derby running in the city where Breonna Taylor was killed in her apartment by the police in March, it has become a focus of the Black Lives Matter movement. A coalition of activist groups has called for a boycott of the race and its sponsors. They have promised to conduct a peaceful protest in a park near Churchill Downs on Saturday.

The racetrack’s leadership released a statement Thursday to explain their decision to hold the races.

“We know there are some who disagree with our decision to run the Kentucky Derby this year,” the statement said. “We respect that point of view but made our decision in the belief that traditions can remind us of what binds us together as Americans, even as we seek to acknowledge and repair the terrible pain that rends us apart.

“Our sport shares a disconcerting history that led to the exclusion of Black jockey participation through the years,” the statement continued. “The legacy of the Kentucky Derby begins with the incredible success of Black jockeys. We feel it is imperative to acknowledge the painful truths that led to their exclusion. Churchill Downs strongly believes in preserving and sharing the stories of the Black jockeys who are a critical part of this tradition. This is not a new commitment, but we continue to seek ways to share these stories and honor these athletes.”

An African-American jockey, Oliver Lewis, won the inaugural Kentucky Derby in 1875. He claimed victory aboard Aristides, a horse trained by Ansel Williamson, who was born into slavery. In the years after the Civil War, Black jockeys dominated horse racing, winning 15 of the first 28 Kentucky Derbys and becoming celebrities, much like today’s N.B.A. stars.

In their statement, Churchill Downs officials hinted at changes.

“We recognize that people in our community and across our nation are hurting right now,” it said. “The atmosphere of the Kentucky Derby will be different this year as we respond to those calls for change. This will be a Derby unlike any other. As it should be.”

There was some speculation as to whether or not “My Old Kentucky Home” would be played as the horses come on to the track, as has been tradition since 1921. The song, written by Stephen Foster, has a complicated history. The original lyrics, according to Smithsonian Magazine, were not a tribute to the Old South but a condemnation of Kentucky slave owners “who sold husbands away from their wives and mothers away from their children.”

In a tweet Friday, the Churchill spokesman Darren Rogers said the song, indeed, would be part of the pre-race pageantry. But moment of silence will take place before the playing of the song.

“After careful consideration, My Old Kentucky Home will be played this year prior to the @KentuckyDerby,” Rogers posted on the racetrack’s official public relations account. “However, the 100-year tradition of singing the state song of Kentucky has been thoughtfully & appropriately modified & will be preceded by a moment of silence and reflection.”

History is on the line for a trainer.

Tiz the Law, the Belmont Stakes champion, was made the prohibitive 3-5 morning-line favorite to win what is this year the second leg of the Triple Crown. The New York-bred colt has won six of his seven races in dominant fashion, but his only defeat came here, beneath Churchill’s iconic twin spires, last year.

At 82, Barclay Tagg would become the oldest trainer to win a Derby. He likes how Tiz the Law is training.

“He had a very nice gallop,” Tagg said on Friday. “Right speed. Everything was comfortable. He pulled up nicely and came back nicely. We’re all good.”

He also knows how he wants his jockey, Manny Franco, to ride the son of Constitution, who won three starts in 2014.

“I’d like for us to be laying third all the way around until we get down for business,” Tagg said. “I’m very confident in our horse. He’s a very nice colt. I hope he wins it. He’s a good horse, good horses do good things.”

A new gate could make for a cleaner start.

A new 20-horse starting gate will be used, a change that track officials hoped would ensure a clean and fair break in what usually is a roughly ridden race, especially into the first turn. The gate is 65 feet, and the stalls are two inches wider than the stalls of its predecessor.

“The most important part of this is eliminating that gap between the 14 and 15 of the auxiliary gate,” Ben Huffman, the Churchill Downs racing secretary, told the Louisville Courier-Journal. “It’s farther away from the inside rail and the outside goes closer to the inside, and it’s better for everybody.”

Unfortunately, no matter what happens on Saturday, expect the evidence to be inconclusive. With the late scratches of King Guillermo on Thursday and Finnick the Fierce on Friday morning, the 16-horse field will be compact by Derby standards.

Looking for a horse to upset Tiz the Law? Then keep an eye on three horses surrounding him in the gate. Inside him in the No. 15 hole is Ny Traffic (20-1) and No. 16 Honor A. P. (5-1), and to his outside in the No. 18 hole is Authentic (8-1). Like Tiz the Law, each will try to break sharply and establish themselves in the front of the pack.

Taking his place in the owner’s box, for himself and for his grandfather.

Looking for a good karma bet with a feel-good back story? Try Necker Island at 50-1.

He is partly owned by Greg Harbut, a rare African-American owner in horse racing. His grandfather Tom Harbut bred and owned a horse that ran in the 1962 Derby, and his great-grandfather Will once graced the cover of The Saturday Evening Post alongside the magnificent athlete he cared for, the great Man o’ War.

He, along with his fellow Black owner Ray Daniels, heard calls to boycott America’s most famous race in solidarity with the Black Lives Matter movement. Instead, Necker Island is running, and they are going to do something Tom Harbut was prohibited from doing: take their place in the owner’s box.

“This is a different kind of Kentucky Derby — one held in September, not May, with no fans instead of 170,000 of them,” Harbut said. “But we are here, and people will know my family’s contributions to the sport. They will know how African-Americans built horse racing. And, hopefully, more of us will return to it.”