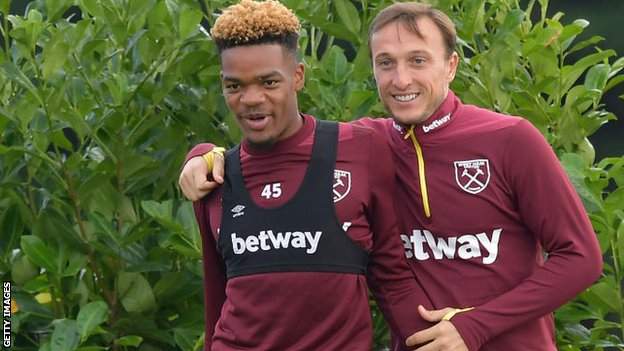 West Ham captain Mark Noble says he is angry after the club sold winger Grady Diangana to West Brom for an £18m fee.

The 22-year-old spent last season on loan at The Hawthorns, helping them clinch promotion to the Premier League.

The former England Under-21 player made 21 appearances for the Hammers after coming through the club’s academy.

“As captain of this football club I’m gutted, angry and sad that Grady has left, great kid with a great future,” Noble wrote on Twitter.

The skipper’s post was liked by team-mate Declan Rice, while defender Arthur Masuaku replied with a broken heart emoji and many Hammers fans expressed dissatisfaction with club owners David Sullivan and David Gold.

A West Ham statement said the decision to sell Diangana was made “reluctantly but, ultimately in the best interests of the club”.

“The money received for Grady will be reinvested entirely in the team, in line with the manager’s targets,” it added.

“We believe that this will give us the best possible chance of ensuring we have a balanced squad to compete in the Premier League and capable of reaching our objectives and ambitions this season.”

“West Ham was all I had known before last season and I’m sure people will understand that I felt some sadness at leaving,” he said,

“I’m still young and last year was my first season in senior football. I feel I am only going to get better.”

It was Albion’s second signing of the day after they sealed a four-year deal for Wigan Athletic defender Cedric Kipre.

Kipre, who was born in Paris but has represented Ivory Coast at youth level and been part of the senior squad, came through at Paris St-Germain before spells with Leicester City and Motherwell.

Find all the latest football transfers on our dedicated page.