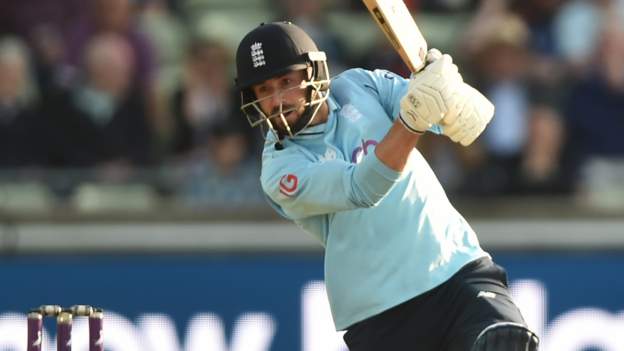 James Vince hit his first international century as England pulled off an electrifying chase of 332 against Pakistan to complete a 3-0 clean sweep in the one-day international series.

Vince, so often criticised for his inconsistency, scored 102 from 95 balls as his side won by three wickets, despite a supreme 158 by Pakistan captain Babar Azam.

After an action-packed start to their chase, England were 165-5 in the 24th over before Vince put on 129 with Lewis Gregory to delight the raucous Edgbaston crowd.

With 38 runs needed from 48 balls, Vince hit Haris Rauf to mid-on and Gregory fell for 77 from 69 balls in the Pakistan fast bowler’s next over to set up a tense finish.

It was the highest successful chase at Edgbaston after Pakistan posted 331-9 from their 50 overs – an innings built around a partnership of 179 between skipper Babar and Mohammed Rizwan, who scored 74 from 58 balls.

Victory gives world champions England maximum points as they look to qualify for the 2023 World Cup.

The sides meet in a three-match Twenty20 series next, starting on Friday.

The chance for Vince to play this innings would not have come but for the Covid-19 outbreak that ruled out England’s entire original squad.

Few players have taken up as much air time as him in recent years – England fans often frustrated he could not transfer his undeniable talent from domestic cricket into the international arena.

But at Edgbaston Vince had to fill the role of a senior player. When captain Ben Stokes was caught behind sweeping spinner Shadab Khan, 181 runs were still needed from 180 balls.

The pair batted sensibly but always looked to take the attacking option and were able to capitalise on poor Pakistan bowling and fielding to find boundaries.

Vince’s innings was packed with typically classy off-side strokes. When he brought up his century from 91 balls he swung in his bat through the air in a celebration packed with relief.

Gregory had just smacked two sixes over the leg side before Vince fell, but ultimately an unwise drive did not matter.

This was the innings he finally delivered for England.

Babar’s innings will go down as one of the best in a losing cause in ODI cricket.

He had been dismissed for a duck and for 19 by Saqib Mahmood in his side’s heavy defeats in the first two games but here he responded with a masterful knock.

Pakistan’s approach was the opposite to England’s – they made a patient start before accelerating through their innings.

Tied down by Mahmood and, after the loss of Fakhar Zaman for six, it took Babar 15 balls to get off the mark and he used 72 deliveries reaching 50.

But the classical, wristy right-hander went through the gears perfectly, going from 50 to 100 in 32 balls and scoring his next 50 runs in just 31 deliveries.

Matt Parkinson produced a sensational turning delivery to bowl Imam-ul-Haq through the gate for 56 but Babar played him perfectly.

He hit the leg-spinner for two straight sixes and repeatedly hammered England’s seamers through mid-wicket when they bowled short, in a stand of 179 with Rizwan.

Babar was eventually dismissed for his highest international score in the final over, caught at short third man after miscuing a Brydon Carse slower ball.