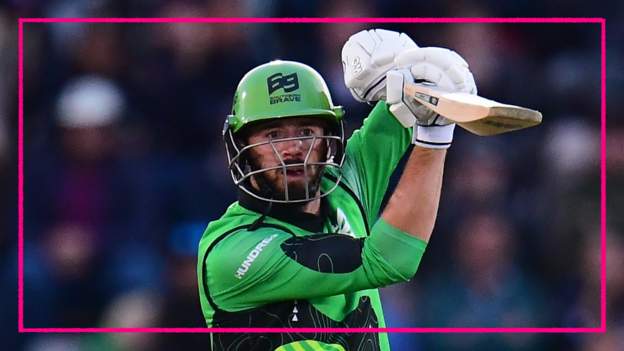 James Vince led Southern Brave to their first win in the men’s Hundred with a four-wicket victory over Birmingham Phoenix in a gripping game at the Ageas Bowl.

Having lost their opening two matches, Brave completed the highest run chase in the men’s competition as captain Vince starred with a superb 60 off 38 balls.

Needing nine to win off the final five deliveries, Chris Jordan and Liam Dawson saw their side home with three balls to spare in Southampton.

Earlier, Liam Livingstone smashed 68 from 44 balls and shared a 104-run unbeaten stand with Miles Hammond, who scored on 44 from 29 deliveries.

The win takes Brave up to sixth in the table, one place behind Phoenix.

Yesterday we asked whether Trent Rockets – with three wins out of three – were the team to beat?

Had it been a third straight loss for Southern Brave today, we may have been asking whether they are the competition’s biggest disappointment.

But instead one of the pre-tournament favourites came fighting back from their losses to Rockets and Welsh Fire – and they have their skipper to thank.

Put simply, the classy Vince was a delight to watch.

It was a captain’s knock which showcased both beautiful stroke-making with more purposeful power shots.

He punished poor bowling from Tom Helm by hitting 18 from five consecutive balls, including a six which cleared the seats.

Vince made batting look effortless, perhaps best illustrated with a lofted cover drive off the bowling of Benny Howell for six after which he, rightly so, held the pose and admired his own work.

It was Chris Jordan’s 17 off nine deliveries and some more wayward bowling from Helm – who conceded 40 runs from 17 deliveries – which saw Brave over the line, but it all started at the top of the order with Vince.

Phoenix will be ruing a missed opportunity after posting a mammoth score.

And it was almost the Liam Livingstone show, the 27-year-old reaffirming his reputation as one of the game’s biggest hitters.

The England batter did have his share of luck though.

Having clubbed Colin de Grandhomme for six, Livingstone miscued the following delivery and was caught by Vince at mid-off.

There were high fives and pats on the back in the Brave huddle, before the umpire relayed a no-ball signal given to him by his TV counterpart.

Brave heads fell and shoulders slouched as Livingstone tried his best to hide a mischievous smile.

The very next ball, a free hit, he smashed for six.

From winless to contenders? – reaction

“Their bowling looks very strong and they have a lot of pace.

“They had a slow start in the tournament but they are a team that can contend.”