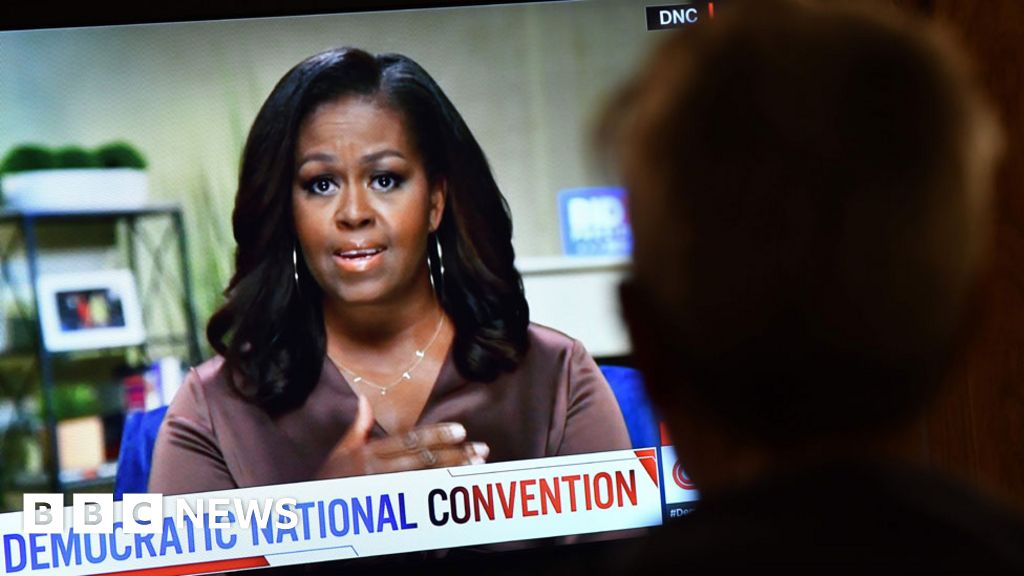 Michelle Obama has launched a stinging attack on US President Donald Trump as Democrats prepared to crown Joe Biden as their White House challenger.

“Donald Trump is the wrong president for our country,” said the former US first lady in an emotional recorded message to the Democratic convention.

Disaffected members of Mr Trump’s Republican party also piled in on him at the Democratic party conference.

Because of the coronavirus outbreak, Democrats scrapped plans for a crowded party extravaganza with balloon drops and all the other political razzmatazz in Milwaukee, Wisconsin.

But it is unclear whether the largely virtual schedule of pre-recorded speeches with no live audience can generate the same level of enthusiasm as pre-pandemic gatherings of the party faithful.

Republicans will face the same challenge as they make their case for four more years in the White House at a drastically scaled-down convention next week.

What did Michelle Obama say?

“You simply cannot fake your way through this job,” she said, wearing a necklace that said “Vote” and sitting in a living room.

She added: “Our economy is in shambles because of a virus that this president downplayed for too long.”

Mrs Obama added: “Stating the simple fact that a black life matters is still met with derision from the nation’s highest office.

“Because whenever we look to this White House for some leadership, or consolation or any semblance of steadiness, what we get instead is chaos, division and a total and utter lack of empathy.”

She said the last four years has been difficult to explain to America’s children.

“They see our leaders labelling fellow citizens enemies of the state, while emboldening torch-bearing white supremacists.

“They watch in horror as children are torn from their families and thrown into cages and pepper spray and rubber bullets are used on peaceful protests for a photo op.”

Mrs Obama continued: “Donald Trump is the wrong president for our country… he is clearly in over his head, he cannot meet this moment.”

“We have got to vote for Joe Biden like our lives depend on it,” she said.

What else happened on Monday?

The opening night of the convention, which was compered by former Desperate Housewives actress Eva Longoria Baston, was titled by party organisers “We the People”.

John Kasich, a former Ohio governor who ran against Mr Trump in 2016, recorded a message calling on Americans to deny the president a second term in office.

Mr Kasich endorsed Mr Biden, saying: “We can all see what’s going on in our country today and all the questions that are facing us, and no one person or party has all the answers.

“But what we do know is that we can do better than what we’ve been seeing today, for sure.”

Bernie Sanders, the left-wing Vermont senator who was Mr Biden’s fiercest competitor during the Democratic party’s contest to pick a challenger to Mr Trump, also recorded a message.

While their inclusion left the Biden team claiming a broad coalition, some Democrats grumbled that the Republicans used up precious time that could have benefited progressive speakers or lesser-known rising stars.

But Cedric Richmond, a Louisiana congressman and Biden campaign co-chair, rejected that idea, saying, “remember tonight’s theme is ‘We the People,’ not ‘We the Democrats’.”

The opening night also featured pre-recorded messages from everyday Americans, including repentant former Trump voters and a woman who blamed her father’s death of Covid-19 on the president.

How did President Trump hit back?

Speaking to the BBC on Air Force One as he flew back from a trip to the presidential swing-voting states of Minnesota and Wisconsin, Mr Trump lashed out at Mr Kasich.

During a campaign speech earlier in the day in Mankato, Minnesota, Mr Trump warned that if Mr Biden won in November, news outlets would lose their audiences.

“Nobody’s going to want to cover sleepy Joe,” Mr Trump said. “We will end up with one very boring socialist country that will go to hell.”

He also said the coronavirus-crippled US economy was a heaven-sent test for him.

Mr Trump on Monday also confirmed he would accept the Republican nomination for a second term during a live speech at the White House next week.

His plans have been criticised by Democrats and even some fellow Republicans.

How will the rest of the Democratic convention play out?

The four-night jamboree will culminate in Mr Biden’s speech on Thursday in a mostly empty ballroom in his home state of Delaware.

On Wednesday, his vice-presidential pick, Ms Harris, the daughter of immigrant parents from India and Jamaica, will accept her nomination as the first woman of colour to be a running mate on a major party presidential ticket.

More on Joe Biden and the 2020 election

BIDEN ON KEY ISSUES: What the US presidential hopeful wants to do

POLLS: Who is ahead – Trump or Biden?

US ELECTIONS 2020: A really simple guide to the US election

ELECTORAL COLLEGE: What is it?

ONE-STOP-SHOP: All our US election coverage

The US election process can be confusing. The BBC is here to help make sense of it. Please put your questions below.

In some cases, your question will be published, displaying your name, age and location as you provide it, unless you state otherwise. Your contact details will never be published. Please ensure you have read our terms & conditions and privacy policy.