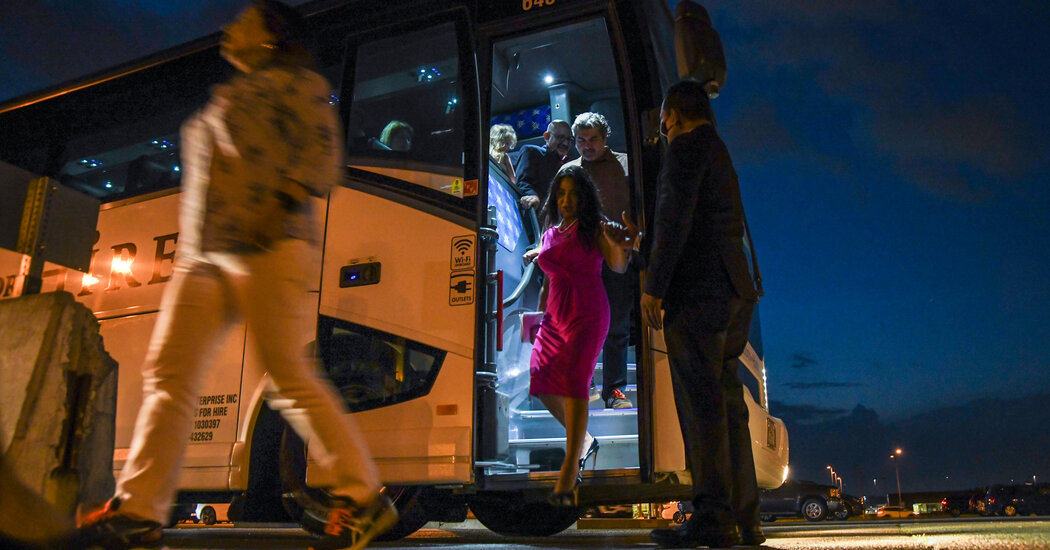 STERLING, Va. — Texas Democrats fled the state on Monday in a last-ditch effort to prevent the passage of a restrictive new voting law by the Republican-controlled Legislature, heading to Washington to draw national attention to their cause.

The group left Austin in midafternoon on a pair of chartered flights that arrived at Dulles International Airport just before sunset. Fifty-one of the 67 State House Democrats flew on the planes, leaders of the delegation said, and several others arrived separately in Washington; that’s enough to prevent Texas Republicans from attaining a quorum, which is required to conduct state business.

The hastily arranged departure added a cinematic element to the partisan wrangling in a state with a colorful political history. Democrats have fled to neighboring states in the past to try to block legislation, including in 2003, when they traveled to New Mexico and Oklahoma in an effort to avoid Republican attempts to redraw congressional districts.

The move could paralyze the Legislature for weeks if Democrats remain out of state until this special session ends in August. Still, it lays bare their limited options long-term in a Legislature where the Republicans hold the majority in both chambers. Parliamentary procedures and efforts to add amendments can delay the process but not derail it. Republicans said Monday the Democrats’ gambit would ultimately fail.

“We will eventually get it done, this special or another,” he added.

Nevertheless, by traveling en masse to Washington, the Texas Democrats were hoping to apply pressure to Democrats in the U.S. Senate who so far have been unable to pass federal legislation to address the issue.

“We have to decide if we are going to stand for democracy,” said State Representative Trey Martinez Fischer, who organized the effort to leave the state. “We want the nation to join us and we want the U.S. Senate to hear us and act.”

The move comes just one day before President Biden is scheduled to deliver a major speech on voting rights in Philadelphia. Activists have been imploring the administration to address the issue with more urgency.

In a news conference at the White House on Monday, Jen Psaki, the White House press secretary, said Mr. Biden would focus his speech on a broad and pointed response to new restrictive voting legislation passed across the country. The recently passed Republican-sponsored voting laws, Ms. Psaki said, were “the worst challenge to our democracy since the Civil War.”

On Monday night, members of the Texas delegation reiterated their resolve in a 15-minute news conference from an airport parking lot, which concluded with members singing the chorus of “We Shall Overcome.”

The group has scheduled a news conference for 10 a.m. Tuesday at the Capitol, but has no concrete plans in Washington beyond that.

The flight by House Democrats marks the second time in six weeks they have resorted to extreme measures to try to prevent passage of a new voting bill. Hours before the Legislature’s regularly planned session ended in May, Democrats walked out of the Capitol chamber to deny Republicans a quorum, though in that instance they traveled only a few miles to a nearby church.

Gov. Greg Abbott, a Republican, responded to the initial walkout by calling a 30-day special session that began Thursday. Along with the voting proposals, the governor called for the Legislature to take up other measures Democratic lawmakers oppose: combating perceived “censorship” on social media platforms; banning the teaching of “critical race theory” in public schools; and restricting transgender athletes from competing in school sports.

Leading Democrats on Monday praised the Texas lawmakers for making a stand on a critical issue. “I applaud them standing for the rights of all Americans and all Texans to express their voice through their vote unencumbered,” Vice President Kamala Harris said at an event in Detroit.

Senator Amy Klobuchar of Minnesota, who chaperoned a group of Texas House Democrats when they visited the Capitol after their first walkout, said the Texans’ arrival will spotlight the “many vehicles” in which to pass federal voting reforms.

“They are coming to the one place that should give them salvation and it’s time to get it done,” she said in a phone interview.

But Texas Republicans suggested that Democrats were abdicating their responsibilities by leaving the state.

Tony Tinderholt, a conservative Republican from Arlington, said the Democratic lawmakers “should be held accountable” if they are not back at their seats when the House resumes work at 10 a.m. on Tuesday. Mr. Tinderholt has introduced a resolution that would punish members who leave the chamber during deliberations to break a quorum.

“We all took an oath of office, we have a duty,” he said. “If you work for a company and you didn’t like what they were doing that day and you decided to skip work, I think that most people would be fired and punished.”

Dade Phelan, the Republican speaker of the state House, pledged to employ “every available resource” to secure a quorum, suggesting he would use lawyers and legal experts to hunt for options under the state constitution and House rules. He rebuked Democrats for leaving while the Legislature’s funding — which Mr. Abbott vetoed and was on the docket for the special session — remains in limbo.

And Dan Patrick, the lieutenant governor, mocked the Democrats by tweeting a photo that showed them preparing to travel with a case of beer on one of the seats.

No Democratic State Senate members accompanied the House members, and Republicans expressed hope that Senate members would show up for Tuesday’s session, though no bill can pass with the approval of only one chamber. One Texas Democratic official said that as many as nine of 13 Democrats in the State Senate could join them in Washington on Tuesday, but that is two short of the number required to prevent a quorum.

State Senator John Whitmire, a Democrat from Houston, said that he expects his chamber to take up the voting legislation Tuesday.

“Senate Democrats are keeping all their options open,” Mr. Whitmire said. “I don’t know that a consensus has been built.”

The Fight Over Voting Rights

After former President Donald J. Trump returned in recent months to making false claims that the 2020 election had been stolen from him, Republican lawmakers in many states have marched ahead to pass laws that make it harder to vote and that change how elections are run, frustrating Democrats and even some election officials in their own party.

Over the past several months, Democrats across the country have been grappling with one of the most sweeping contractions of voting access in generations. Republican-controlled legislatures in more than 14 states have passed election laws that include broad new restrictions to voting.

But the bill in Texas is among the most expansive and sweeping efforts to restrict voting in a state that already ranks as one of the most difficult in the country to cast a ballot, with Democrats and voting rights groups contending that passage of the bill threatens the very democratic foundations of the state.

Among other provisions, the latest Republican proposal would ban 24-hour voting and drive-through voting; add new voter identification requirements for voting by mail; increase the criminal penalties for election workers who run afoul of regulations; and greatly expand the authority and autonomy of partisan poll watchers.

Over the weekend, the Texas House and Senate, both controlled by Republicans, advanced legislation out of committee to the full chamber, after marathon sessions that, in the case of the House, lasted nearly 24 hours. G.O.P. leaders planned to move toward a final vote starting Tuesday.

Mr. Abbott, the governor, is up for re-election next year and faces primary challenges from multiple conservative Republicans. He has said that overhauling the state’s electoral system is one of his top priorities.

On Monday, Mr. Abbott said the flight by Democratic House members from Texas “inflicts harm on the very Texans who elected them to serve” and called on the members to “get back to the job they were elected to do.”

If Democrats remain out of state and deny a quorum until the special session concludes at the end of the month, Mr. Abbott can simply call another one. He is certain to call at least one more session later this year to pass new congressional and legislative maps and allocate billions of dollars in federal pandemic relief funding.

Texas Democrats used their temporary victory in May to draw attention to their efforts to block new Republican voting laws and the debate in the U.S. Senate over whether to pass federal protections for voters. They traveled to Washington to lobby senators at the Capitol and met with Ms. Harris at the White House.

But efforts by congressional Democrats to pass a sweeping new voting law, the For the People Act, stalled last month when Republicans blocked it in the Senate.

The Texas Democrats’ escape follows several days of internal deliberations about how aggressively to resist the Republican proposals on voting. While a group of progressive young lawmakers advocated leaving the state, the party’s leadership had been more cautious, pushing a plan to force a series of votes on amendments aimed at watering down the voting bill.

Democratic reluctance to fleeing the state evaporated over the weekend as liberal activists, Texas citizens and Beto O’Rourke, the former congressman who is the state party’s most popular figure, testified at a hearing beginning Saturday morning that lasted nearly 24 hours.

By late Sunday afternoon there was sufficient momentum toward leaving that Democratic leaders who had privately warned against doing so came on board with the plan.

“We need them to act now because they will keep calling these special sessions to pass voter suppression legislation,’’ Chris Turner, the Democratic caucus chairman, said when the group arrived at Dulles. “So we need Congress to act now. The clock is ticking, they’ve got to act before the August recess.”