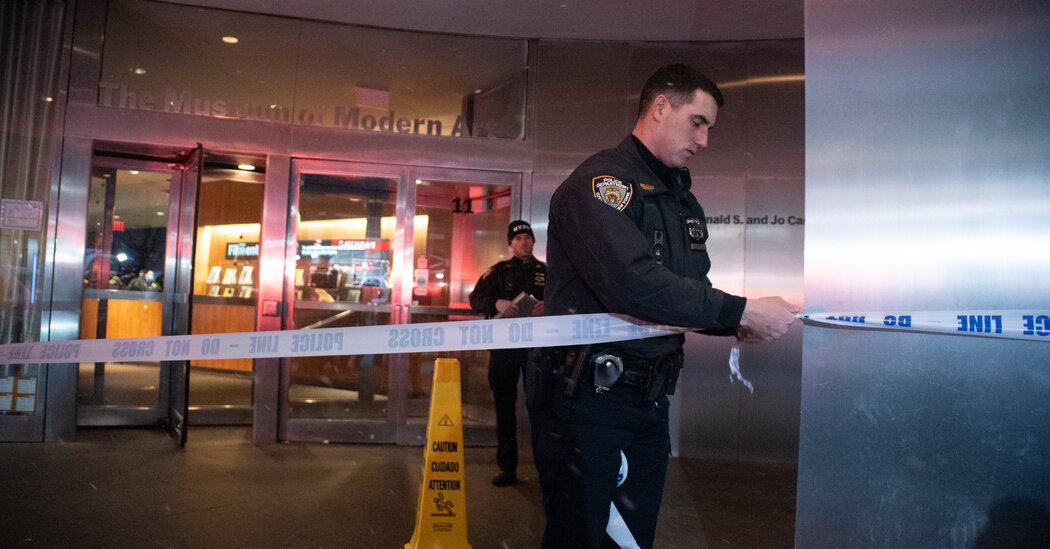 A suspect in the stabbing of two employees at the Museum of Modern Art in New York over the weekend was arrested early Tuesday in Philadelphia, the New York Police Department said.

The Police Department had identified the suspect in the stabbing on Saturday as Gary Cabana, 60, and released video that it said showed him attacking workers at the museum. Mr. Cabana had been denied entry to the museum after his membership was revoked.

“Gary Cabana: We’re no longer searching for him,” Detective Hubert Reyes of the New York Police Department said by telephone shortly after 3 a.m. on Tuesday. “He’s apparently been apprehended in Philadelphia.”

Detective Reyes said he had no further information about the arrest, including what charges Mr. Cabana had been apprehended on. The Philadelphia Police Department could not immediately be reached for comment early Tuesday.

The arrest was reported earlier by Steve Keeley, a journalist with a Fox News affiliate in Philadelphia. He said Mr. Cabana had been arrested outside a Greyhound bus station at 1:30 a.m.

A video released by the New York Police Department after the stabbing shows a man, whom the department identified as Mr. Cabana, barreling through a revolving door at the museum and climbing across a counter with a knife in his hand, cornering three employees behind a desk. As they cower under it, he begins jabbing and swinging the knife.

John Miller, the deputy commissioner for the New York Police Department’s Intelligence and Counterterrorism Bureaus, later told reporters that Mr. Cabana was a regular at MoMA but that his membership had “expired as a result of two incidents involving disorderly conduct here at the museum on two separate dates in recent days.”

He did not have “an extensive record or any arrest records that we are aware of,” Mr. Miller said.

On Sunday, Mr. Cabana appeared to post his version of what had occurred at the museum on social media, writing at one point that he had been “triggered” by a woman who tried to silence him when he laughed during a film.

The New York Police Department later said it was aware of those posts and was investigating them.

Mr. Cabana’s last-known address was a supportive housing residence in Midtown Manhattan that offers shelter for the homeless, the mentally ill and those diagnosed with H.I.V./AIDS, the police said.