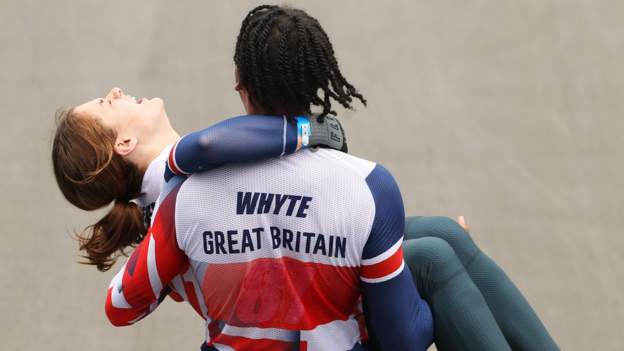 Britain’s Bethany Shriever won gold in the women’s BMX racing final, moments after team-mate Kye Whyte claimed the nation’s first Olympic medal in the event with silver in the men’s.

Shriever, 22, was lifted into the air by Whyte as the pair celebrated their historic achievements in Tokyo.

After needing crowdfunding to be able to go to Japan, Shriever held off two-time champion Mariana Pajon to win.

In the men’s, Whyte was 0.114 seconds behind Dutch rider Niek Kimmann.

The pair retained their focus and composure after both finals were delayed by two serious crashes.

American rider Connor Fields, who was the favourite in the men’s race, was taken off the track on a stretcher and then to hospital after a horrible crash in the third and final heat of his semi-final, while Australia’s Saya Sakakibara also needed medical attention after crashing.

‘I was almost crying at Kye’s silver’

“Honestly, I’m in shock. To even be here is an achievement in itself,” said Shriever, who won all three of her semi-final races to qualify for the final.

“To make a final is another achievement in itself. To win a medal, let alone a gold medal, I’m over the moon.

“Winning a medal wasn’t my goal – results are out of our control. To keep to my routine and keep cool around the track, I managed to hold and earn the win. It is crazy.”

Whyte, 22, has fought back from serious injury to earn his place on the Olympic podium.

Dubbed the Prince of Peckham, the Londoner looked stunned as he celebrated with his family back home on a video screen at trackside.

After UK Sport withdrew funding for British women in the run-up to Tokyo, Shriever also saved money from her part-time job as a teaching assistant.

Both Shriever and Whyte were making their Olympic debuts in the Japanese capital, with Shriever saying she took extra inspiration from seeing her team-mate’s success moments earlier.

There were jubilant scenes as the pair celebrated their success together, Shriever then dropping to the track in exhaustion.

“I was watching him as I was going up. I was almost crying because he got a silver. I had to keep[ my cool and reset and just dig in. I gave it everything,” said Shriver, who won all three of her semi-final races.

“I had nothing left, the lactic acid was crazy. I gave it absolutely everything I had.”

Former British BMX rider Shanaze Reade, who finished sixth in the London 2012 final, said the pair had put in the “performances of their lives”.

“I always say a happy head is fast legs – both of those guys seemed so happy, so relaxed and took it in all stride. Their performances showed that.”

Even though Shriever’s success came at 04:45 BST, it did not stop former Oasis singer Liam Gallagher showing his new-found love for the BMX rider.