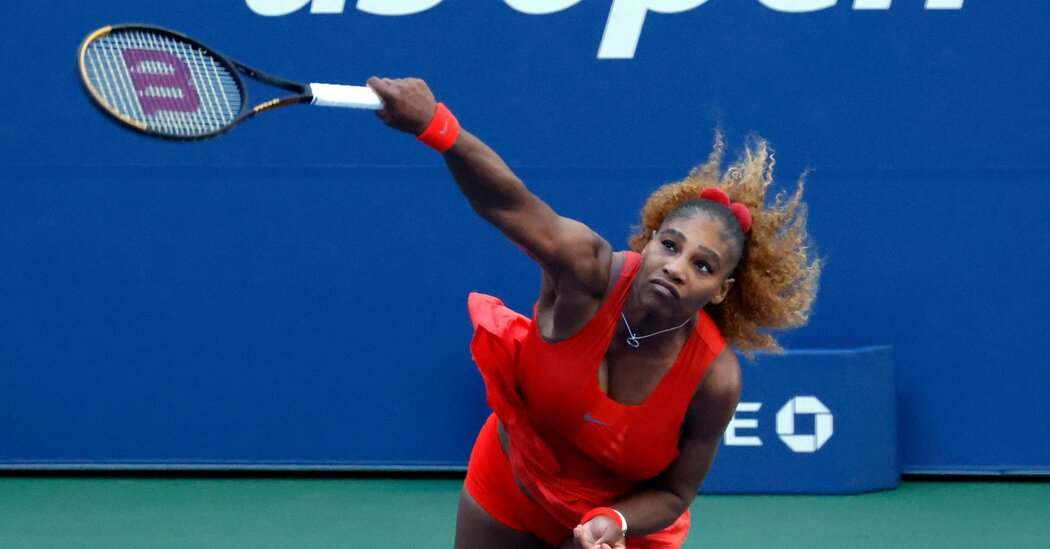 After a sluggish start, Serena Williams rallied to defeat Sloane Stephens in the third round of the United States Open on Saturday.

Williams, in pursuit of a record-equaling 24th Grand Slam singles title, struggled on her serve and groundstrokes in the early stages but found a higher gear to prevail 2-6, 6-2, 6-2.

It was a matchup of two former U.S. Open champions trying to get back into top form.

Stephens, 27, won this title in 2017 and reached the French Open final the following year but has struggled to build on those achievements.

She has been in a funk throughout this abbreviated season: winning just one of her nine singles matches in 2020 before playing in the U.S. Open.

Williams, 38, one of the game’s great champions, lost early at the Australian Open in January and has been inconsistent and occasionally overwrought since the tour resumed last month, losing to the 116th-ranked Shelby Rogers and to the 21st-ranked Maria Sakkari and routinely being pushed to three sets.

But Williams has worked her way back into a better place at this most unusual U.S. Open, which is being played without spectators because of the coronavirus pandemic.

Her serve remains a match-winning shot, and she hit 12 aces against Stephens. After being broken twice in the opening set and struggling with her first-serve percentage, she found her range and often dominated her service games in the final two sets.

Her victory was her sixth in seven matches against Stephens, and it earned her a rematch in the fourth round with Sakkari, the rising Greek star who, like many of the game’s leading players, was watching from the stands on Saturday as Williams and Stephens traded blows.

“It was intense,” Williams said. “I have to say we always have some really incredible matches, and it brings out the best in my fitness when I play Sloane. She’s definitely a great player, and she’s won on this court.”

Stephens’s 2017 U.S. Open title was a major surprise, coming as she returned from a foot injury, and it came with Williams off the tour after giving birth to her daughter Olympia.

Olympia was in the stands on Saturday after celebrating her third birthday earlier in the week. Sitting in her father Alexis Ohanian’s lap after the match, she exchanged waves with her mother.

“I forgot she was coming out, I hope she saw her mama fighting,” Williams said. “I don’t think she was paying attention. She may have been playing with some princesses upstairs.”

If so, Olympia missed Williams keeping her cool, cutting down her errors and winning 10 of the final 12 games as Stephens began missing returns and targets after being so sharp and consistent in the opening set.

She made just five unforced errors to Williams’s 13: absorbing her pace, dominating the extended rallies and finding patterns that often left Williams far from the ball amid the eerie quiet of an empty Arthur Ashe Stadium.

It is a U.S. Open like no other, and yet Williams is trying to follow a familiar template — lifting with each round and eventually lifting the trophy.

She has won six U.S. Open singles titles, but has not won a Grand Slam singles title since the 2017 Australian Open, when she was two months pregnant with Olympia.

Since her return in 2018, she has lost in four Grand Slam singles finals in straight sets, including the last two U.S. Open finals.

This tournament has a significantly weaker field than usual, with six of the top 10 missing, but familiar threats are still in contention.

Angelique Kerber, Naomi Osaka and Petra Kvitova — all multiple Grand Slam singles champions — have reached the fourth round in the top half of the draw.

But no one left in the tournament has won nearly as many majors as Williams. She is not as quick into and out of the corners as she was in her prime. She has struggled to close in 2020, but she did not waver in finishing off the 26th-seeded Stephens on Saturday.

That can only be reassuring as she moves forward in New York without the familiar roars from the Ashe Stadium stands but with a familiar feeling.

“I love a crowd, especially this crowd,” she said. “But I am so intense. This is how I am in practice, incredibly intense.”