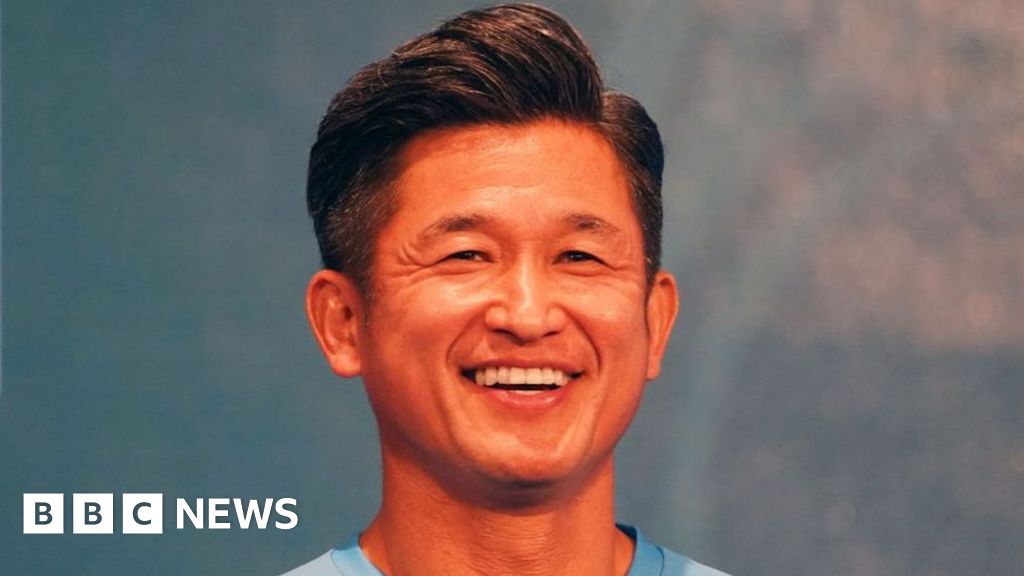 The second round of the Japanese League Cup is not normally international news. But when top-division side Yokohama FC played Sagan Tosu last month, it made headlines around the world. Why?

Because the Yokohama captain, Kazuyoshi Miura, was 53 years old.

Miura’s never-ending career fascinates football fans around the world. His contract extensions are reported by the BBC and CNN. He holds the Guinness record for “world’s oldest goalscorer”.

Even his inclusion in the FIFA 20 computer game – after first appearing in it 24 years ago – made headlines.

So who is “King Kazu” and why does he keep playing? What’s the secret to a football career that is at least 15 years longer than average?

Miura grew up in a football family in Shizuoka, where the game has long been popular. His older brother Yasutoshi also became a professional, and their father was an avid fan.

“My father was in Mexico in 1970 to watch the World Cup,” Miura says, speaking via a translator. “He filmed the matches by 8mm video camera. At that time, Pele was playing, and I grew up watching the video taken by my father.”

Miura was only three in 1970, but the home-made video, looping over and over, had a lasting impact.

“I became a fan of Brazilian football,” he says. “From the time I was a little boy, I wanted to live as a professional player.”

Miura’s father had links to Brazil and the teenager left school in Shizuoka aged 15 to move there.

He signed for Juventus, a professional team in Sao Paulo, but it was not an easy start. He lived in a dormitory with other youth players, aged 15 to 20, and spoke little Portuguese.

“I couldn’t understand the language, and the customs were different, so naturally I felt lonely,” Miura says. “The first three months was really hard.”

But he was determined to improve. He threw himself into training sessions. He learned Portuguese. He made friends. He had to succeed in Brazil because, really, there was no Plan B. When asked whether there was an alternative career, had football not worked out, he pauses.

“I don’t have any idea,” he says, eventually. “All I wanted was to be a football player. So this is the hardest question to answer.”

In 1986, three years after moving to Brazil, Miura signed for Santos, where Pele – star of those 8mm videos – played most of his career. He stayed in Brazil, at a number of clubs, for more than four years.

He returned to Japan in 1990, a bona fide superstar. In 1993, the J-League’s first season, Miura was named most valuable player – beating, among others, England’s Gary Lineker.

In 1994, he moved on loan to Genoa in Italy, becoming the first Japanese player in Serie A. He needed surgery after his first game – he hit the back of Italian legend Franco Baresi’s head – scored only one goal, and stayed only one season. But his spell in Italy only increased his status back home.

“He is intrinsically tied up with the birth and development of professional football in Japan… he has achieved a god-like status, in some ways I guess similar to Maradona in Argentina,” Carroll says.

“There is a whole generation of professional players, maybe even two generations now, who cite him as their role model when they were kids.”

But why is he still playing?

In 2005 – aged 38 – Miura signed for his current club, Yokohama FC, in the Japanese second division. He became a key player, playing 39 times as the team won promotion to the top division in 2006.

Although they were relegated after one season, Miura remained a regular for Yokohama in the second tier well into his 40s. In 2016, he played 20 times, scoring twice.

Miura rarely gets injured (except when running into Franco Baresi) and is renowned for his fitness regime. He speaks to the BBC after training, in a dressing gown, holding an ice pack to his leg.

“For sure, it takes me longer than the younger players to recover,” he says. “But even though it’s very hard, I have this passion of wanting to play, so that keeps me going.”

And, as well as his fitness, there’s another reason for Miura’s ultra-long career – his popularity.

In 1998, just before Japan’s first World Cup, Miura was dropped from the squad, adding a layer of sympathy to his superstar status. But more importantly, he is known for simply being a nice person.

The editor of J Soccer magazine, Alan Gibson, first met Miura in 1993, and went on to referee him a number of times in friendly games when he played for Vissel Kobe in the early 2000s.

“He was a gentleman on the field – I really enjoyed refereeing him,” says Gibson.

“Everyone loves him. Although he’s ‘the King’, he didn’t make the World Cup. And, as he played for Yokohama for so long, he hasn’t recently won a championship with a team everyone hates.”

That popularity makes more people watch Yokohama games – “If they know he’s playing, an extra 3,000 or 4,000 people turn up,” says Gibson – and encourages a number of sponsors.

That links to a final reason for Miura’s longevity: the respectful – or perhaps sentimental – streak than runs through Japanese society.

One coach, while praising Miura, tells the BBC that “King Kazu” has become a “panda bear” at Yokohama – that is, a rare, much-loved curiosity, rather than a serious player. Despite playing twice in the League Cup, he has not played in the league this season, and only played three times last year.

Sean Carroll says Miura’s experience is important in the Yokohama dressing room, but agrees that his ultra-long career says something about Japanese society more widely.

“Hierarchy is incredibly important in Japan anyway, but when you’ve contributed as much as Kazu, he pretty much has a contract as long as he wants one,” he says.

“The idea of him ‘working hard’ and ‘acting as an inspiration’ is oft-repeated by fans and the media – fulfilling a kind of ‘anything-is-possible’ fairy tale. Which again, reflects Japanese culture at large.”

Even that, though, doesn’t quite explain Miura’s longevity. After all, it’s not the supporters, or the sponsors, who push through the pain barrier, day in, day out, aged 53.

Miura is often asked what the “secret” is to his career. He insists there is no secret – other than hard work and dedication. But perhaps the secret comes in the answer to the final question.

Does 53-year-old Kazu, training every day in Yokohama, enjoy kicking a ball as much as the 15-year-old boy who flew to Brazil with a few words of Portuguese and head full of dreams?

“Yes, I still enjoy playing football – every moment,” he says. “Really, I enjoy it even more than when I was in Brazil.”