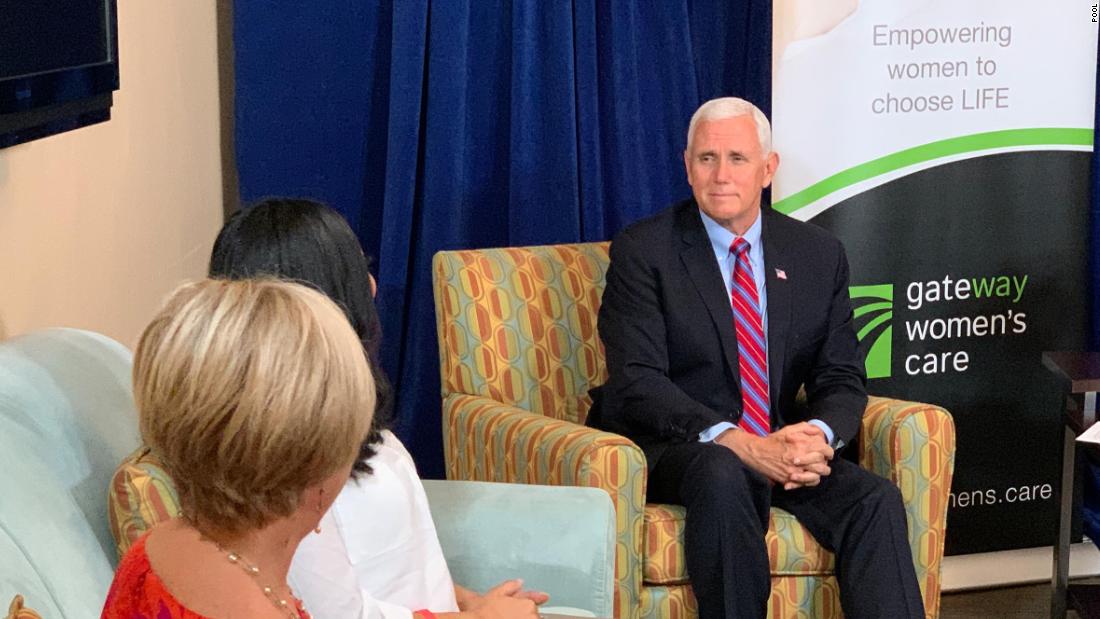 Next week, Pence is headed to Pennsylvania where he’ll meet with “pro-life advocates” and participate in what his office is calling a “fireside chat highlighting President Trump’s record as the most Pro-Life president ever.”

His efforts come as recent polling shows a tight race for president in both states, which Trump narrowly carried in 2016. Abortion could be a pivotal issue in tight swing states. According to a Gallup poll conducted in May, one in four respondents said they will only vote for a candidate who holds their same views on the issue, which Gallup noted, is higher than most other years.
Pence’s message on Thursday in North Carolina, first at a church and then at a pregnancy and sexual health center that opposes abortion rights, was consistent: Trump is the reliable choice for those opposed to abortion.

“Life is winning in America today,” Pence said, participating in a roundtable where women shared their experiences about why they visited the center and the decisions they made with their pregnancies. He thanked Trump for defending the anti-abortion movement, as well as younger Americans who he said are leading it.

“Joe Biden supports taxpayer funded abortion all the way up to birth,” Pence said, reprising a claim from the Republican National Convention.

Biden backs repealing the Hyde Amendment, which currently bars federal funds from going toward abortions except in cases of rape, incest or when the mother’s life is at risk — a dramatic shift he made last year from his long-held support for the provision.

A Biden campaign official said that Biden supports Roe v. Wade — the landmark 1973 Supreme Court ruling that legalized abortion nationwide, as amended by Planned Parenthood v. Casey. That 1992 Supreme Court case introduced the “undue burden” standard to determine if a state law imposes a “substantial obstacle in the path of a woman seeking an abortion before the fetus attains viability.”

“By repeating a false and twisted narrative about abortion, Mike Pence is once again spreading misinformation in an effort to further stigmatize the right to choose,” Biden campaign spokesperson Rosemary Boeglin told CNN in a statement. “It’s grossly irresponsible, wholly unreflective of this medical procedure, and he should be ashamed of himself.”

Pence was met with dozens of protesters during his first stop Thursday at the Gateway Women’s Care pregnancy and sexual health center, many wearing masks and holding signs with slogans including, “Trump = Tyrant, Pence = Puppet,” “I vote pro-choice,” “I’m a woman not a womb,” and “Keep abortion safe and legal.”

Pence’s appearance at the clinic and the church was part of a book tour for Marjorie Dannenfelser, the president of the anti-abortion group Susan B. Anthony List and national co-chair of the Trump Campaign’s Pro-life Voices for Trump coalition. Pence, who wrote an introduction to her new book, participated in another such event with Dannenfelser in Tampa last month, and is slated to appear at another in Pennsylvania next week.
On Thursday, the group unveiled a six-figure newspaper ad buy in Pennsylvania to run before Pence’s visit, and the group’s super PAC, Women Speak Out PAC, announced a North Carolina ad buy last month as part of a $52 million 2020 budget for battleground states.
Recent polling from Monmouth University showed Biden at 47% to Trump’s 45% among registered voters in North Carolina. And in Pennsylvania, Biden was at 49% to Trump’s 45% — resulting in no clear leader in either state given the polls’ 4.9 percentage point margin of sampling error.
Pence appeared at the North Carolina church after GOP Sen. Thom Tillis, who’s facing a tough reelection. The same Monmouth poll of the Tar Heel State found no clear leader for Senate, with Democratic challenger Cal Cunningham at 46% and Tillis at 45%.
Pence made a clear appeal to the Republican base by touting the President’s appointment of over 200 judges. In the aftermath of the recent 5-4 Supreme Court decision to block a Louisiana abortion restriction, Pence said, “I think people in this movement could only draw one conclusion — we need more conservatives on the Supreme Court of the United States, we need four more years of President Donald Trump.”

“It says all you need to know about the priorities of the Trump/Pence administration when the vice president comes to our state not to talk about tackling the COVID-19 pandemic or systemic racism, but to … spread more lies about abortion and reproductive health care,” Sarah Riddle, a spokesperson for Planned Parenthood Votes in North Carolina, said in a statement.

NARAL Pro-Choice America President Ilyse Hogue accused Pence and Tillis of “sending a simple message to North Carolinians and Americans across the country: that their extremist ideology takes precedence over science, medical expertise, and people’s health and safety.”