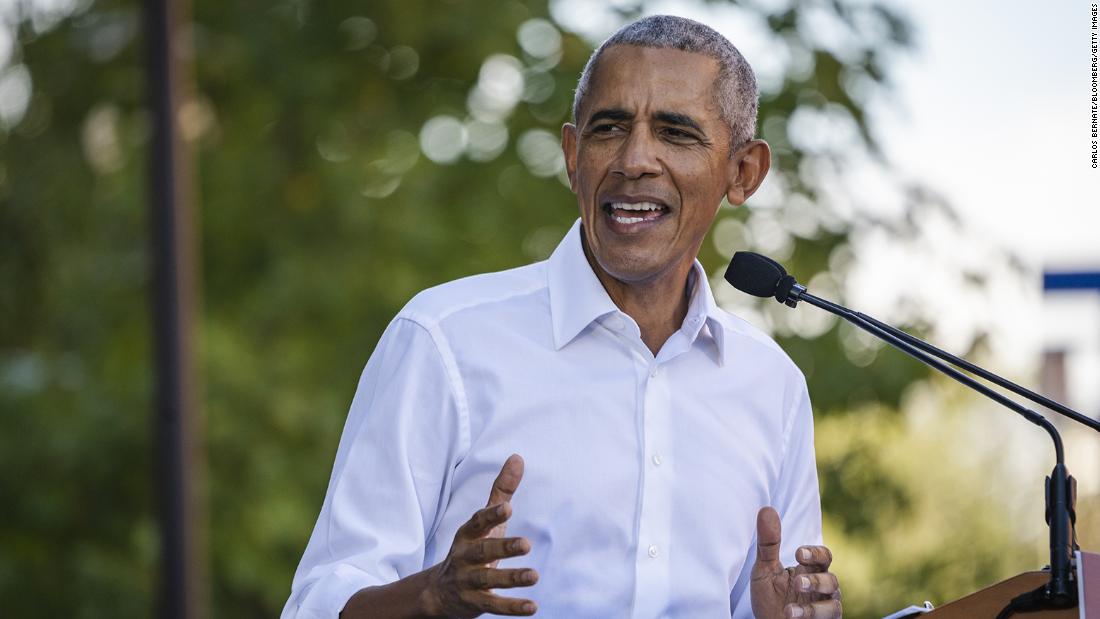 At least when it comes to fighting climate change. And at least when you judge the country as a whole and not just what’s going on in Washington, where the President’s climate agenda just took a major cut in Congress.

It’s an extremely unusual appearance by a former president at a world leaders event, but Obama aides and friends tell CNN the former President wants to help Biden win back world faith in American leadership on this issue, and get the global alliance back on track after four years of Trump.

Obama “has a global following,” said John Podesta, who worked on climate issues in the Obama White House and remains in touch with the former President. “Poll after poll show young people in particular are despairing of whether democracy can work, whether politicians are up to the task. They see Obama as inspirational and who tells it like it is.”

Obama’s presence at the COP26 began with suggestions from climate activists. But it really took shape in conversation with John Kerry, his former secretary of state and Biden’s special presidential envoy for climate, people familiar with the conversations tell CNN.

The White House was eager for the help, officials said, requesting anonymity to discuss the behind-the-scenes conversations.

Still, Obama’s trip does not just reflect an acknowledgment in the Biden White House and beyond of how much international faith in America declined during the Trump years. It also reflects an awareness of how much more Obama connects with people globally, even now as a former President, than Biden does as the president actually in the Oval Office.

Even when Obama was at his most popular in America, he was always much more popular overseas, with his election seeming symbolic of the world’s superpower embracing internationalism and a new, forward-looking generation. Obama remains the inspiring figure around the globe, particularly with the younger people to which he will dedicate much of his time while in Scotland. In coordination with his own foundation and Columbia University’s Climate School, he will host a roundtable with youth activists (including many who are alumni of his global fellowship programs) and urge business leaders to accelerate their own clean energy investments.

A State Department official called Obama “among our strongest global advocates for action,” adding that he’ll be “a welcome voice,” in describing the rare tag-team approach for two Presidents.

‘Can you walk the talk?’

Plenty of people think it could work. But after Trump, they have their doubts.

“Obama was one of the Paris Agreement’s architects and President Biden has confirmed the United States is fully committed to the climate action,” said Carolina Schmidt, Chile’s minister of the environment and the president of the last Conference of Parties (COP) meeting, held in 2019 at a time of intense international panic about Trump policy guided by his conspiracy mongering that climate change is a Chinese hoax. Trump announced in 2017 he was pulling out of the Paris Accords, which was built around country-by-country commitments to cutting carbon emissions through government action. Biden reentered the agreement in one of his first moves in office.

But, Schimdt added, “We need not only leaders, but concrete commitments by every country — but especially from the big emitters — following the signs to be carbon neutral by 2050 at the latest. In that sense, all the commitments of the United States in helping to reach these global agreements is good news.”

After asking to speak anonymously, a European Union diplomat was more direct about how Biden’s difficulties getting his agenda through Congress have been perceived, even with the current and former President coming to Scotland.

“It’s great to see the US back on the frontlines of the global climate fight. But what you manage to do domestically is just as important as what you bring to the table internationally,” the diplomat said. “So the international pressure is great and without all these additional diplomatic efforts, we’d certainly be in a worse place, but there is a lingering question: Can you walk the talk?”

Biden sees combating climate change as an existential issue and top priority for his presidency, and aides argue he’s picking up on the direction Obama set but trying to turn it into reality. That goes for much of what’s in the infrastructure bill, but also an array of executive actions and regulations that the White House is moving ahead with on its own authority.

Biden was picked as the running mate in 2008 in part to shore up Obama’s lack of foreign affairs experience and credibility at the time. Now, the roles are reversed, and Obama will be the one shoring Biden up. Careful not to overshadow Biden, though, Obama won’t arrive at COP until November 8, a week after Biden’s own appearance at the event, starting this Monday. That timing was carefully sequenced: Obama will give a formal speech to the assembled diplomats, but it will be after most of the world leaders leave.

Podesta helped lead Obama White House efforts for the Paris Climate Accords in 2015 and was one of the climate activists who urged the former President to head to this year’s COP to help make the case. He said there are critical messages that Obama is uniquely positioned to deliver about America’s reasserting itself after Trump, but also about how local efforts to combat climate change continued in the US even while Trump pulled out of the international agreement.

“Even with someone who was furiously trying to go in the opposite direction, the United States stayed the course because people of good will in local office and in governor’s mansions around the country stepped up, and they kept us on track,” Podesta said. “That’s a different story than, ‘Oh you can’t trust the United States because they elected Trump.’ You hear that a lot. And this is the other way of thinking about it.”

As Obama heads to Scotland, his foundation is pumping out materials about his own work getting the international climate conversation to this point. That includes a video he narrates, picking up with his appearance at the COP15 conference in Copenhagen during the first year of his presidency, at which an international climate agreement fell short of happening, and follows the diplomatic works he led over the rest of his presidency, which culminated in the Paris Accords. Making an argument he’ll pick up in Scotland, he says in the video, “Paris gives us the vehicle through which to bring about the changes that are necessary but what’s still required is the will and the activism of citizens pushing their governments to be ambitious.”

There’s also an oral history of the climate work that concludes with Obama and some of the aides most involved in the Paris negotiations addressing “The Work That Remains.”

“A testimony to, I think, its resilience was the fact that my successor in the White House decided unilaterally to pull out of the Paris Accords—and yet, despite what could have been a huge symbolic blow that collapsed the entire agreement, every other country in the world stuck with it,” Obama says in that history. “So although we were on the sidelines, all the other major countries said, no, we’re going to keep on going. And now we’ve got a US government that once again is prepared to take leadership in this process.”

“He knows he’s passing the baton,” said Podesta, who’s also part of that oral history, “but he knows he has an important role.”