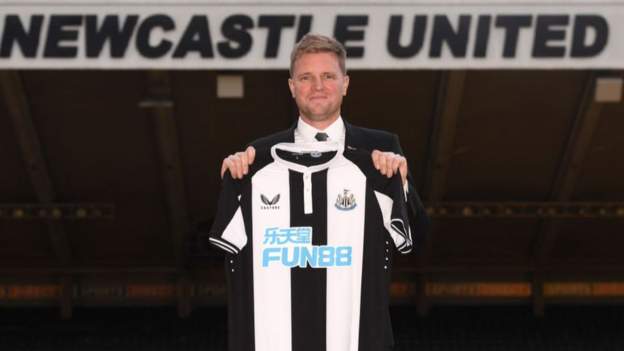 Newcastle boss Eddie Howe says the club are a “perfect fit” for him after taking over on Monday.

Howe, who has signed a contract until the summer of 2024, has not been in management since he left Bournemouth in August 2020 following relegation.

Newcastle are 19th in the table and five points from safety after 11 games but Howe is confident he can turn that around if players buy into his ideas.

“The pull of the club is huge, the size and the history of the club and obviously the new ambitious plans. I just thought it was the perfect fit for me.”

The “ambitious plans” Howe refers to follow the £305m Saudi Arabian-backed takeover by the Public Investment Fund, and the 43-year-old was asked about his new employer’s human rights background.

“For me this was a football decision. I’m absolutely delighted to be manager of Newcastle,” he said. “I’ll repeat myself, it is about football and that is all I’ll concern myself with.”

Howe says he is “honoured and privileged” to take the job and has also vowed to play “brave, attacking football” with his new side.

“The game is always about how much you commit one way or the other,” he said.

“If you watched, my Bournemouth teams always tried to play on the front foot and play brave, attacking football. I am not going to come here and do something I haven’t done before.

“I think over time you will see positive changes in our football. I want to play football that entertains and excites and I think that is the type of football Newcastle fans want to see.”

The new boss also says he understands how much pressure he will be under trying to save Newcastle from relegation, adding that in his first spell as manager at Bournemouth “the existence of the club was under threat if we failed”.

“There is no magic wand. It will take a lot of hard work to instil what we want in the players quickly. Their application so far has been hugely impressive. We will need that to be consistent.”

Howe confirmed his backroom staff will be Jason Tindall, Stephen Purches, Simon Weatherstone and Dan Hodges, while Graeme Jones will also remain part of the team.

He says their focus at first will be “very short term” and that planning needs to take place for the January transfer window, as well as “improving infrastructure and working with the academy and young players”.

“There are long-term views to what we do, but I know with this job currently I’d be foolish to take my eye off what is immediately in front of me,” Howe said.