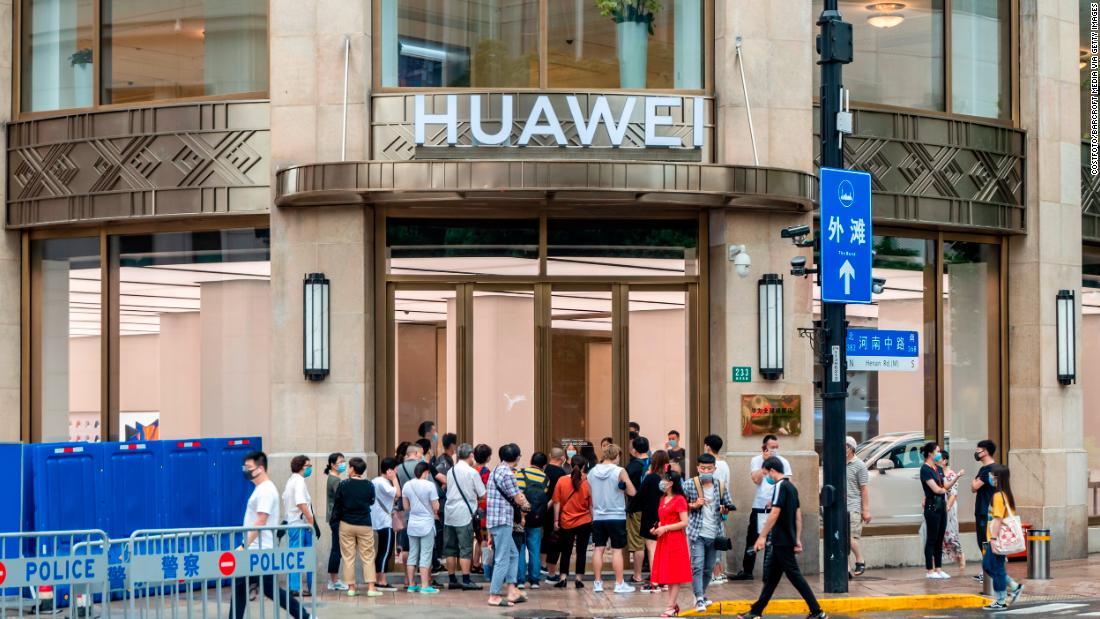 The US Commerce Department on Monday announced fresh sanctions that restrict any foreign semiconductor company from selling chips developed or produced using US software or technology to Huawei, without first obtaining a license to do so.
Restrictions announced in May had already limited companies such as Taiwan Semiconductor Manufacturing Company (TSM) from making and supplying Huawei with chips designed by HiSilicon, a subsidiary of the Chinese company. Monday’s measures effectively extend that ban to all chip designers, such as Taiwan’s MediaTek, whose shares plunged nearly 10% Tuesday.

Washington has long alleged, without providing proof, that Huawei products threaten national security because they could be used to spy on Americans. Huawei, who did not respond to a request for comment in time for publication, has repeatedly denied that its gear and products pose a national security risk.

Paul Triolo, head of geotechnology at Eurasia Group called the latest US restriction “a lethal blow to China’s most important technology company.”

It is “potentially [the] most serious effort by the US government to choke off the company’s ability to obtain advanced semiconductors for all of its business lines,” Triolo wrote in a note on Monday.

Huawei relies on foreign-made semiconductors to power its 5G telecommunications gear. British officials cited the uncertainty to the company’s supply chain as a key reason for banning Huawei from the United Kingdom’s 5G network last month.

The new US sanctions could also be the final nail in the coffin for Huawei’s mobile phone business.

Huawei’s hope that it could rely on third-party chip designers to continue making smartphones “has been dashed,” Edison Lee, an analyst with brokerage firm Jefferies, wrote in a note on Monday.

Fallout for US firms

US companies will also suffer.

Chip sales to China “drive semiconductor research and innovation here in the [United States], which is critical to America’s economic strength and national security,” Neuffer added in a statement.

Qualcomm (QCOM) had reportedly been lobbying the US government to grant it a license to sell chips to Huawei, arguing that Huawei generates billions of dollars in sales for Qualcomm and helps the US firm fund development of new technologies, according to The Wall Street Journal.
Micron (MICR), another US chipmaker, had obtained a license to supply some memory chips for Huawei’s smartphones, after the company was barred from buying US tech and parts last year.

But David Zinsner, Micron’s senior vice president and chief financial officer, warned in an earnings call in June that the company was “seeing an impact from the recent restrictions imposed on Huawei.”

Other US tech companies could also become collateral damage in Washington’s campaign against Huawei, according to Triolo, of Eurasia Group.

The United States’ latest move against Huawei and recent threats against other Chinese tech firms means “a punitive move from Beijing against a leading US tech firm is highly likely,” he said.

Beijing on Tuesday pushed back against Washington’s restrictions.

“China firmly opposes the deliberate smear and suppression of Huawei and other Chinese companies by the United States,” Zhao Lijian, a spokesperson for China’s Foreign Ministry, told reporters.

The United States “has generalized the concept of national security, abused national power, imposed various restrictive measures on Chinese companies such as Huawei, and bully without providing any evidence,” Zhao added.

Meanwhile, Huawei rival Apple (AAPL) could be hurt by the Trump administration’s potential restrictions on WeChat.

Apple’s business in China is at risk, according to Lee of Jefferies.

It remains unclear whether iPhones in China will be allowed to install WeChat or WeiXin (the Chinese version of the app) given “Trump’s recent announcement to ban US companies from doing business with WeChat,” Lee said.

That would make Apple devices a lot less attractive in China, where WeiXin is known as a so-called super app, and is used to hail rides, message friends and family, pay electricity bills, order food delivery and much more.