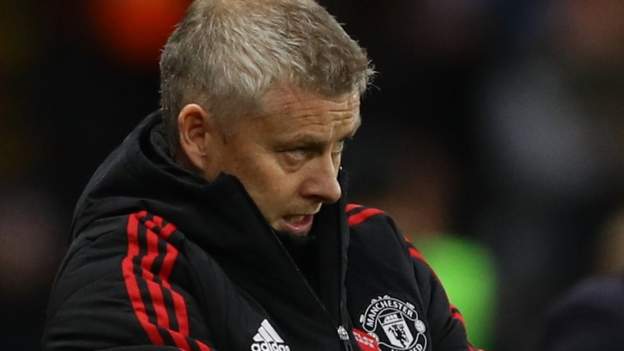 In an electrifying first half, United were unable to deal with the high pressing of a well organised Hornets side and quickly found themselves in danger when Scott McTominay bundled forward Joshua King inside the box.

But United goalkeeper David de Gea came to the rescue as the Spaniard saved not one, but two Ismaila Sarr penalties. Each of the Senegal winger’s efforts were tame but Kiko Femenia managed to turn in the rebound from the first spot-kick, only for the goal to be ruled out because of player encroachment from both teams.

It was not long, however, before Sarr rectified his penalty misses by sending a right-footed shot across De Gea’s goal to double Watford’s lead after King had opened the scoring thanks to Emmanuel Dennis’ assist.

But the nightmare continued for Solskjaer as Harry Maguire was booked twice in seven minutes and sent off.

A slither of hope looked to have arrived on 77 minutes when the lively Van de Beek found Ronaldo with a through-ball but the Portugal captain’s goal was ruled out for offside.

In the dying moments of the game, to the delight of the loud Watford faithful, Joao Pedro and Dennis added a third and fourth for Watford to pile more heartbreak on the travelling United supporters.

The defeat means United have tumbled down the table to seventh on 17 points, while Claudio Ranieri’s side are only four points behind them in 16th.

Can Solskjaer survive this latest setback?

In the hours before Manchester United kicked off at Vicarage Road, Cristiano Ronaldo posted on Instagram: “Time to roll up the sleeves once again and just get the job done! Let’s chase what we are trying to achieve this season!”

It remains to be seen exactly what the 13-time Premier League champions full objectives are this campaign, but a defeat against Ranieri’s Watford will only add more fuel to the pressure pit Solskjaer finds himself in.

After Manchester City cruised to victory at Old Trafford a fortnight ago, the Norwegian said his team had “worked on a few things” this week in order to stop the rot and fall further adrift of the title front-runners.

Unfortunately, Ranieri’s tactics managed to dismantle the “few things” Solskjaer would have been banking on to deliver his team a much-needed three points.

The dismal display was summed up by the contrasting performances of Bruno Fernandes and Van de Beek.

Fernandes, so often the main attraction for United, saw his wretched pass contribute to Watford being awarded a penalty in the first half. By the second 45 minutes, the Portugal international watched a shot balloon miles over the crossbar when on any other day, it might have been the creative masterstroke that saved Solskjaer’s skin.

Van de Beek, on the other hand, was once again relegated to the bench; not even given a place in the starting XI in order to give McTominay – who was reportedly suffering with a sore throat – chance to recover.

Yet the Dutchman was a bright spark and looked to have thrown his manager a lifeline when his header found its way past Hornets keeper Ben Foster. Whether Van de Beek’s second-half stint is enough for Solskjaer to keep faith in him for the Champions League group game with Villarreal on Tuesday is a hard question to answer.

In terms of the Premier League, United now have only one win in seven games, and four points from a possible 21. Will Ole still be at the wheel?

While all the headlines will be aimed towards how long Solskjaer has left at Old Trafford, nothing should be taken away from Watford.

In times gone by, failing to convert two spot-kicks against United would have been heavily punished but as the raucous crowd sang “you’re getting sacked in the morning” towards the opposition dugout, the Hornets fans were confident a home win was a done deal.

Life at Vicarage Road has been anything but dull for Ranieri since the Italian took over in October. In the five league games the well-travelled boss has been in charge, Watford have scored nine goals and conceded 10.