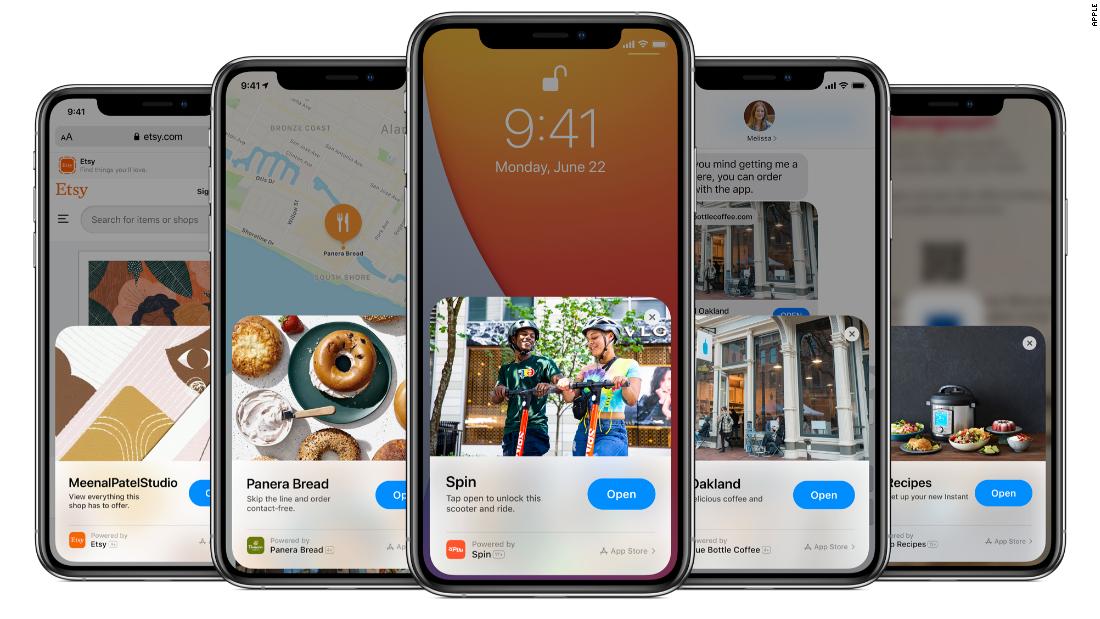 Instead of downloading an app, you can pull up just one part of it, saving valuable space on your phone. In China, that has long been the norm.

Last month, the iPhone maker debuted “App Clips” as part of its latest operating system update. The new iOS 14, which has already rolled out on many current Apple devices, will almost certainly be featured on a slate of new phones the company is revealing Tuesday.

The feature lets people launch just part of an app to complete quick, on-the-go tasks, such as ordering takeout from a restaurant or renting a bike. That means instead of downloading an entirely new app, users can launch a snippet by scanning a QR code, or by tapping a link shared via text or the Safari web browser.

For some, the concept may sound familiar: In China, the ubiquitous app WeChat has offered something similar for years.

WeChat, which is run by Chinese internet giant Tencent (TCEHY), is often referred to as a “super-app,” acting as a one-stop shop that does it all for users. People often joke that it more closely resembles an operating system than it does a traditional app because of how much time people spend on it. In recent years, WeChat has increasingly built its success on an ecosystem of lite apps, which are known as “mini programs.”

More than 400 million users rely on WeChat’s one million mini programs daily to do virtually everything, from ordering groceries to booking a yoga class to paying bills, without leaving the app. Like App Clips, mini programs don’t take up a lot of space, so they can load quickly and minimize the storage needed on a phone. Each program takes up 10 megabytes or less, while a full-sized app typically takes up dozens or even hundreds of megabytes.

“I think everyone can see the similarities [between the Apple and WeChat systems],” said Xiaofeng Wang, a senior analyst at research firm Forrester. “In terms of consumer-facing digital innovations, China is definitely ahead.”

Apple and Tencent declined to comment for this story.

How the trend started

Some thought the launch was intended to send a message about how the Chinese company wanted to own the future of mobile technology, according to Thibault Genaitay, a former software developer who now heads China operations at Le Wagon, a coding bootcamp.

“Ten years after the launch of iPhone, WeChat Mini Programs officially launches. And what a change to the idea of ‘downloading’ apps,” Connie Chan, a general partner at venture capital firm Andreessen Horowitz, wrote on Twitter at the time. “Mini programs could be revolutionary.”
Chan discussed the parallels between Apple and Tencent earlier this year, saying on a company podcast that “App Clips are very, very similar to the mini program ecosystem that WeChat launched.”

The two tech giants are not the only players to experiment with the idea.

Over the years, other companies have floated similar initiatives, such as Google’s (GOOGL) “Instant Apps,” Snapchat’s (SNAP) “Snap Minis,” and Button, a New York startup that connects users to specific pages within apps.

But Tencent was the first to make it mainstream, which led other Chinese platforms to follow suit, according to analysts.

The main problem these smaller programs address is that most users no longer want to install new apps, according to Dan Frommer, former editor-in-chief at Recode and founder of tech publication The New Consumer.

“We’re 12 years into the App Store, and most companies — especially the big companies — all have apps,” he said on the Andreessen Horowitz podcast in June. “But people don’t really download a lot of apps. You’d always hear that crazy stat that the average iPhone user downloads zero apps per month.”

Apple may be looking for a way around those problems. On its website for developers, Apple calls App Clips “an opportunity to quickly demonstrate the value of your app.”

“Users will be able to start and finish an experience from your app in seconds,” it says. “And when they’re done, you can offer the opportunity to download your full app from the App Store.”

Unlike with WeChat, Apple’s feature “basically lowers the boundary of downloading a mobile app,” said Wang, the Forrester analyst. “It’s like an entry ticket [to the App Store].”

This is not the first time that Silicon Valley has taken cues from China, said Pocket Sun, founding partner of SoGal Ventures, a venture capital firm that invests in startups in the United States and Asia.

Apple, for example, integrated its Apple Pay feature into iMessage well after WeChat popularized the use of digital payments on its messaging app, she said. And TikTok, the short-form video app owned by a Chinese company, has spurred several copycats from American businesses, such as YouTube and Instagram.
Even Facebook (FB) CEO Mark Zuckerberg has suggested that WeChat should be a case study for his company.
Last year, when The Information editor-in-chief Jessica Lessin posted an article on Facebook titled, “What Facebook Should Learn from WeChat,” Zuckerberg replied: “If only I’d listened to your advice four years ago …”

George Yip, an emeritus professor of marketing and strategy at Imperial College and visiting professor at Northeastern University, predicts that the West is just at “the tip of the iceberg” when it comes to emulating ideas from China.

He said that while some trends have clearly transferred over — dockless bike-sharing first took off in China before spreading overseas — “the surprise is how the West hasn’t woken up to this so much.”

“There’s still a lot of ignorance and resistance,” said Yip, who co-authored the book, “China’s Next Strategic Advantage: From Imitation to Innovation.”

David Chao, co-founder and general partner of DCM, a Silicon Valley venture capital firm with $4 billion under management, described the constant iterations as a giant game of “catch.”

One could argue, for example, over who truly started the short video format — TikTok or the American video platform Vine, he said. He noted that while Vine was the first app of its kind to gain ground, TikTok and its predecessor, the Chinese app Musical.ly, were clearly the ones to take the concept to another level and become a global sensation. (Chao’s firm was an investor in Musical.ly before it was acquired by ByteDance.)

“There is this catch ball going on. It’s not about one side copying another,” said Chao. “It just keeps going back and forth, back and forth. To me, that’s the most important part about the interesting innovations that go on.”