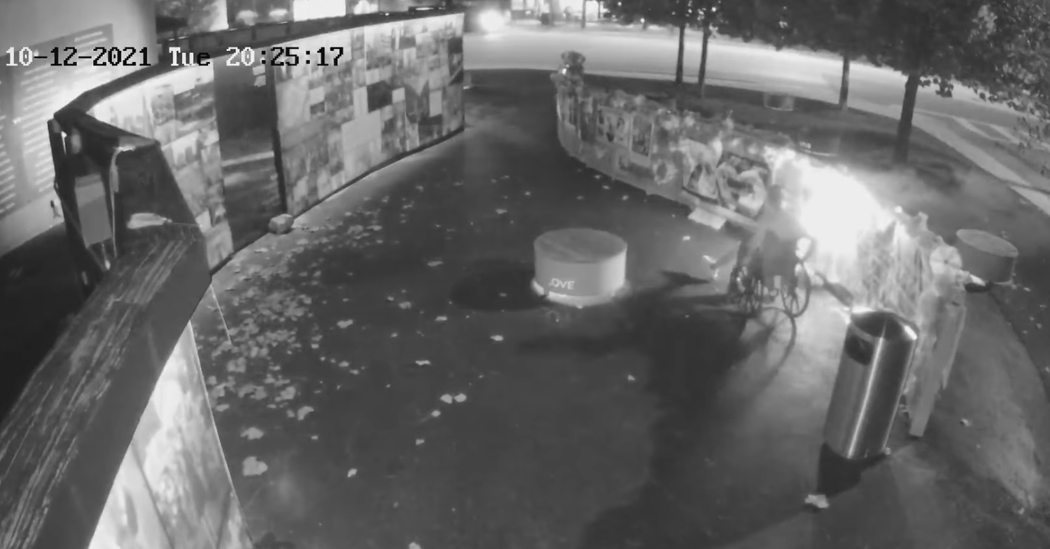 A man was arrested in connection with a fire that destroyed part of the Pulse Interim Memorial in Orlando, Fla., which honors the 49 victims of one of the deadliest mass shootings in U.S. history.

The man, Mark Henson, 64, of Orlando, was charged on Tuesday with felony criminal mischief, the Orlando Fire Department said in a statement.

No one was injured in the fire, which was captured on surveillance video. The Fire Department said that the video, along with witness statements, led investigators to make the arrest.

It was not immediately clear whether Mr. Henson had a lawyer.

On Saturday, the onePULSE Foundation, the nonprofit group that created the memorial to honor those killed five years ago at Pulse, a gay nightclub, released a video on Facebook showing a man setting fire to the site.

The video showed that just before 8:30 p.m. on Oct. 12, a man, whom the authorities later identified as Mr. Henson, pulled up to the memorial in a wheelchair and set fire to the materials on “the offering wall,” which features mementos and flowers.

Within seconds, the materials erupted in flames, the video showed.

As the blaze spread, the man then moved away from the memorial and headed down a street, away from the surveillance camera. After more than 15 minutes, the fire burned itself out.

Because the memorial sustained more than $1,000 in damage, “it is considered a felony,” said Ashley Papagni, a spokeswoman for the Fire Department.

The foundation said on Tuesday: “We are grateful to the Orlando Fire Department for today’s arrest. As always, we are so appreciative of all of the first responders who work to keep our community safe.”

A Pulse survivor, Brandon Wolf, who regularly visits the memorial at night to honor his friends, said the damage was heartbreaking.

“It’s an important place — for me and others,” Mr. Wolf said on Wednesday.

He added, “I’m grateful to the community members and organizations who were able to find the man responsible for this act of vandalism and have once again embodied this city’s spirit of support and unity.”

In June, President Biden signed a bill that designated the site of the nightclub as a national memorial. The club was a popular destination for Orlando’s L.G.B.T.Q. community.

“Just over five years ago, the Pulse nightclub, a place of acceptance and joy, became a place of unspeakable pain and loss. And we’ll never fully recover, but we’ll remember,” Mr. Biden said at the signing. He described the law as “literally a monument to a loss that occurred there and an absolute determination that we’re going to deal with this every single solitary day.”

The legislation, called H.R. 49 and named for the number of people killed in the rampage, was part of an effort to transform the former site of the nightclub into a permanent memorial, with a planned reflecting pool encircling the Pulse building and a museum with vertical gardens, public plazas and a rooftop promenade.

At the interim memorial currently at the site, people can leave flowers at an “offering wall,” and view the former nightclub building.