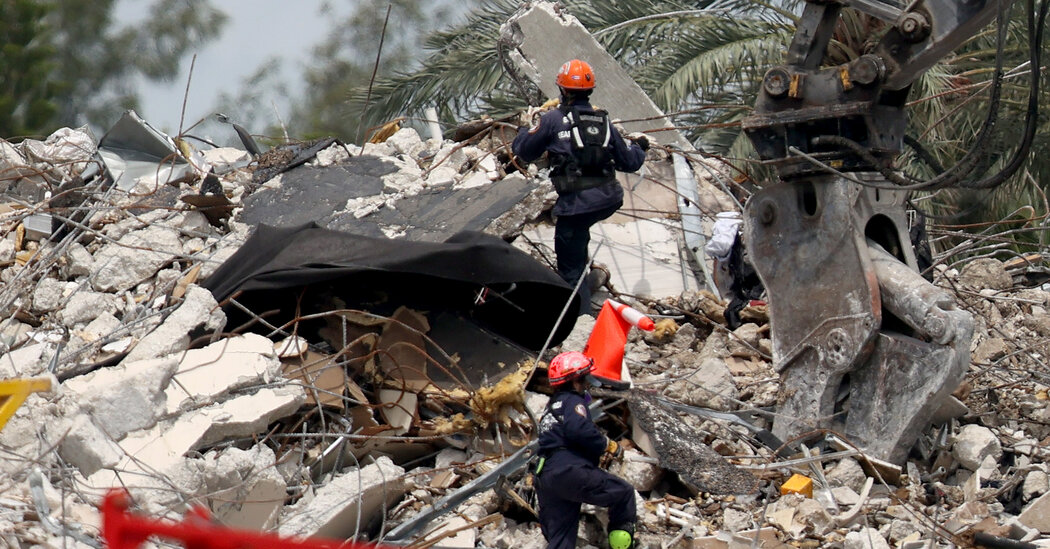 Three more bodies were found at the site of a collapsed condominium building in Surfside, Fla., on Monday, after rescue crews resumed their search following the demolition of the remainder of the building, officials said, bringing the death toll to 27.

The search effort had been halted for much of the weekend amid growing worries about the building’s stability, particularly with the approach of a tropical storm. The still-standing portion of Champlain Towers South was leveled in a controlled explosion at about 10:30 p.m. on Sunday, as anguished families continued to await news of the more than 100 people missing since the building collapsed 11 days ago.

At a news briefing Monday morning, Miami-Dade Mayor Daniella Levine Cava said the demolition was “executed exactly as planned” and left officials optimistic about safely sifting through the rubble.

“There is hope that there are voids that will allow us to continue the search and rescue operation,” said Ms. Levine Cava.

Rescue teams have begun searching through areas closest to where the remaining building structure had stood, which were not previously accessible. Search teams can now also use heavy equipment to remove debris.

Gov. Ron DeSantis said that concerns about the remaining part of the building left few options but demolition. Residents of the building who survived fled with whatever they had with them and had not been permitted to enter the teetering structure. Passports, wedding rings, cherished photos were left behind.

“At the end of the day, that building is too unsafe to let people go back in,” Mr. DeSantis said. “I know there’s a lot of people who were able to get out, fortunately, who have things there. We’re very sensitive to that. But I don’t think that there’s any way you could let someone go back up into that building given the shape that it’s in now.”

Mr. DeSantis said that while Surfside was not expected to see the worst of the approaching Tropical Storm Elsa, the town could still experience strong winds and heavy rain.

Mayor Daniella Levine Cava of Miami-Dade County said again Monday morning that the rescue operation “took every option we absolutely could to search for pets,” with multiple sweeps of the building, including searches under beds and in closets.

As Tropical Storm Elsa approached Florida, officials said they hoped the brunt of the storm would spare Surfside, the site of the building collapse. They cautioned residents closer to the storm’s predicted path, west of the Miami area, to prepare for heavy rain and possible power outages.

Elsa was expected to pass near the Florida Keys early Tuesday and then move near or over portions of the west coast of Florida, the National Hurricane Center said Monday.

“Obviously, these tracks can change,” he said.

Tropical storm conditions were expected in parts of the Florida Keys by late Monday, and Elsa could dump up to 6 inches of rain over parts of Florida, which could result in flooding, the center said.

Stacie Dawn Fang, 54, was the first victim identified in the condo collapse. She was the mother of Jonah Handler, a 15-year-old boy who was pulled alive from the rubble in a dramatic rescue as he begged rescuers, “Please don’t leave me.”

Antonio Lozano, 83, and Gladys Lozano, 79, were confirmed dead by Mr. Lozano’s nephew, Phil Ferro, the chief meteorologist on WSVN Channel 7 in Miami. Mr. Ferro wrote on Instagram: “They were such beautiful people. May they rest in peace.”

Luis Andres Bermudez, 26, lived with his mother, Ana Ortiz, 46, and stepfather, Frank Kleiman, 55. Mr. Bermudez’s father confirmed his son’s death on social media, writing in Spanish: “My Luiyo. You gave me everything … I will miss you all of my life. We’ll see each other soon. I will never leave you alone.”

Manuel LaFont, 54, was a businessman who worked with Latin American companies. His former wife, Adriana LaFont, described him as “the best dad.” Mr. LaFont’s son, 10, and daughter, 13, were with Ms. LaFont when the building collapsed.

Andreas Giannitsopoulos, 21, was in South Florida visiting Mr. LaFont, a close friend of his father’s. He was studying economics at Vanderbilt University and had been a decathlon athlete at his high school. An image of him is on a mural outside the school’s athletic facility.

Leon Oliwkowicz, 80, and Christina Beatriz Elvira, 74, were from Venezuela and had recently moved to Surfside, according to Chabadinfo.com, which said they were active in the Orthodox Jewish community in greater Chicago, where one of their daughters lives.

Marcus Joseph Guara, 52, lived with his wife, Anaely Rodriguez, 42, and their two daughters, Lucia Guara, 10, and Emma Guara, 4. Mr. Guara was remembered as a kind and generous man, a godfather to twins and a fan of hard rock music.

Hilda Noriega, 92, was a longtime resident of Champlain Towers South who enjoyed traveling and whose family described her “unconditional love.” Hours before the collapse, she attended a celebration with relatives.

Michael David Altman, 50, came from Costa Rica to the United States as a child, and was an avid racquetball player as a youth. “He was a warm man. He conquered a lot of obstacles in his life and always came out on top,” his son, Nicholas, told The Miami Herald.

Also killed in the collapse were Claudio Bonnefoy, 85, and Maria Obias-Bonnefoy, 69; Graciela Cattarossi, 48; Magaly Elena Delgado, 80; Bonnie Epstein, 56, and David Epstein, 58; Gonzalo Torre, 81; and the 7-year-old daughter of a Miami firefighter, whom the authorities declined to name.

Florida’s high-rise building regulations have long been among the strictest in the nation. But after parts of Champlain Towers South tumbled down on June 24, killing at least 24 people and leaving 121 unaccounted for, evidence has mounted that those rules have been enforced unevenly by local governments, and sometimes not at all.

Miami-Dade County officials said last week that they were prioritizing reviews of 24 multistory buildings that either had failed major structural or electrical inspections required after 40 years or had not submitted the reports in the first place. But the county’s own records show that 17 of those cases had been open for a year or more. Two cases were against properties owned by the county itself. The oldest case had sat unresolved since 2008.

The city of North Miami Beach had tried and failed for years to bring a 10-story condo building within its borders, Crestview Towers, into compliance with the 40-year recertification requirements. When the building’s condo association finally submitted the required paperwork last week, about nine years late, it documented critical safety concerns, a city spokesman said. Officials evacuated the building on Friday.

Meanwhile, the same local governments were pursuing a haphazard approach to identifying other potentially unsafe buildings across the region, with the age and height criteria that would prompt added scrutiny varying from one place to the next. At least one local government, the village of Key Biscayne, was opting to conduct no extra inspections at all, an official there said.

Even if building auditors focus only on towers of 10 stories or more that were built in the 1970s and 1980s, the task would still be daunting. An analysis of property records by The New York Times shows that at least 270 such buildings dot the skylines of Miami-Dade County’s cities, villages and towns, with dozens more in the county’s unincorporated reaches.

As rescue crews continue to comb through the remains of the Champlain Towers South condominium complex near Miami, federal officials have brought in support from across the globe — including an elite team of Israeli search-and-rescue officers trained to respond to building collapses.

Along with urban search-and-rescue task forces activated from across the country and a similar elite team from Mexico, more than a dozen Israeli officers have been working to dig through the rubble left from the collapse and provide emotional support to the families waiting in agonizing limbo for word of their loved ones.

In interviews, four of the officers, their combat boots still coated in gray dust from the rubble, described an emotional process to help confront what they said was the most complicated search-and-rescue operation they have been a part of. After arriving June 27 and going straight to the site, they have spent hours interviewing more than 100 families and condo employees to help construct a map of the towers.

The unit, sent by the Israel Defense Forces, helped construct 3-D models of the apartments, in part to help guide the rescue teams through the rubble. One model resembled a game of Tetris: different-colored and shaped blocks stacked together to form apartment units, with rescuers focusing on the bedrooms.

“It’s a very rare disaster,” said Yuval Klein, 42, an officer with the rescue unit. “It’s just a mountain of concrete, broken down into small pieces, and bits and scraps of personal items of a house, you know? Suitcases, clothes, books, pages, everything, everything a person has in his house.”

Mr. Klein is among the officers who have not only visited the rubble, but have had to press families and apartment staff for every minute detail about the apartment and their loved ones: Where was the bed located? What were items specific to the apartment, and where were they? Which direction did they sleep? What color was the carpet?

“It’s a story — each house as a story, and that’s what you see inside the rubble,” said Tal Levy Diamenshtien, who works with Mr. Klein. “You see stories. You see dolls. You see parts of life.”

Members of the Israeli team have also briefed the families repeatedly, and have been among the officials available to answer questions and comfort those who are grieving.

The officials said they were impressed by the scope of manpower and technology sent to the site. The weather conditions in Florida — with intense heat and thunderstorms that took officers by surprise — have only exacerbated the complexities.

“You see the great power of this nation,” said Golan Vach, the commander of the Israeli National Rescue Unit. He described watching rescuers using shirts from their fire departments to help cover victims they had found, in order to protect the bodies as they recovered them from the rubble.

“When you see the United States flag and the department flag — it means a lot. It means there’s a contract between you citizens and us,” he added. “If something happens, we’ll be there for you. I think the families need to know that.”