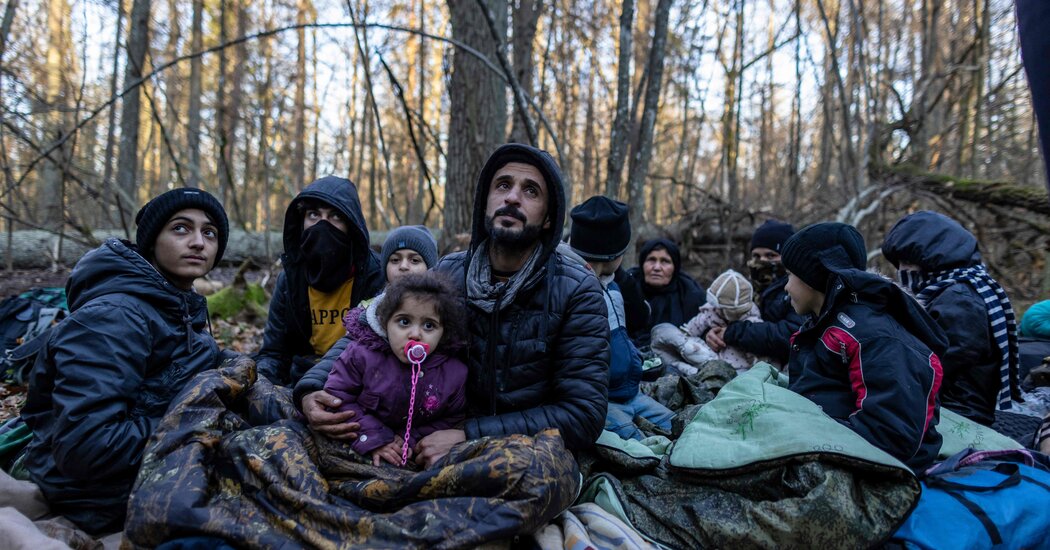 As the crisis on the border between Poland and Belarus deepened on Wednesday, European leaders pledged solidarity with a Polish government despite longstanding disputes that have left relations between Brussels and Warsaw in tatters.

The standoff at the hastily constructed razor-wire fences on Poland’s eastern border has been building for months but escalated in recent days as the number of migrants moving from Minsk to the border has grown from dozens to thousands.

The European Council President, Charles Michel, stood with Prime Minister Mateusz Morawiecki to condemn what both leaders said was an orchestrated attempt to use human beings as weapons.

“Poland is facing a serious crisis that we take seriously, and it should enjoy the solidarity and unity of the whole European Union,” Mr. Michel said at a news conference in Warsaw. “It is a hybrid attack, a brutal attack, a violent attack and a shameful attack.”

Western officials say that President Aleksandr G. Lukashenko of Belarus is allowing asylum seekers from the Middle East to fly into his country by the thousands and then funneling them westward toward Poland, Lithuania and Latvia.

They say Mr. Lukashenko is retaliating against sanctions imposed after his disputed 2020 election victory.

Mr. Michel said that in order to resolve the crisis, the bloc was looking into a “serious diplomatic initiative” addressing the countries of origin of migrants, as well as transit countries.

Foreign ministers of the bloc’s 27 countries are poised to discuss imposing further sanctions against Belarusian officials at a meeting on Monday.

In a reversal of prior statements by E.U. officials, Mr. Michel also said the bloc would consider the possibility of financing a wall at the border from the E.U. budget.

But Poland, which has dispatched some 17,000 troops to stand guard, has gone further, accusing Moscow of directing the effort.

“Lukashenko is the executor of the latest assault, but this assault has a sponsor who is to be found in Moscow, and this sponsor is President Putin,” Mr. Morawiecki said during an emergency debate in the Polish parliament on Tuesday.

Maria V. Zakharova, the spokeswoman for the Russian Foreign Ministry, called Poland’s allegations that Russia was behind the crisis falsehoods “beyond all possible bounds and norms.”.

Thousands are left stranded on the border as the harsh winter sets in, and there was no sign that the tension was easing on Wednesday. Eight people have died at the border so far, according to the Polish authorities.

Yet estimating the number of migrants at the borders remains difficult, because the Polish authorities have restricted access to the area to journalists and humanitarian and advocacy groups.

While the largest groups of migrants have been concentrated outside the town of Kuznica Bialostocka, Poland’s defense minister, Mariusz Blaszczak, said that there were signs they were dispersing to try and test the border at multiple points.

Mr. Blaszczak said that rather than “one large group,” there were now “smaller, albeit numerous groups attacking the Polish border in parallel.”

“It was not a calm night, indeed there were many attempts to break through the Polish border,” Mr. Blaszczak told Polskie Radio on Wednesday morning. But he said that all those who crossed had now been detained, according to reports from the army and border guard.

This summer, after more than 100 migrants made their way across the border from Belarus into the small Baltic nation of Lithuania, the Lithuanian government stepped up efforts to slow the flow of people it said were being used as “hybrid weapons” against the European Union.

The authorities built a fence and lawmakers in Lithuania — which is a member of the European Union — passed a law fast-tracking asylum procedures to process and return migrants faster, and legalizing the detention of migrants for up to six months without a court order.

But as the numbers of migrants reaching Lithuania have swelled in recent weeks, officials there have put in place more restrictions and the Parliament voted to tighten a state of emergency — the most sweeping edict of its kind since the nation declared its independence in 1990 and broke free from the Soviet sphere.

Under the new law, which took effect on Wednesday, migrants in Lithuania are not allowed to communicate in writing or by telephone with anyone, except to contact the country’s authorities.

The measure covers the border with Belarus, stretching several miles inland in eastern Lithuania. It also includes migrant accommodation facilities throughout the country.

The movement of vehicles in an area within about three miles of the border without the permission of the border guards is restricted and entry is to be banned for civilians, except for local residents and those who have property in the area.

“A state of emergency is an instrument that has never been used in our independent state’s practice,” Prime Minister Ingrida Simonyte said this week, highlighting the urgency of the situation. She said the decision to extend the measures will be reviewed in one month.

European Union officials said they were analyzing air traffic to Minsk, the Belarusian capital, as potential evidence that President Aleksandr G. Lukashenko of Belarus was effectively orchestrating a flow of migrants toward E.U. countries.

The timetable for the Minsk airport, effective Oct. 31, shows at least 47 scheduled flights per week from Middle Eastern locations, compared with no more than 23 flights per week on its previous schedule. The additional flights include a new daily route from Damascus on an Airbus A320 operated by the Syrian airline Cham Wings.

Travel agencies in the Kurdistan Region of Iraq, where many of the migrants come from, have been offering packages that include visas to Belarus and airfare either through Turkey or the United Arab Emirates for about $3,000.

Peter Stano, a spokesman for the E.U.’s executive arm, said officials were monitoring flights from around two dozen countries that were ferrying migrants into Minsk — including Morocco, Syria, South Africa, Somalia, India, Sri Lanka, Algeria, Libya and Yemen. The European commissioner for home affairs, Ylva Johansson, said the E.U. was stepping up “outreach with partner countries” to prevent migrants from coming to Belarus in the first place.

“Our urgent priority is to turn off the supply coming into Minsk airport,” she said in a tweet.

The E.U.’s standoff with Mr. Lukashenko has been intensifying ever since he crushed street protests against election fraud last year. Mr. Lukashenko claims the West is trying to topple him by supporting the opposition, and has arrested thousands of dissidents and journalists, while many have left the country.

Mr. Putin told Ms. Merkel, the Kremlin indicated, that there was nothing he could do.

“The Russian president suggested that the problems that have arisen be discussed directly by representatives of European Union countries with Minsk,” the capital of Belarus, a Kremlin statement describing Ms. Merkel’s phone call said.

The public posturing by Berlin and Moscow over Ms. Merkel’s phone call to Mr. Putin highlighted how Russia continues to staunchly back Aleksandr G. Lukashenko, the Belarusian strongman who violently put down an uprising against him last year.

By urging the West to talk directly to Mr. Lukashenko over the migration crisis that European officials say was created by Mr. Lukashenko to put pressure on Europe, the Kremlin was seeking to increase its ally’s leverage in the crisis.

“Belarus has repeatedly, at the present stage at the borders, proposed holding consultations, negotiating, resolving these issues on the basis of international law,” Sergey V. Lavrov, Russia’s foreign minister, said in a news conference in Moscow alongside his Belarusian counterpart.

In another show of unity, two nuclear-capable Russian Tu-22M3 long-range bombers flew along Belarus’s borders with Poland and Lithuania on Wednesday. Belarus’s defense ministry said the allied air patrol of the country’s western borders would now be a regular occurrence given “the emerging situation in the air as well as on the ground.”

But Belarusian officials continued to insist they were not at fault in the crisis. The country’s foreign minister, Vladimir Makei, castigated Poland for deploying thousands of soldiers “against crying women and children and not allowing them into Europe.”

“This is a violation of all norms,” Mr. Makei said alongside Mr. Lavrov. “The accusations that Belarus is allegedly organizing these flows are totally groundless.”