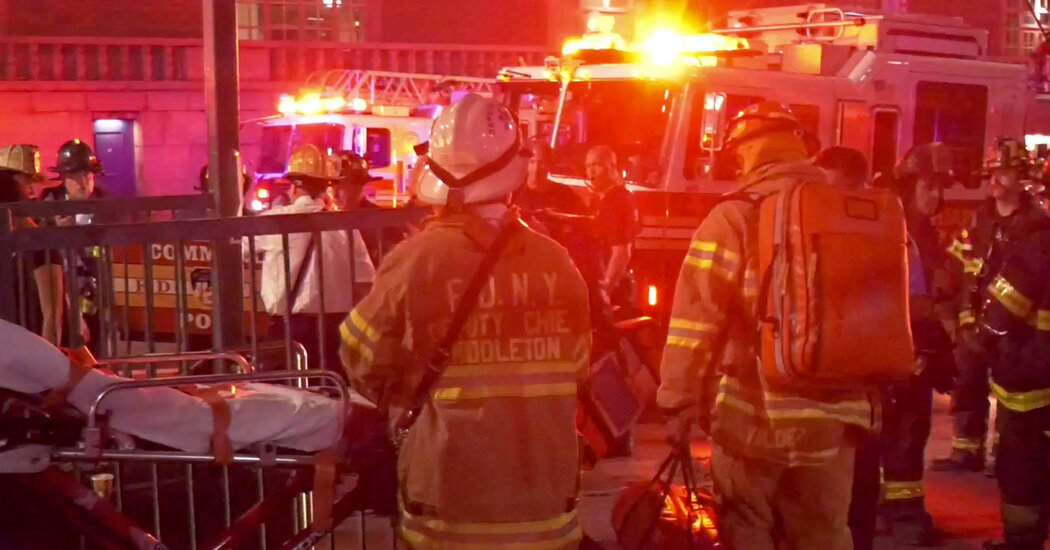 For most New Yorkers, it was a blink-or-you-miss-it event. Lights flickered across the city on Sunday night. Some clocks reset.

But for the city’s subway system, the power blip had a far greater impact: Five trains were stuck on the tracks in the Bronx and in a tunnel under the Harlem River, as delays snarled the network. Some riders evacuated subway cars on their own, violating Metropolitan Transportation Authority rules by climbing onto the tracks — and forcing subway officials to cut power to the third rail to avoid the possibility of electrocution.

The moment underscored the fragility of the transit system, which has suffered from decades of disinvestment and was just beginning to embark on an ambitious program of infrastructure upgrades when the pandemic hit. The problems also threatened to undermine confidence in a system whose finances are already suffering from a pandemic-induced drop in ridership.

The incident set off a rush to respond among state officials, as well as a challenge for amateur sleuths eager to determine what went wrong.

In New York City, electricity courses through a network of high-voltage transmission feeders, substations and lower-voltage distribution feeders on its way to powering homes and businesses. Transmission feeders carry electricity in bulk, much as the Brooklyn-Queens Expressway carries vehicles en masse. It was that sort of feeder, running underground in Long Island City, Queens, that failed at approximately 8:25 p.m. on Sunday, causing a manhole fire and a momentary dip in voltage across all five boroughs of New York City and Westchester.

The electrical system immediately compensated for the voltage dip, according to the utility, Con Edison, but not before many New Yorkers noticed it.

A video taken in Midtown Manhattan and posted on Reddit shows lights flickering and then what appeared to be a small explosion across the East River. Jamie McShane, a spokesman for Con Edison, said the utility is still investigating if the explosion was related to the manhole fire.

Others posted video of what appeared to be billowing smoke rising from Queens, but Con Edison said that was actually release of steam from another company’s power plant — possibly in response to the transmission event. A spokeswoman for that plant’s operator had no immediate comment.

On Monday, Gov. Kathy Hochul, less than a week into her new job, appeared outside the Bowling Green subway station at 7 a.m. to announce an investigation into the events of the night before.

Ms. Hochul controls the subway system, via the state M.T.A., yet her predecessor, Gov. Andrew M. Cuomo, often sought to distance himself from the system and its problems. Until Monday, it had been unclear how Ms. Hochul regarded her role.

In her remarks across from M.T.A. headquarters, she seemed intent on making clear that she was in charge. She said that the series of events that unfolded Sunday night appear to have been “unprecedented,” albeit in an extremely technical sort of way, and she promised a full and transparent investigation.

“I want all the answers,” she said. “It’s not possible for us to have them at this time. But I’ll make sure, in the interests of full disclosure, that everyone knows as soon as I do.”

Later that day, she seemed to have found some answers. The M.T.A., which has a long history of malfunctioning electrical systems, was at fault.

“As a result of the review I directed this morning, the M.T.A. has uncovered a sequence of failures that resulted in some backup systems not providing power as designed last night, including an additional failure to quickly diagnose the underlying cause,” Ms. Hochul said in a statement. She said she had ordered two engineering firms to help in a “deep dive” and to recommend how to avoid a recurrence of the events.

The voltage dip did not affect the third-rail power that fuels the subway trains, nor did it immediately have an impact on rail operations, according to the M.T.A.

Instead, the M.T.A. promptly switched to a backup battery-operated system. That system, which dates back to 2005, is intended to act as a bridge until the M.T.A.’s backup, fuel-powered generators go online.

But for reasons that remain unclear, those generators never did go online — a development M.T.A. officials remained unaware of, because the M.T.A.’s automated system failed to alert them, as it was supposed to. Further, the M.T.A. system is supposed to automatically revert to the Con Edison grid, once electricity is restored. It failed to do that, too.

By 9:14 p.m., the battery-operated system had run out of juice, wiping out part of the M.T.A.’s rail communications systems.

Operators were unable to see the locations of trains on eight lines: the seven numbered lines as well as the L.

Of the 88 trains that were moving around the subway system at the time, workers managed to get 83 into stations so that people could disembark. Five trains were stuck in between stations, stranding more than 500 passengers.

Riders on one stalled train exited a subway car onto the tracks at a station in the Bronx that was filled with firefighters.

Stephanie Joseph, 30, a graduate student, was traveling from Brooklyn to the Javits Center to catch a 10:30 p.m. bus to Philadelphia when her No. 2 train got stuck near Bergen Street about 9:26 p.m.

She said communications from the train conductors were minimal. Of the dozen or so people in the train car with her, one was a man worried about getting to his shelter by curfew. The conductor wrote him a note on a napkin.

At about 10:30 p.m., the train was able to inch up to the platform so that passengers could disembark. Ms. Joseph said the next time she travels from Brooklyn to Midtown, she would reconsider taking the subway.

“I would most likely, dare I say it, probably Uber there,” she said.

Power problems have bedeviled the subway before. In 2017 when the subway was plagued by delays in what became known as the “Summer of Hell,” Mr. Cuomo identified the power supply as one of the main culprits and shifted substantial blame onto Con Edison, promising to hold it accountable.

Transit advocates said they were worried about the subway system’s resiliency as climate change becomes a growing concern in the city.

“New York’s recovery hinges on fast, frequent, and reliable public transit service,” said Danny Pearlstein, a spokesman for the Riders Alliance. “But aging infrastructure and extreme weather are both increasingly getting in our way and scrambling commutes.”