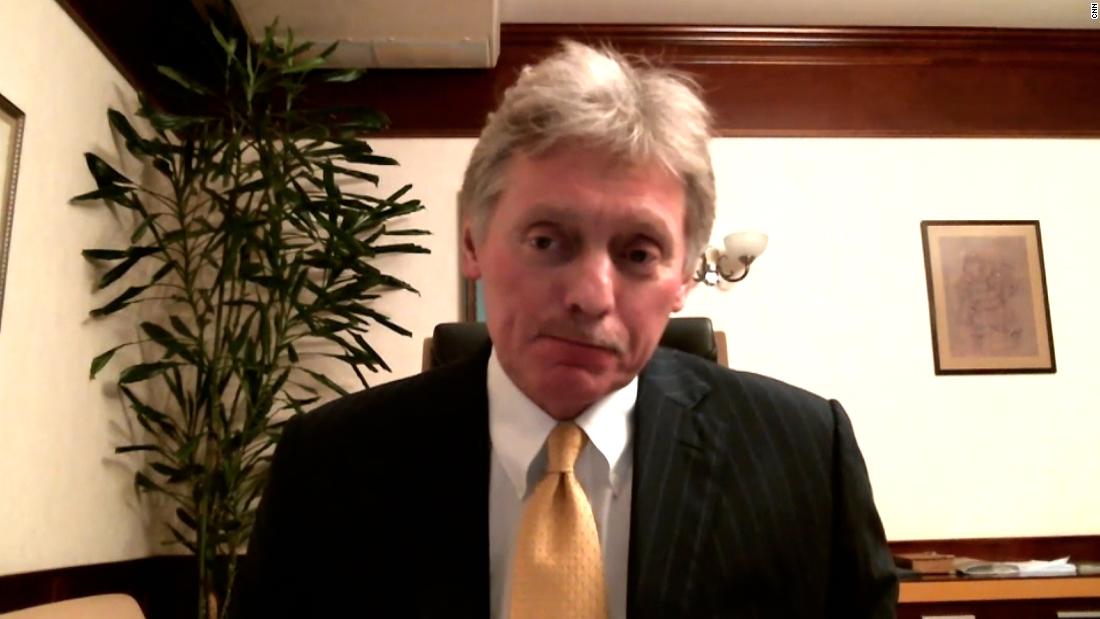 Kremlin spokesman Dmitry Peskov told reporters that Washington and US outlets have played up fears of a Russian invasion.

“To our dismay, American media have lately been publishing a very large amount of unverified, distorted and deliberately deceitful information about what’s happening in Ukraine and around it,” Peskov said Monday.

Zelensky, however, restated his position that the threat from Russia remains “dangerous but ambiguous,” and it is not certain that an attack will take place, the official said.

On Monday, Peskov called on the US and its European allies “to take a more constructive approach,” and said the recent threat of sanctions from the United Kingdom is “extremely worrying.”

“It’s cause for serious concern for international financial structures and businesses,” Peskov said. “It’s an open attack on business.”

The Biden administration has also identified several elite Russian government officials and business leaders that the US intends to sanction if Russia invades Ukraine, a senior administration official told CNN.

“In general, the Anglo-Saxons are widely escalating tensions on the European continent,” Peskov said.

Diplomatic efforts to de-escalate the situation are ongoing. Last week both the US and NATO presented Moscow with written responses aimed at deterring a Russian incursion of Ukraine. Russian Foreign Minister Sergey Lavrov said Thursday that the letters failed to address Moscow’s concerns over the eastward expansion of the military alliance.

On Monday, a senior US State Department official said that Russia responded in writing to the US’ written response.

Moscow’s response comes ahead of a planned phone conversation between US Secretary of State Antony Blinken and Russian Foreign Minister Sergey Lavrov on Tuesday.

Also on Tuesday, UK Prime Minister Boris Johnson will fly to Ukraine for talks, where he will announce £88 million (approximately $118 million) in new funding, according to a Downing Street statement.

The United Nations Security Council (UNSC) met to discuss the crisis on Monday, and US Ambassador to the UN Linda Thomas-Greenfield said Russia’s actions could have widespread consequences.

“Russia’s aggression today not only threatens Ukraine. It not only threatens Europe. It threatens the international order this body is charged with upholding,” she said. “It is crucial that this Council address the risks that their aggressive and destabilizing behavior poses across the globe.”

Thomas-Greenfield emphasized the impact on those who are already suffering due to Russia’s invasion of eastern Ukraine, which has already killed more than 14,000 Ukrainians, she said.

“If Russia further invades Ukraine, none of us will be able to say we didn’t see it coming. And the consequences will be horrific, which is why this meeting is so important today,” she added.

“Nearly 3 million Ukrainians — half of whom are elderly people and children — need food, shelter, and life-saving assistance. Devastating as this situation is, it would pale in comparison to the humanitarian impact of the full-scale land invasion Russia is currently planning in Ukraine,” Thomas-Greenfield said.

Zhang Jun, China’s Ambassador to the United Nations, condemned the UNSC for holding an open meeting on the tensions, which Russia and China attempted to block, and backed Russia’s claim that it would not attack Ukraine.

“We believe that the security of one country cannot be achieved at the expense of the security of other countries. Still less can regional security be guaranteed by the intensifying or even expanding military groups,” said Zhang.

“Today in the 21st century, all parties should completely abandon the Cold War mentality and come up with a balanced, effective and sustainable European security mechanism through negotiations.”

The US last week called for the meeting. It is the first venue at the United Nations where American and Russian officials both speak about what is happening.

The council comprises 15 members, each of whom has one vote. It is responsible “for the maintenance of international peace and security,” according to the UN website. Every UN member state has to comply with the council’s decisions.

“If Russian officials are serious when they say they don’t want a new war, Russia must continue diplomatic engagement and pull back military forces it amassed along Ukraine’s borders and in the temporarily occupied territories of Ukraine,” he wrote on Twitter. “Diplomacy is the only responsible way.”

Also on Sunday, Russian Foreign Minister Lavrov placed the blame on the eastward expansion of NATO.

Lavrov rejected the suggestion that NATO is a defensive organization.

“The line of defense has already come close to us,” Lavrov told Russia’s Channel One evening show on Sunday.

“It turns out each time that the line they are supposed to defend is moving further east. Now, it has already come close to Ukraine.”