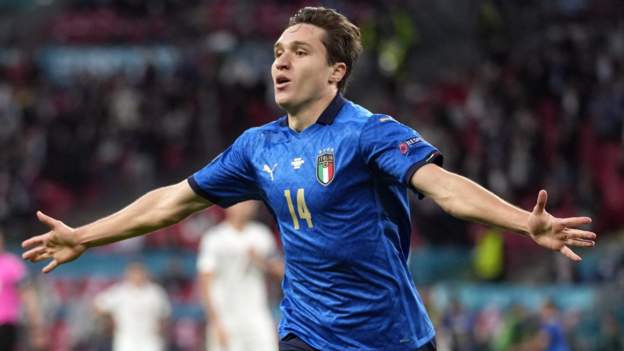 Italy beat Spain on penalties to reach the Euro 2020 final after an enthralling semi-final at a noisy Wembley.

After Alvaro Morata’s penalty was saved, Jorginho strolled up to score and set up a final with either England or Denmark in London on Sunday.

Federico Chiesa looked as if he had sent Italy – who are unbeaten in 33 games – to the final in normal time with a delightful curled finish to cap off a quick counter.

But Morata stepped off the bench to slot an equaliser with 10 minutes to go after a one-two with Dani Olmo.

However, the Juventus forward’s penalty miss in the shootout proved costly as Spain lost a semi-final for the first time in their history.

Fears about an empty stadium or quiet crowd proved unfounded despite tickets still being on sale during the day, and with fans unable to fly from either country without having to quarantine for too long to watch the game.

Roberto Mancini’s Italy side have been arguably the best team in the tournament – and had won their previous 13 games – and deserve their place in the final.

However, this was the toughest they have had to work, and they only managed one shot between Morata’s equaliser and the shootout.

It is an especially sad end to the tournament for Morata. He has wasted numerous chances during the tournament – with his family having to endure threats from fans – and his equaliser looked set to change the narrative before he failed from the spot.

Italy’s style of play has changed as the tournament has gone on, with the Azzurri reverting to their old defensive ways, and it has taken them through to the final.

They were free-scoring and impressive in the group stages – while also solid at the back – taking their run to 11 wins in a row without conceding.

But they needed extra time to beat Austria in the last 16 and then dug in to beat Belgium 2-1 last time out.

Mancini took over a team that failed to even qualify for the 2018 World Cup and has now led them to the next major final.

Surprisingly, the four-time world champions have only ever won one European Championship – all the way back in 1968.

Emerson was a competent but unspectacular replacement for the injured Leonardo Spinazzola at left-back and hit the bar from a tight angle with their only effort of the first half.

Their breakthrough came from a counter-attack that began with goalkeeper Gianluigi Donnarumma and ended with Chiesa’s perfect finish from near the edge of the box leaving Unai Simon rooted to the spot.

They had a couple of chances to wrap the game up, but Domenico Berardi shot straight at Simon both times before Morata equalised.

From that stage on it looked as if they were playing for penalties – and that was the way it turned out.

The Azzurri got off to the worst possible start when Manuel Locatelli’s penalty was saved, but they converted the rest of their spot-kicks with Jorginho nonchalantly waiting for Spain keeper Simon to move before slotting the other way to send them through to the final.

Spain’s wastefulness catches up with them

Spain have grown into the tournament and go home as the top scorers to date with 13 goals. And yet it should have been much more.

Ten of those goals came in two games and otherwise they have struggled in front of goal. Slovakia are the only team they beat in 90 minutes at Euro 2020.

They started with no recognised striker on Tuesday – Morata was left on the bench – with Mikel Oyarzabal and Dani Olmo lively but wasteful in front of goal.

Luis Enrique’s side ended with 16 shots to Italy’s seven – but managed only one more effort on target than their opponents at Wembley.

Spain had won all five previous semi-final appearances in major tournaments – including their successes in 2008, 2010 and 2012 when they dominated world football – but that 100% run has now come to an end.

They played some good football and deserved to level when Morata ran onto Olmo’s return pass to slot home.

But in the shootout Olmo blazed over before Morata’s weak kick was saved.

The summer is not over for six of them, however, with Olmo, Simon, Oyarzabal, Pau Torres, Eric Garcia and Pedri – who all played on Tuesday – in Spain’s Olympic football squad. The tournament in Tokyo starts in 17 days.