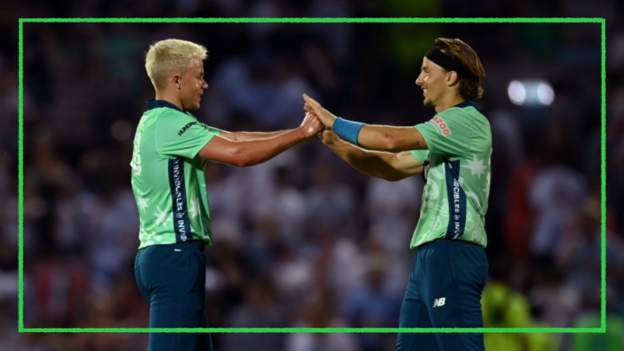 Oval Invincibles edged out Manchester Originals by nine runs as the men’s Hundred kicked off in entertaining fashion at The Oval.

After a thrilling opening women’s game on Wednesday, the men’s opener also went the distance as Manchester chased 146 to win.

After a poor start Carlos Brathwaite hit 37 from 29 balls but, with 19 needed from the last five balls, the West Indies international was caught.

It was a fine Invincibles bowling performance which secured the win after captain Sam Billings had earlier hit 49 to lead a recovery from 32-3 to 145-8 from their 100 balls.

Here are BBC Sport’s takeaways from the Invincibles’ win.

Another entertaining night at The Oval

This match didn’t quite match the drama of the women’s opener but it was still another entertaining night at The Oval.

Manchester started badly in their chase, England’s Phil Salt and Jos Buttler making just four and eight respectively. After 34 balls they were 48-4.

But with Brathwaite at the crease almost anything is possible – as England fans know after he downed Ben Stokes in stunning fashion in the 2016 Twenty20 World Cup final.

Needing 47 runs from the last 20 balls he hit England’s Tom Curran for six and the crowd of 18,126 – another positive attendance at the start of cricket’s newest competition – were nervous.

Ultimately, though, it was the other Curran, Sam – Tom’s younger brother – who had Brathwaite caught at long-on, leaving the West Indies star to slump from the field dejected.

At the halfway stage, Manchester were probably favourites after restricting the Invincibles to a below-par score.

They bowled excellently, however, as their line-up full of international talent delivered.

England superstar Buttler was not allowed to be his free-flowing self and eventually miscued West Indies international Sunil Narine for a simple catch at extra cover.

Sam Curran opened the bowling and dismissed the dangerous England batter Phil Salt and was trusted with the key deliveries at the end, as was his brother Tom.

Tom had Calvin Harrison, who made 23 from 16 in support of Brathwaite, caught with eight balls left.

Another England international. Reece Topley had the dangerous Joe Clarke caught behind for 15 and a less well-known name, spinner Nathan Sowter, chipped in with 2-18 in a strong all-round showing which bodes well for the rest of the tournament.

Buttler, a key member of England’s 2019 World Cup-winning team, is one of the most destructive batters in the world at his best.

Here, as he did in England’s Twenty20 win over Pakistan on Tuesday, he struggled for fluency.

He only hit one four in his 10 balls – a reverse sweep a ball before he was dismissed.

All of Manchester’s star names, Buttler and Salt with the bat, or Matt Parkinson with the ball, had quiet nights.

Buttler will only have one more game in The Hundred before leaving for England duty but the others must find their feet for Manchester to go far.