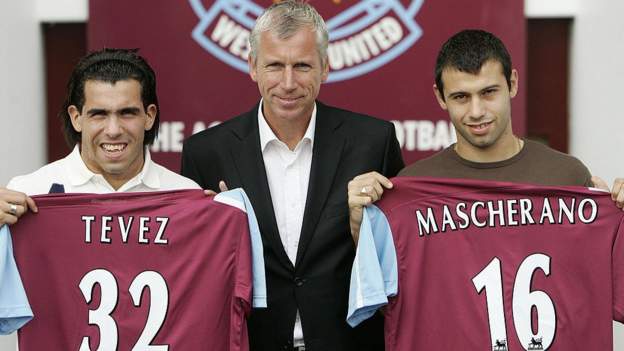 The story began with tension and awkwardness, and ended in the sort of drama that would make Hollywood blush.

On 31 August 2006, 15 years ago on Tuesday, Argentine duo Carlos Tevez and Javier Mascherano signed for West Ham United, arriving from Brazilian club Corinthians in a deal that was shrouded in mystery.

It would dominate conversation all season, cast a shadow over the Premier League relegation battle and even result in legal proceedings that lasted two years.

‘If you make a signing like that, you should be shouting about it from the rooftops’

After impressing at the World Cup in Germany for Argentina that summer, Tevez had been linked with a move to Chelsea. But suddenly the pair appeared, looking rather stunned, holding shirts alongside Hammers boss Alan Pardew at Upton Park.

Their statement didn’t elaborate on much, specifying only that they had signed permanent contracts and they represented a coup. But it was the suggestion that “all other aspects of the transfer will remain confidential and undisclosed” which raised eyebrows.

“I was at work and I got a text from a West Ham-supporting mate who said we’d signed the two of them, and I literally replied with: ‘Yeah, and the cows jumped over the moon,'” Daniel Hurley, author of The Greatest Escape – a book about the team’s 2006/07 campaign – tells BBC Sport.

“I’m baffled that nobody looked into [the transfer] more at the time. To pull off signings like that and basically say ‘we don’t want to talk about it’ is so strange. If you make a signing like that, you should be shouting about it from the rooftops.”

As it turned out, the club had broken third-party ownership rules after it was found that the rights to both Tevez and Mascherano were partially held by agent Kia Joorabchian’s company, Media Sports Investment (MSI).

The issue came to light when Mascherano joined Liverpool in January, having made just five league appearances in East London.

By then they’d been taken over by a consortium led by Icelandic businessman Eggert Magnusson, and Pardew had been sacked and replaced by Alan Curbishley, with West Ham embroiled in a relegation battle.

Tevez’s first goal came after 1,142 goalless minutes on 4 March in a defeat by Spurs – two days after the club was officially charged with wrongdoing over the deal – before he scored in victories over Middlesbrough and Blackburn Rovers.

“Carlos’ English wasn’t great, but he had a good interpreter who fit in so well with the lads,” said January signing Matt Upson.

“He would help him around the training ground, but everyone accepted Carlos – he had that type of character about him.”

‘If Wigan or Watford broke the rules, we’d have been getting a points deduction’

Pressure was growing at the bottom, with West Ham’s rivals demanding a points deduction for the Tevez and Mascherano affair. The Premier League fined them £5.5m, a record at the time, a day before they beat relegation rivals Wigan on 28 April.

“The timing of the decision annoyed me,” Wigan boss at the time, Paul Jewell, says. “They came to Wigan the next day, and they were bouncing; they were on a run and beat us 3-0. It should have been dealt with straight away, when it was first flagged up.

“I had someone from the Premier League in my office, and I said: ‘If that had been Wigan or Watford who broke the rules, we’d have been getting a points deduction – the reason West Ham aren’t is because they are a big club.’ His words were: ‘I agree with you, but I’ll never say that publicly.’ I think they were hoping West Ham were going to go down.”

“The punishment wasn’t a points deduction at that point, it was relegation,” Hurley adds. “Any deduction sends us down, and I think they held the decision so late assuming we’d be down anyway. But we kept winning.”

Having been 10 points behind 17th place in early March, a run of six wins in eight games left the Hammers needing a win against already-crowned champions Manchester United at Old Trafford to guarantee safety on the final day.

‘If it was fiction, you’d think it was unrealistic’

Tevez would have the final say as he scored the goal to secure West Ham’s survival at Old Trafford.

“If it was fiction, you’d think it was unrealistic,” Hurley says. “We had no idea whether we owned Tevez or not, so it was all very murky even then. But we were hoping he would stay, especially after that game.”

Sheffield United, who were instead relegated after a final-day loss to Wigan, would then take West Ham to a tribunal and were awarded a £20m out of court settlement in 2009, after it was agreed that Tevez’s goals were the pivotal difference in the outcome two years earlier. The Argentine left for Manchester United in the summer of 2007.

“Nobody ever really talks about Mascherano with us,” Hurley says. “But when we played Man United the following year, Tevez’s first return, before the game, he walks around the pitch doing the ‘Hammers’ sign. He wasn’t even playing for us; he was only with us a few months.”

He may have come in through the back door, but left an east-end icon.