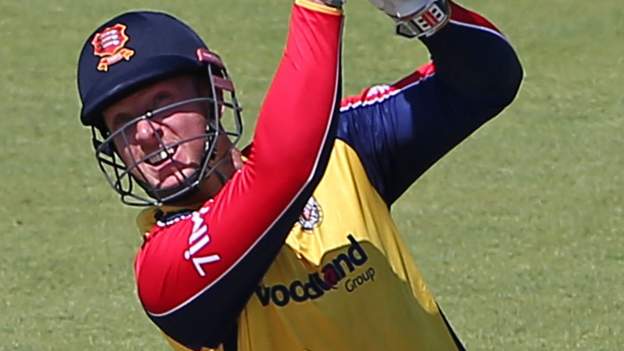 Essex captain Simon Harmer hit a four off the final ball of the innings to seal a thrilling win over Middlesex.

Dan Lawrence (59) and Jimmy Neesham (30) had Essex coasting to victory before Middlesex took five wickets in 10 balls in the last two overs.

Earlier, Stevie Eskinazi struck 102 not out to become only the sixth player to hit a Twenty20 century for Middlesex.

Elsewhere, Gloucestershire cruised to victory over Glamorgan and Derbyshire triumphed over Birmingham.

Eskinazi century not enough for Middlesex

Middlesex would have been confident of securing only their second win of the season after Eskinazi’s unbeaten ton helped them post 183-2.

The opener’s 102 not out from 62 balls was his maiden century in the format and was the joint-highest individual T20 score at Lord’s, and included 11 fours and two sixes.

Essex lost opener Will Buttleman to an early run-out and that brought England international Lawrence in at number three and it was his 59 from 37 balls that would prove to be decisive.

When Neesham cleared the ropes with the last ball of the 18th over, his side needed 16 from the final two overs and were seemingly on course for a comfortable win.

But Tom Helm removed both danger men before Daryl Mitchell took three wickets in the final over to leave Essex needing a boundary from the last ball, which Harmer duly provided to secure a two-wicket win.

Glenn Phillips lit-up the County Ground in Bristol with a wonderful array of shots on his way to 94, to help Gloucestershire to a comfortable win over Glamorgan and move them top of the T20 Blast South group.

The New Zealander produced some eye-catching shots, including a huge reverse sweep over third man off Dan Douthwaite, as he scored his first half-century for the club, but just ran out of balls as his innings ended six short of a century.

A half-century from Benny Howell (53 not out) and 35 from Miles Hammond helped Gloucestershire post a score of 216-2.

Glamorgan opener Nick Selman fell cheaply but important runs came from David Lloyd (44), batting at three, and Australia’s Marnus Labuschagne was playing well before being yorked by David Payne for 33.

Labuschagne’s dismissal was a big blow and although Douthwaite struck 35 off 17 balls, the rest of the lower order failed to fire and Gloucestershire cruised to a 34-run win.

Derbyshire Falcons ended a run of three defeats with victory over Birmingham Bears, who missed the chance to draw level with Yorkshire at the summit of the North group.

The Bears batted first and opener Ed Pollock reached 46 before Logan van Beek had him caught by Matthew Critchley and they were wobbling on 23-3 in the third over, before Michael Burgess (41) and Matthew Lamb (22) steadied the ship.

Falcons bowler George Scrimshaw took two wickets in two balls to dismiss Danny Briggs and Liam Norwell but Tim Bresnan (34 not out) survived the hat-trick ball before going on to make some valuable late runs as the Bears reached 167-9.

In response, Derbyshire set off quickly with Luis Reece hitting 22 from eight balls, but he and fellow opener Harry Came were both gone inside the first two overs.

But the partnership between Thomas Wood (63 not out) and the in-form Leus du Plooy (57) put the Falcons in control.

Wood remained unbeaten and saw Derbyshire home to a five-wicket victory with five balls to spare.

Coming up – Eight fixtures on Friday (all times BST)