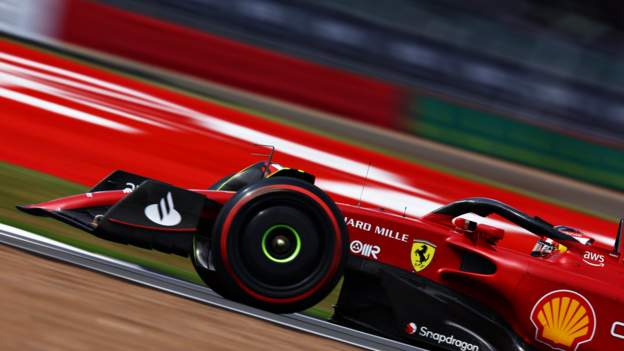 Lewis Hamilton set second fastest time in practice at the British Grand Prix to encourage his struggling Mercedes team at his home race.

He was 0.176 seconds slower than pace-setter Carlos Sainz’s Ferrari, ahead of McLaren’s Lando Norris and Red Bull’s Max Verstappen.

Mercedes introduced several aerodynamic upgrades at Silverstone they hope will close their gap to the front.

Ferrari’s Charles Leclerc was fifth, ahead of Alpine’s Fernando Alonso.

Leclerc did not do a representative qualifying simulation run on the soft tyres, so his time is not directly comparable with those of Sainz, Hamilton and Verstappen.

There were further encouraging signs for Mercedes on the race-simulations runs later in the session, on which Hamilton’s lap times were within 0.1secs on average of Leclerc’s on the medium tyre.

Red Bull and Sainz ran the soft tyre, and on that the Ferrari was very slightly quicker than Verstappen, who complained his rubber wore out after just two laps.

Mercedes are one of several teams to have introduced significant technical developments to Silverstone as they seek to improve their performance.

The world champions have extensive revisions to their so-far recalcitrant W13 car, centring on a new floor design that they hope will limit the “bouncing” that has afflicted the car so far this season and restricted its pace.

Mercedes anyway expect the track characteristics at Silverstone to help them make up some ground on front-runners Red Bull and Ferrari. The surface is smooth, which should limit their bouncing problems, and there are few slow corners to exacerbate the car’s other big weakness.

And the indications from Friday’s one dry session are that they do appear as if they might have made some progress – although Hamilton was again complaining about “bouncing” in the high-speed corners during the session.

Red Bull and Ferrari also have upgrades for the weekend – both have a new engine cover aimed at improving airflow to the rear and increasing downforce.

Verstappen spent the session complaining about a strange noise from the car but as yet Red Bull have given no indication as to what might be causing it.

Williams, the slowest team on the grid, have perhaps the biggest upgrade, with Red Bull-inspired side pods, while Alpine have a new floor as well as redesigned bodywork.

Alex Albon, the only Williams driver to have the new parts, was 14th fastest.