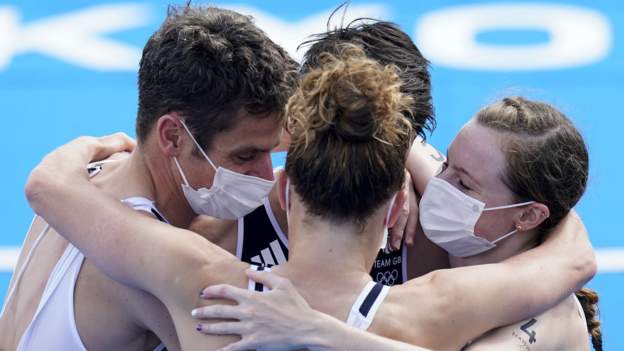 It means it is a triumphant Games farewell for Brownlee, who secured his first gold in his third and final Olympics after the 31-year-old announced in June he was “ready for a new challenge”.

Britain’s seventh gold in Tokyo came after a dramatic finale, Yee pulling clear in the 2km run to cross the finishing line in first having been briefly overtaken in the bike stage by France’s Vincent Luis.

Britain finished 14 seconds ahead of the United States, while France claimed the bronze medal.

“I was pretty scared taking over because the three before me had done the perfect race,” Yee, silver medallist in the men’s individual race, told BBC Sport.

After an excellent first leg from Learmonth, Brownlee broke away from the pack and individual silver medallist Taylor-Brown and Yee maintained the advantage to secure Britain’s third triathlon medal of the week.

Having claimed bronze in London nine years ago and silver in Rio behind his brother Alistair, Brownlee finished fifth in the individual race on Monday.

But he played an important role key role as Britain clinched gold.

“It feels absolutely amazing. It’s my third Olympics and I finally walk away with gold.

“We knew coming into this race there was a lot of pressure on us, we all had to race very well and do everything right and that’s what we did.”