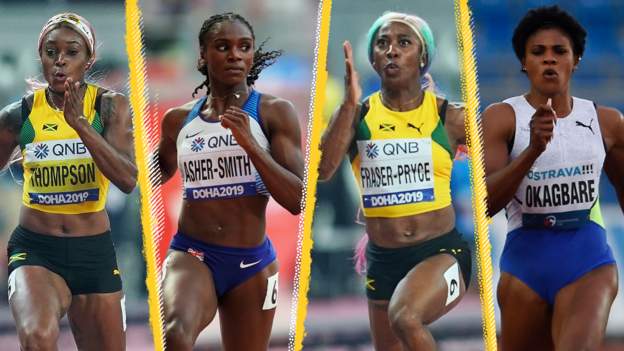 This year the women’s 100m stands out as one of the most hotly-anticipated race of the Games.

The fastest women on the track, including Britain’s major medal hope Dina Asher-Smith, line up in Saturday’s semi-finals from 11:15 BST, with the final at 13:50.

Here are five reasons you should tune in to watch.

“We haven’t always had somebody with a chance of if not winning it, certainly winning a medal,” said Cram. “Dina knows that she’s going to have to be at her best, but she’s in my top three.”

GB have not had a woman in an Olympic 100m final since 2008. Jeanette Kwakye, who finished sixth in Beijing, is confident the fastest British woman of all time can win a medal.

“We know, as a 200m world champion, what Dina is capable of, but she’s also exciting as a 100m runner. She is going to have to be at her absolute best to challenge for medals,” she said.

“What we love about Dina and why we are so confident about her medal chances is that she’s a championship performer and a competitor and she knows how to do it.”

After finishing 11th fastest in the heats, Asher-Smith will run in the first Tokyo 2020 100m semi-final – against Elaine Thompson-Herah and Blessing Okagbare – at 11:15 BST (19:15 local time) on Saturday.

“We all know Shelly-Ann Fraser-Pryce, we all know Elaine Thompson-Herah. Dina is becoming a big name,” said the 1984 1,500m Olympic silver medallist.

“On the men’s side it is an open race. Anyone who makes the men’s 100m final can probably genuinely line up and think .. ‘I could maybe win a medal here’. That’s nice in some respects but in terms of bringing attention to the event, it’s not Bolt and it’s not [Justin] Gatlin or even [Yohan] Blake.

Even better, the top contenders are all in the shape of their lives, says former British 100m champion Kwakye.

“It’s super exciting to see them all line up and be ready to go for a 100m that for the first time in a long time is going to overtake what we think about the men. It is so much more exciting than the men’s right now.”

No fans? No problem

Throughout the Covid-19 pandemic, athletes have regularly competed in empty stadia or in front of very few fans. Their times haven’t suffered.

In June, Fraser-Pryce became the second-fastest woman in history after running 10.63 seconds in Kingston. Only world record holder Florence Griffith-Joyner has run faster.

“All the athletes are saying the same thing, that when you go into your blocks, it doesn’t matter if there are 100,000 people there or nobody. We’ll still see big performances,” said Cram.

Kwakye added: “Sometimes that crowd can add an extra percentage for the home athletes, but there are no home athletes involved here.

“This is all very much about pride, being the best and who’s able to do that so I don’t think the crowd will make that much of a difference. For sure I think we’re still going to have a spectacle.”

Ivory Coast’s Marie-Josee Ta Lou ran the fifth-fastest time of the year in Friday’s 100m heats in Tokyo with a blistering 10.78.

With no one standout performer this year, you can’t pick a winner easily.

Jamaican trio Shericka Jackson, Thompson-Herah and Fraser-Pryce have all gone below 10.8 seconds, a feat most impressive for the latter, who is only getting faster after two years away from the sport to have her son Zyon.

“Shelly-Ann has won it twice before in 2008 and 2012. She has multiple world medals. She knows how to win and she comes into this in the shape of her life and as a mother, so her motivations will change, everything about it is different. Her priorities are different which makes it super exciting,” said Kwakye.

Her fellow Jamaican Jackson has dropped down from the 400m and Kwakye says the 26-year-old could spring a surprise in Tokyo.

“Shericka is doing such an amazing incredible job,” she said. “Being in that position is great for her because she’s got nothing to lose. Nobody is expecting anything of her so it will be really interesting seeing how she goes through the rounds being quite relaxed about it all.”

While Asher-Smith has only clocked the 10th-fastest time this year, she is yet to lose a race and stormed to victory over Fraser-Pryce in May.

It really is anyone’s game.

Before she received a one-month ban that would rule her out of the Olympics after testing positive for marijuana, US sprinter Sha’Carri Richardson was arguably the 100m favourite heading into Tokyo.

Until Fraser-Pryce eclipsed her time in Kingston, the 21-year-old sprint sensation was the fastest woman in the world this year and the sixth-fastest in history after running 10.72 in Miami.

Kwakye says her absence from Tokyo makes the race even more intriguing.

“She has caused such a stir because she’s such an outstanding talent. People are still going to be speaking about her,” she said.

“She thinks that she could have gone there and won, beaten two of the strongest Jamaicans. People will still be watching to see what all the fuss is about.”

“We’ve all been watching her for three or four years because she’s been a prodigious young talent and smashing records at college.

“I hope we’ll see her racing the rest of the season. She could do if she wants to because her ban will finish. Next year the World Championships are in Eugene so I fully expect her back. The next three or four years she could be the dominant force.”