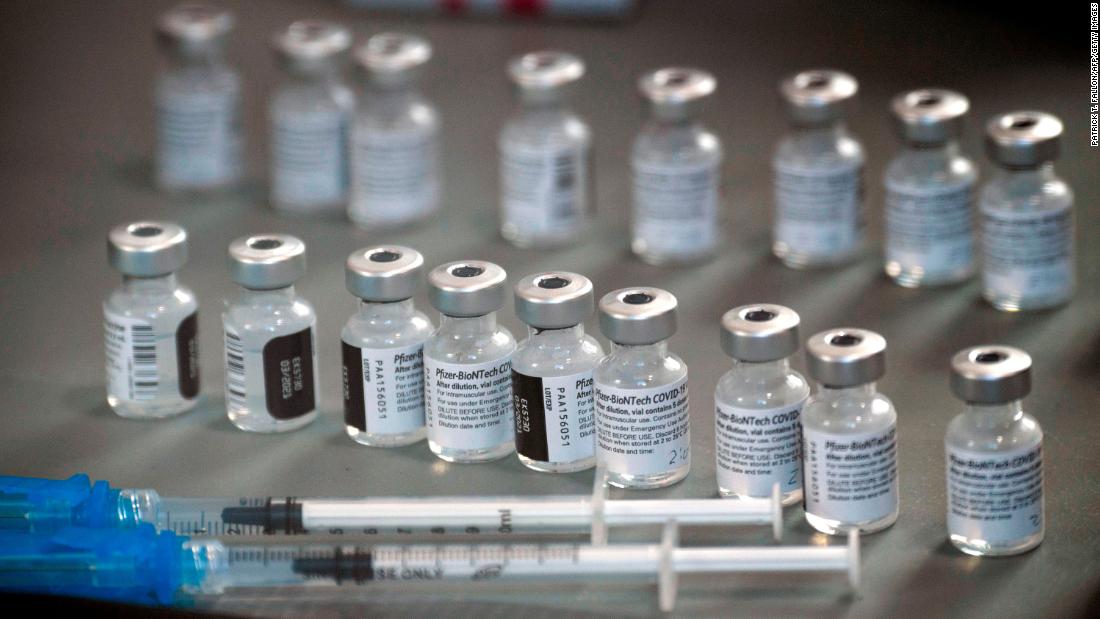 Originally, each vial of Pfizer’s Covid-19 vaccine was designed to contain five doses, but some pharmacists reported they could extract six doses when using certain syringes.

Pfizer CEO Albert Bourla said this increase in doses per vial “provides an additional 20% capacity.” The New York Times first reported Pfizer’s plans to base its vaccine commitment on doses instead of vials.

However, CNN chief medical correspondent Dr. Sanjay Gupta said Friday the ability to garner the sixth dose with these syringes does not exist everywhere.

“Many places have them,” Gupta told CNN’s John Berman, “but not every place.”

McKesson, a medical supplies company the federal government has contracted to help with distribution, said syringe kits that allow extraction of the sixth dose are being made available.

These changes highlight the push to get as many people vaccinated as possible amid an inconsistent supply chain.

About 5% of the US population — roughly 17.4 million people — has received at least one dose of the vaccine, and more than 3 million people are fully vaccinated, according to CDC data updated Saturday. Nearly 1.6 million vaccine doses were administered Friday, the largest one-day increase reported.

New cases are down, but things remain dire

“You’re going to see people traveling again, probably, for spring break, in March and April,” said Dr. Celine Gounder, a former member of the Biden transition’s Covid-19 advisory board. “And that is exactly when we expect that these variants — in particular, the UK variant — to have taken hold in the US.”

• Cases: Johns Hopkins University reported more than 186,000 new cases on Friday. The US is currently averaging 180,816 new daily cases across seven days. That’s the lowest since December 2, and down 27% from the peak seen January 11, when the average of new cases across a week hit 249,168. But the current average is still 2.7 times above the summer’s highest level in July.

• Hospitalizations: On Saturday, there were 113,609 Covid-19 patients in US hospitals, a metric that continues to drop day by day, according to data from the COVID Tracking Project. That’s the lowest since December 20, but it’s still nearly twice the reported peak in the summer.
• Deaths: There were 3,655 new deaths reported Friday, per Johns Hopkins data. The US is averaging more than 3,000 new deaths a day across a week. With more than 68,152 deaths so far, January is currently the second deadliest month of the pandemic, behind December 2020. January is on track to surpass December’s death toll of nearly 77,500 deaths.

California reported 764 Covid-19 deaths on Friday, a pandemic high for the Golden State, according to the state’s Department of Public Health. Another 593 deaths were reported in the state on Saturday.

Jennifer Bagues, funeral director of Felipe Bagues Mortuary in Los Angeles, said her business has been bombarded, prompting her to hire new employees and an answering service to manage the surge in calls.

“We have had to turn away families, which is really hard,” she said, because funeral directors and their staffs also operate as support for families going through their “toughest time.”

“You have to tell them that, I can put you on a wait list and we’ll get to you,” Bagues said. “That’s unheard of in our industry. I’ve been doing this 25 years and I’ve never had this happen.”

A lack of information and a lack of financial support has left states struggling to manage a slow Covid-19 vaccine rollout, according to Michael Osterholm, director of the Center for Infectious Disease Research and Policy at the University of Minnesota.

“I am eligible in Minnesota to get a vaccination also and I can’t find one,” Osterholm, a former coronavirus adviser to President Joe Biden, told CNN’s Erin Burnett on Friday. “I want to share that frustration loud and clear.”

Utah Gov. Spencer Cox told CNN’s Chris Cuomo that the state is well-positioned for distribution, but that the vaccine allotment has been bottled up at private pharmacies nationwide.

“Long-term care facilities in Utah, they have way too much vaccine. We estimate they have 15 to 16,000 extra doses that they don’t need and can’t use right now. So, we’re taking that back and we’re giving it to our local health departments and it will be gone next week,” Cox said.

Cox said the competition between states early in the pandemic, when the federal government forced states to scrounge for supplies such as personal protective equipment, should be avoided in the case of vaccines.

“This shouldn’t be the ‘Hunger Games,’ like it was with PPE, right. That was ridiculous and we all had to play that game,” he said. “We’re all in this together. Governors are in this together. We just need insight from the federal government and the manufacturers,” Cox said.

Send us your questions for President Biden’s Covid-19 team

The frustrations with vaccine distribution and concerns about supply have echoed across the country.

New York has administered 97% of its allocated first doses of vaccine, Gov. Andrew Cuomo said Friday, and is expected to run out shortly. On Saturday, Cuomo spoke from a vaccine pop-up site at a public housing complex in Brooklyn, where he emphasized the importance of equal access to vaccines for Black and Brown communities that have disproportionately suffered from the pandemic.

“Wealthier, White communities had more Covid testing,” he said. “When it comes to this vaccine, access has to be fair across the board.”

The Los Angeles County Department of Public Health on Friday said it was receiving enough doses to inoculate just 1 in 4 people currently eligible.

“We have the infrastructure, the issue is getting access to the vaccine,” L.A. County Supervisor Holly Mitchell told CNN Saturday, speaking from The Forum in Inglewood, a vaccination super site where 9,400 people have been vaccinated since Tuesday, she said.

“It’s not as bad as some people are painting it,” Collins said in an MSNBC interview. “We are now averaging almost a million doses per day going into arms, and that’s a pretty good trajectory to get to where President Biden wants to.”

Biden has said his goal is to get 100 million doses administered in his first 100 days in office.

“We might easily exceed that, but I think he’s being smart,” Collins noted. “Instead of overpromising and underdelivering, which is sort of what happened back in December, he’s going to kind of under promise and then hope to overdeliver.”

Johnson & Johnson is expected to present data on its vaccine candidate in the next few weeks to the Food and Drug Administration for evaluation.

If the vaccine receives emergency use authorization soon after, the United States could see a significant increase in doses available by May, Dr. Anthony Fauci, Biden’s chief medical adviser, said Saturday.

“Let’s say they do develop and get an EUA in February, by the time they get a meaningful amount of doses, it likely will be a month or two following that,” Fauci said in an interview on MSNBC.

“Once they get going into May, June, July, August, then you’re going to see a sharp escalation of additional doses of this one-dose vaccine,” he said.

Fauci, the director of the National Institute of Allergy and Infectious Diseases, spoke with CNN on Friday about the coronavirus variant known as B.1.1.7, which was first identified in the United Kingdom and is believed to be more contagious. He says its transmission in the US needs to be monitored carefully.

At least 195 cases of the variant have been identified in 22 states, according to the CDC. That number doesn’t represent the total number of cases in the US, the agency said, but just those that have been found through analysis.

“It has not become dominant,” Fauci said. “It might. That’s the reason why you have to watch it carefully as we go from January into February, and really take a good look.”

A CDC report this month said the variant has the potential to “increase the US pandemic trajectory in the coming months,” and people should focus on using masks, maintaining social distance and other measures that reduce transmission.

Fauci agreed with the health recommendations. “That’s the kind of thing that prevents surges regardless of … the type of virus.”