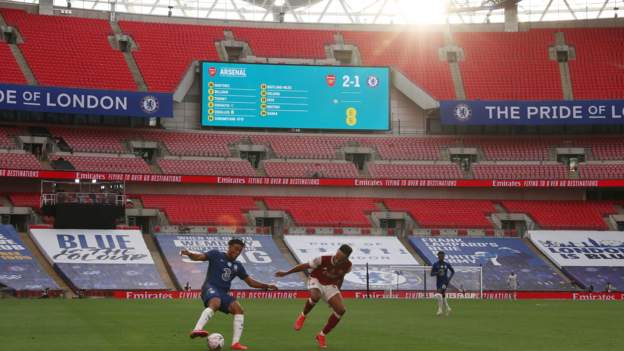 Plans for spectators to attend sporting events in England from 1 October are to be reviewed, Prime Minister Boris Johnson has confirmed.

Johnson, speaking at a Downing Street news conference, also said pilot events in September would be restricted to 1,000 fans with social distancing measures in place.

“We must revise plans to pilot larger audiences in venues later this month and review our intention to return audiences to stadiums from 1 October,” said Johnson.

“But that doesn’t mean we are going to scrap the programme entirely.

“We are just going to have to review it and abridge it.”

In a series of posts on Twitter, Culture Secretary Oliver Dowden said the government “continues to plan for the best”.

He added: “Further to the PM’s announcement we are reviewing the list of proposed sports pilots ahead of 1 October, in light of the increased number of [Covid-19] cases. Details of changes will be announced shortly.

“We are keeping under review further easements proposed from 1 October but no changes have been announced.

“Work continues round the clock with the ambition of having audiences back much closer to normal by Christmas.”

The majority of sports in England have been played behind closed doors since the coronavirus lockdown in March, including Premier League football, the FA Cup final, England Test matches and two Formula 1 races at Silverstone.

Earlier on Wednesday, Premier League chief executive Richard Masters said it was “absolutely critical” that fans were allowed back inside stadiums as soon as possible and failure to do so would cost clubs £700m during the 2020-21 season, which starts on Saturday.

At the end of August, 2,500 people watched a friendly between Brighton and Chelsea at the Seagulls’ Amex Stadium – the first time fans had been allowed into a Premier League ground in almost six months.

Around 300 fans were allowed to watch last month’s World Snooker Championship final between Ronnie O’Sullivan and Kyren Wilson at the Crucible Theatre in Sheffield, although original plans to admit fans for all days of the tournament were reversed.

More than 2,500 spectators bought tickets for Doncaster on Wednesday as the Leger meeting started, the first crowd at a British horse racing fixture in six months, although the rest of the meeting will be held behind closed doors.

The Women’s Super League match between Arsenal and West Ham on 12 September was one of the pilot events that were planned with a limited number of fans in attendance.

Other planned pilot events include football’s non-league finals day at Wembley on 27 September, race meetings at Warwick and Newmarket on 21 and 24 September respectively, a basketball exhibition match in Newcastle on 18 September and a speedway event in Ipswich on 26 September.