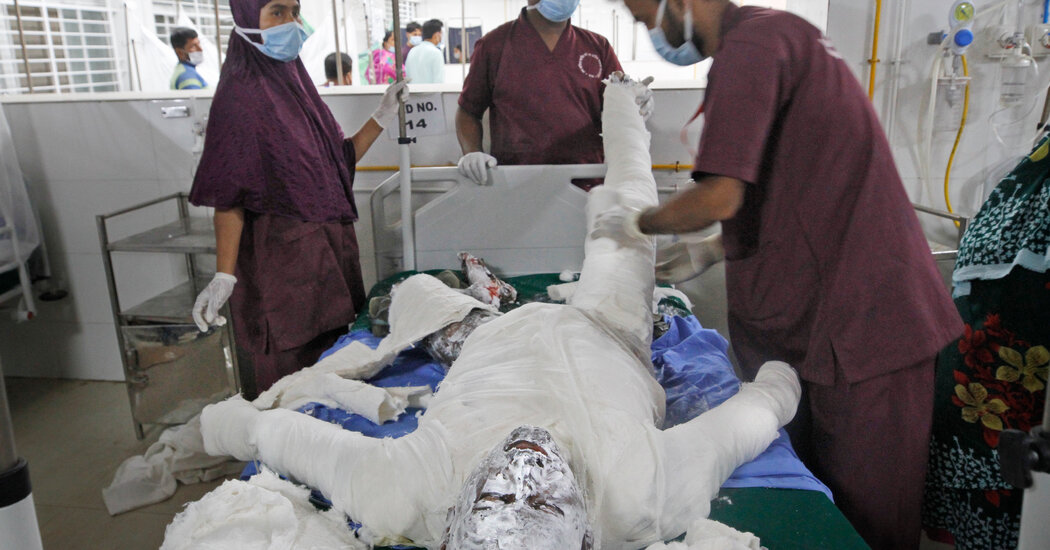 An explosion on Friday night at a mosque near Bangladesh’s capital, believed to have been caused by a gas leak, killed at least 16 worshipers and left 21 with burns so severe that the death toll could rise further, according to a police officer and a doctor treating some of the victims.

Gas from an underground pipeline may have leaked into the Baitus Salat Jame mosque in Narayanganj, just outside Dhaka. The mosque had been experiencing power outages and as the electricity surged back on, sparks from air conditioning units may have ignited fumes.

The mosque was crowded at the time with dozens of people in the two-story building. At about 8:30 p.m., several blasts shook the mosque and a fire broke out. At least one young child was among the dead.

“From witness accounts, we know that all six air-conditioners on the ground floor of the mosque exploded simultaneously,” said Aslam Hossain, a police officer. “Only one or two worshipers were able to escape from the mosque, the rest were burned inside the mosque.”

Photos showed the mosque’s white air conditioning units browned, gnarled and sagging, partially melted from the flames. Authorities are still investigating the cause of the blast. But Mr. Hossain said “we have come to know that there were leakages in the gas pipeline underneath the mosque.”

By Saturday morning, many of the survivors were fighting for their lives.

“They have major burns. Their bodies are nearly fully burned and their airways are also burned badly,” said Dr. Samanta Lal Sen, the national coordinator for Sheikh Hasina National Institute of Burn and Plastic Surgery in Dhaka, where some victims were being treated. “It will be very challenging to save them,” he added.

Rubel Hossain said on Saturday that his niece had lost her 6-year-old son in the blast and her husband was being treated for burns. The niece told her uncle that the boy had asked to watch cartoons on television but she had told him to go to the mosque with his father first.

“She has stopped talking. She has refrained from eating and drinking since last night,” Mr. Hossain said. “She said, ‘If I had not sent my son to the mosque, he would not have had to die.’”