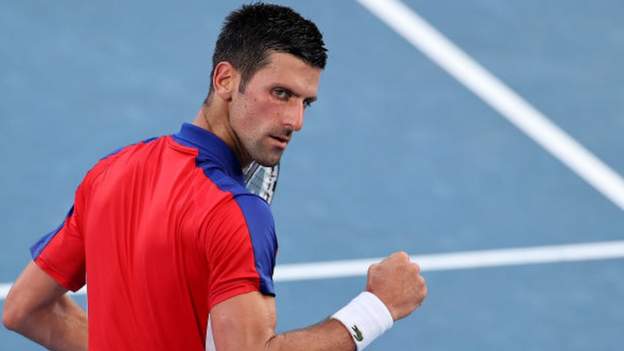 Novak Djokovic remains on course for a ‘Golden Slam’ after ruthlessly ending the dreams of home hope Kei Nishikori to cruise into the Olympic semi-finals.

The world number one, bidding to become the first man to win all four Grand Slam titles and an Olympic gold in the same year, breezed through 6-2 6-0.

He will face Germany’s Alexander Zverev in the semi-finals on Friday.

Bencic, 24, outlasted Kazakhstan’s Rybakina 7-6 (7-2) 4-6 6-3 in a match lasting almost three hours in the searing Tokyo heat, saving five set points in a 73-minute opening set that she won on a tie-break.

Vondrousova, ranked 42nd in the world, enjoyed a surprisingly far more serene passage as she shocked world number six Elina Svitolina, brushing the Ukrainian aside 6-3 6-1 in little over an hour.

Thursday’s matches began at 15:00 local time (07:00 BST), four hours later than on previous days, after organisers agreed to push start times back following complaints from players about the hot conditions.

There were few concerns about the heat for Djokovic as he took just an hour and 10 minutes to dispatch Japan’s 2016 bronze medallist Nishikori, who cut an increasingly forlorn figure as his hopes of winning a medal for the host nation were obliterated.

“Playing after five [pm] is completely different. Obviously, there is a little bit of a breeze,” said Djokovic, 34.

“I’m very happy, it was my best performance in the tournament. Matches are not getting easier but my level of tennis is getting better and better.”

Victory equalled another record for the Serb, who drew level with Roger Federer and Rafael Nadal on 20 Grand Slam titles at Wimbledon last month, as he matched the Swiss’ 13 singles match Olympic wins.

Djokovic, however, has never reached an Olympic final, his best performance coming in Beijing in 2008 when he took bronze after losing to Nadal in the last four.

Standing in his way is 24-year-old Zverev, who produced a display almost as impressive as Djokovic’s to see off France’s Jeremy Chardy 6-4 6-1.

Spain’s Pablo Carreno Busta will meet Karen Khachanov, of the Russian Olympic Committee, in Friday’s other semi-final at the Ariake Tennis Park.