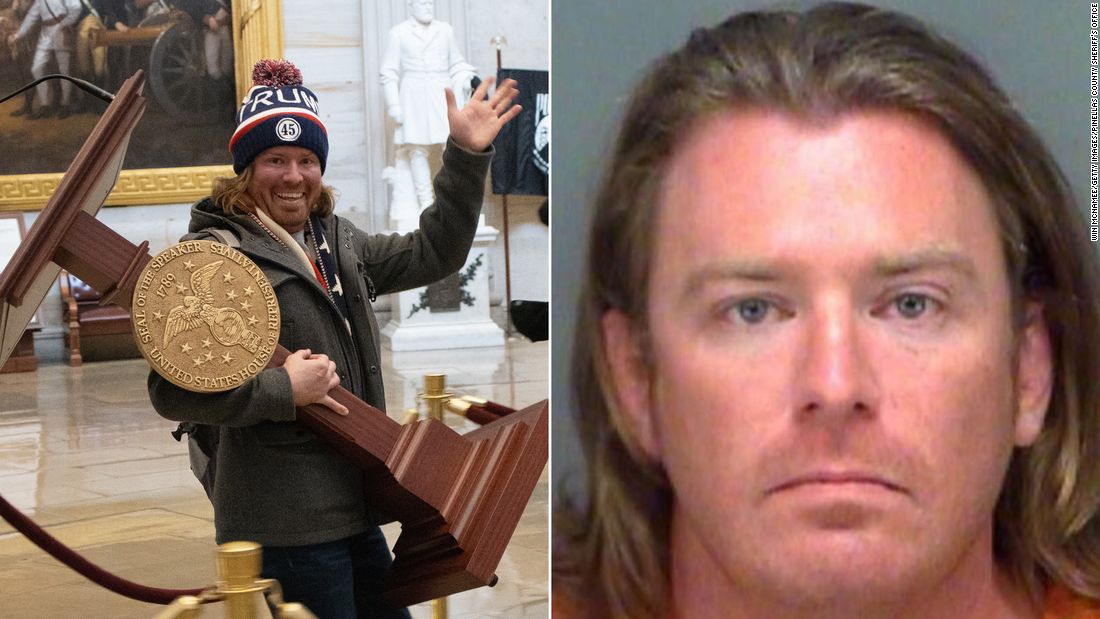 Adam Johnson, 36, of Florida was arrested in the state Friday and booked into the Pinellas County Jail just days after he was allegedly caught on camera carrying the House speaker’s lectern, according to the release. He has been charged with one count of knowingly entering or remaining in any restricted building or grounds without lawful authority; one count of theft of government property; and one count of violent entry and disorderly conduct on Capitol grounds.

Jacob Anthony Chansley, who allegedly was the man seen in photos dressed in horns, bearskin headdress and face paint, was taken into custody Saturday, according to the release. The Arizona man has been charged with knowingly entering or remaining in any restricted building or grounds without lawful authority, and with violent entry and disorderly conduct on Capitol grounds.

It was not immediately clear Saturday whether Johnson or Chansley had an attorney.

The insurrection on Capitol Hill on Wednesday shocked the nation as a mob of President Donald Trump’s supporters laid siege to America’s symbol of democracy, determined to stop Congress from certifying the results of the 2020 presidential election.

Derrick Evans, a West Virginia state lawmaker allegedly among the rioters who stormed the Capitol building, has been charged with one count of knowingly entering or remaining in any restricted building or grounds without lawful authority; and one count of violent entry and disorderly conduct on Capitol Grounds. A federal magistrate judge in West Virginia released him on his personal recognizance after he appeared in court Friday afternoon, according to court records.

Evans has denied taking part in the destruction and violence and has since deleted the clip, but not before it was shared on social media and aired by CNN affiliate WCHS. In another video posted to his Facebook page Wednesday morning, he laughs as he predicts a riot.

The Republican state lawmaker has said he only filmed the event as an “independent member of the media to film history,” though it does not appear he has any experience working as one.

His lawyer, John Bryan, previously told CNN in a statement Thursday that his client “had no choice but to enter” the Capitol due to the size of the crowd he was in, and that “it wasn’t apparent to Mr. Evans that he wasn’t allowed to follow the crowd into this public area of the Capitol, inside which members of the public were already located.”
There are now 17 known federal criminal defendants related to the Capitol riots. Some are people who grew violent with police, some are photographed in the building during the destruction, and some are people who allegedly brought guns and ammunition and, in the case of one man, Molotov cocktails, around the Capitol.

CNN’s Chuck Johnston and Veronica Stracqualursi contributed to this report.