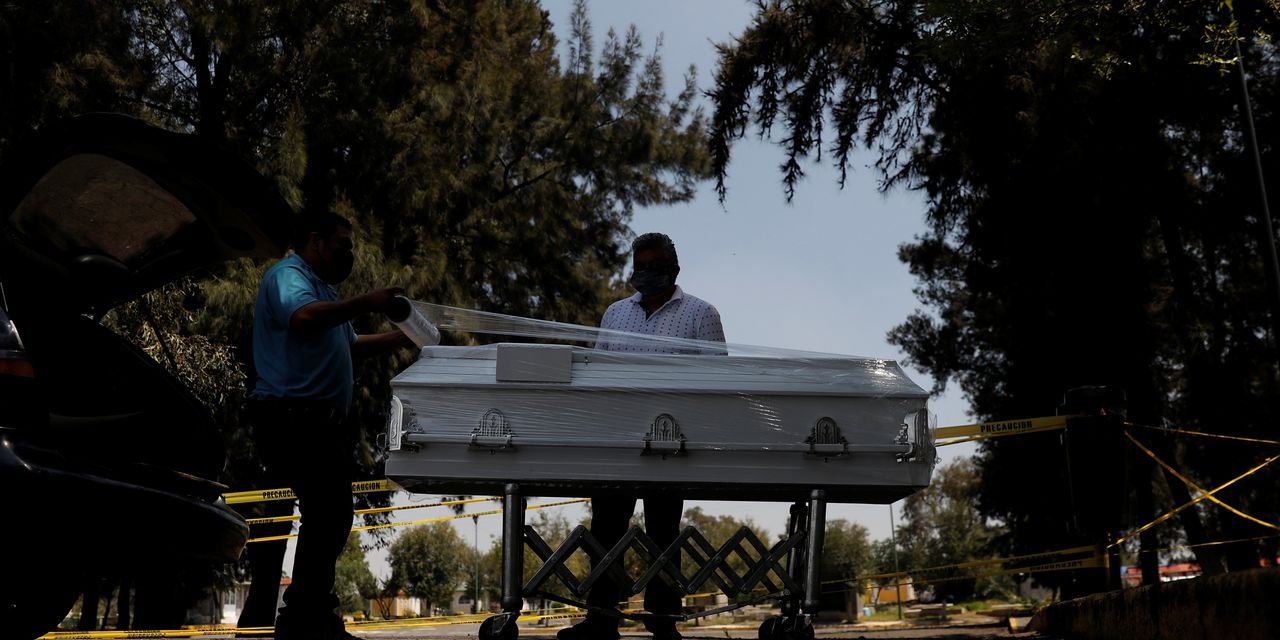 CUAUTITLÁN, Mexico—Mexico is running out of death certificates due to the high death toll brought by the coronavirus pandemic and federal bureaucratic snafus, authorities say, delaying burials.

The higher-than-normal deaths have caused a shortage of certificates in working-class communities of the country’s most populated state, the State of Mexico, as well as in Mexico City and Baja California state, said Deputy Health Minister Hugo López-Gatell, who leads the government’s pandemic response.

The shortage reflects the depth of the pandemic in Mexico. The country ranks fourth in the world in Covid-19 deaths at more than 66,000, after the U.S., Brazil and India. Both the government and health experts say the real toll is likely far higher but is obscured by limited testing.

The lack of death certificates hampers the work of funeral homes and doctors and fuels anxiety among families unable to hold funeral services for relatives without the document.

“I receive calls from doctors almost daily asking me to help them to get more death certificates,” said Carlos Aranza, the State of Mexico’s coordinator of health services. “We are going through a period of great scarcity.”

Funeral directors in Cuautitlán, a gritty industrial suburb north of Mexico City, say that households have had to keep relatives’ corpses at home while they trek across the city seeking doctors who could provide death certificates.

“Some families had corpses at home for four or five days,” said Eduardo Salinas, director of funeral home La Piedad. He said funeral homes in Cuautitlán have reached out to doctors in neighboring municipalities and states. So have affected families.

“It’s dangerous for all of us. They should cremate the bodies immediately,” said Laura Rebollar, a shopkeeper who said her father-in-law died of Covid-19 in May.

State of Mexico officials blame the shortage on the pandemic.

“In the face of the national health emergency due to the Covid-19 epidemic, the number of deaths has exceeded the estimate,” the state said in a statement.

But bureaucratic hurdles also are a factor, state authorities say. Mr. Aranza, the State of Mexico health official, said the federal government hasn’t sent death certificates for this year despite a request for some 50,000 of them. The state, he said, has used leftover certificates from prior years and borrowed from other states.

State of Mexico officials are strictly rationing the documents, which have a bar code and are numbered to avoid fraud and other possible crimes.

Over the past 20 days, the federal government has been printing and distributing more than one million certificates to alleviate the shortage, Mr. López-Gatell told a news conference on Friday, a day after The Wall Street Journal asked the Health Ministry about the shortages but hadn’t received a response.

“In recent days we had a major challenge with (these) key documents,” he said.

In late August, exasperated funeral directors and private doctors in Cuautitlán laid a coffin in front of the state health authority to demand more death certificates. Public-health officials told them they would distribute 300 certificates obtained from other states.

The shortage has fueled a lucrative market for doctors. Although the law calls for death certificates to be issued free, doctors charge between $200 and $400 for a house visit and certificate filling.

“It’s a huge black market. Doctors are literally selling the certificates to the highest bidder,” said Carlos Bazán, who runs another small funeral home in Cuautitlán.

During most years, the federal government prints and distributes 900,000 death certificates across the country to cover an average of 750,000 deaths in a given year, said Héctor Hernández, a demographer at Mexico’s National Autonomous University who is a former health official.

Usually, between 100,000 to 150,000 certificates are left unused. But he said the additional deaths due to the pandemic would likely have caused some states to use up their spare capacity.

“You usually see a significant increase in deaths after natural disasters, but we’ve never seen anything even close to these numbers,” he said. “The government can eventually sort out the shortage issues, but it also shows the magnitude of excess mortality.”

The shortfall adds to growing evidence that Mexico has endured a bigger toll during the pandemic than official numbers suggest.

Mexico’s government only registers deaths in cases that tested positive for coronavirus. But the country has one of the world’s lowest testing rates.

Mexico performs five tests per 100,000 people on average daily, well below the 37 of Brazil and the 139 of the U.S., according to Johns Hopkins University. Some hospitals don’t have enough testing kits. And an unknown number of Mexicans are dying at home.

Mexico’s government has acknowledged that the true number of Covid-19 deaths may be above its official count. Health authorities recently said that a survey of 20 of Mexico’s 32 states found 71,000 deaths above the average from previous years from March to late June. Yet the confirmed number of Covid deaths for those 20 states during that time was just 21,000, and 28,000 for the country as a whole.

That suggests Mexico’s true pandemic toll could be three times the official figure.

Other studies have backed that up. In Mexico City alone, excess deaths stood at 31,200 from late March to late August, according to a recent study by Mexican magazine Nexos, which reviewed death certificates posted at city registry offices. That was triple the official Covid toll in that period.

If the studies are correct, Mexico’s real toll is likely closer to 190,000—similar to that of the U.S., which has more than double the population.

“It’s a situation that affects the most disadvantaged, most of whom work in the underground economy and don’t have access to public medical care, much less a decent funeral service,” said Humberto Padgett, a local radio and television reporter who has covered these communities for more than two decades. He first reported on the shortage of certificates in late August.