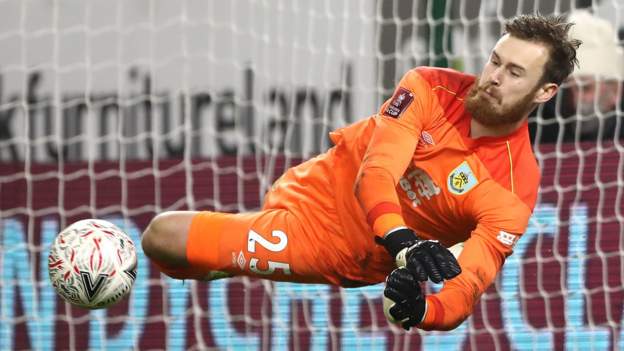 Burnley were seconds away from a shock FA Cup third-round defeat by MK Dons before debutant keeper Will Norris inspired a penalty shootout win.

Well-travelled striker Cameron Jerome’s first-half header against the run of play looked to be enough for the Dons.

But the League One side were denied a memorable win when Matej Vydra scored with almost the last kick of the game.

Escaping from the brink of defeat meant Burnley’s new era under American businessman Alan Pace began with a victory.

Clarets manager Sean Dyche named an experienced side including several of his key players, but decided it was the right opportunity to give 27-year-old Norris his chance.

After starting out in non-league with the likes of Royston Town, Braintree and Cambridge, Norris’ ascent to the upper levels of the game has been a steady one.

The 6ft 5in keeper started to attract interest after helping Cambridge back into the Football League, moving to Wolves in 2017 before switching to Burnley last summer.

Norris had little to do in the first half, with the visitors barely in the Burnley half before 34-year-old Jerome escaped Ben Mee to score after Scott Fraser’s flick from a left-wing cross.

Burnley looked set to pay the price for not making their dominance count, with MK keeper Lee Nicholls producing a string of superb saves.

MK Dons looked set to go down to 10 men in first-half stoppage time after defender Richard Keogh was initially dismissed for being adjudged to have denied a clear goalscoring chance with a handball, only for referee Jon Moss to overturn the decision after watching the incident again on the pitchside monitor.

Keeping their full complement of 11 players proved crucial. MK Dons defended intelligently and resiliently in the second half to frustrate Burnley and leave them seconds away from an upset until Vydra’s intevention.

Although Nicholl denied Vydra in the shootout, it was Norris who stole the show as saves from Ben Gladwin and Lasse Sorensen helped put Burnley into the fourth round for the fifth time in the past six seasons.