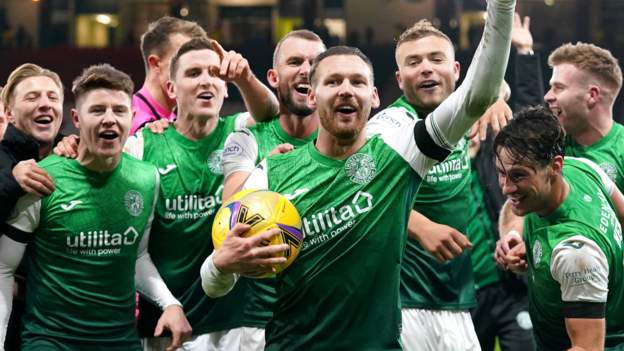 Boyle’s three goals came in 29 manic minutes, first scooping in from a corner before smashing a fine finish and a penalty past Allan McGregor.

Scott Arfield gave Rangers a lifeline at the end of an extraordinary half, but the Scottish champions failed to test goalkeeper Matt Macey in a lacklustre second period.

It is a miserable start to the post-Steven Gerrard era – with Van Bronckhorst expected to assume control on Monday – but domestic finals were something the recently-departed boss struggled to reach during his tenure.

Rangers have now progressed beyond the semi-final stage of the two cup competitions just once in their last nine attempts.

“I’m delighted but pride is the biggest emotion,” Ross told BBC Scotland. “We’ve had a tough month and a tough few weeks prior to that as well. To deliver that type of performance on this type of occasion is outstanding.

“We’ve taken some criticism at times for losing big games. We keep coming to big games, that’s the thing. We’ve got an opportunity to go win a cup now, which is brilliant.

“They didn’t let another opportunity slip by them. The character they’ve shown and the trust in each other at the club was evident. We had to show all aspects of our game. As a whole team, they were prepared to put their body on the line.”

Ross’ side will now face Celtic on 19 December back at the national stadium in their second consecutive domestic final, having lost last term’s Scottish Cup showpiece against St Johnstone.

As Van Bronckhorst looked on from the south stand, eyes were also fixed on Hibs.

Questions have been asked of Ross in big games after a three defeats at the national stadium last term – one to Hearts in the delayed 2019-20 Scottish Cup semi-final and two to St Johnstone in the League Cup last four and Scottish Cup final.

It was also the first time since Hibs’ 2016 Scottish Cup final win that these two have met at Hampden, and Ross’ men would be required to show the spirit of Alan Stubbs’ cup-winning side to prevent Rangers progressing – even without a manager.

The fact it was the Leith side’s first game in almost a month after a Covid outbreak and the international break just heightened the difficulty, and signs of rustiness were clear from the off as Paul Hanlon and Joe Newell were booked inside three minutes.

But the only indications of impairment after that were from Rangers. Hibs’ first venture forward saw Kevin Nisbet win a corner, with the resulting delivery hitting James Tavernier and falling into the path of Boyle, who scooped in the opener.

Rangers searched for a rapid response. Joe Aribo slipped in Alfredo Morelos, but the striker’s finish was tame.

And Boyle showed the Colombian how it was done up the other end in a similar move, this time Nisbet playing the Australian international through to drill emphatically low past Allan McGregor.

Rangers were a shadow of themselves in defence but still looked a threat in attack when Arfield had an effort parried away and another flash wide either side of a near-post Aribo attempt.

If they were not already, Hibs were in dreamland on 38 minutes. Boyle was tripped in the box by Steven Davis and picked himself back up to complete a sensational first-half hat-trick.

But while their fans tried to work out whether they were in a nightmare or not, Rangers grabbed themselves a lifeline when Arfield swept in a close-range finish with his left foot after Ryan Porteous failed to clear.

Ross’ reaction was one of a man who just watched his side concede an equaliser. He will have known how big a part that moment could play in the game as Rangers pushed for a second, with Leon Balogun and Connor Goldson heading wide.

But the expected second-half spark from the Scottish Premiership leaders did not materialise. There was a serious lack of urgency and with every backpass came a barrage of groans from their support.

Substitute Ryan Jack struck narrowly wide, before Macey almost set up a nervy end when he miscontrolled a Darren McGregor pass and saw his touch go behind him and clip a post. Proper heart-in-mouth stuff.

Connor Goldson then flashed over a sitter, which left Van Bronckhorst sitting with his hand over his face – a feeling every Rangers fan would have shared on a dire night for them at Hampden.

Man of the match – Martin Boyle

What did we learn?

Welcome to Scottish football management, Gio. The new boss goes into his first day of work tomorrow with plenty to ponder.

It was hard to believe you were watching a side four points clear at the top of the league. Rangers conceded 13 goals in their entire league campaign last term, but they shipped 23% of that figure in 29 first-half minutes at Hampden.

The Dutchman will demand a response from his players with a huge European tie against Sparta Prague looming at Ibrox on Thursday – and this group are more than capable of rousing themselves.

This result in isolation is remarkable for Hibs, but when you factor in that the last time they played before Sunday was 25 days ago.

Murmurs around Ross’ credentials were growing louder and his big-game mentality continued to be questioned following last season’s Hampden heartache, but this result will go a long way in silencing those doubters.

Van Bronckhorst will take charge of his first game on Thursday as Rangers host Sparta Prague (20:00 GMT) in the Europa League. A trip to Livingston next Sunday (12:00) follows.

Meanwhile, Hibs play their rearranged league fixture at Ross County on Wednesday (19:45) before a trip to St Johnstone on Saturday (15:00).