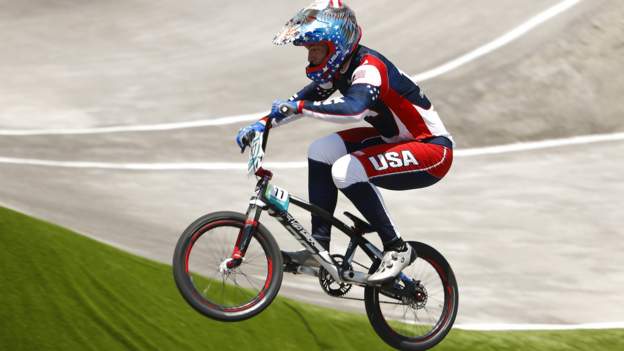 The 28-year-old, who won the Olympic title in 2016, has been moved out of a critical care unit in a Tokyo hospital.

“Cognitively, he’s doing well. He knows where he is. He knows his birthday. He recognises people,” his father Mike told USA Today.

A USA Cycling statement said: “Doctors report there has been no additional bleeding and no new injuries found.”

It continued: “Fields has been moved out of the critical care unit and will remain in the hospital until cleared.”

The Las Vegas native was one of the favourites for gold, which was won by Britain’s Kye Whyte.

The American went down hard in a first-corner crash in the third and final heat of the semi-final, having already qualified for the final.

Fields was accompanied to St Luke’s International Hospital intensive care unit by the chief medical officer of the US Olympic Team and USA Cycling’s medical team and coaches.

What is a brain haemorrhage?

UK charity Headway, who provide information and support to people affected by head injuries, define a brain haemorrhage as “bleeding in or around the brain either as a result of ruptured aneurysm or following a significant blow to the head”.

They are diagnosed via a CT or MRI scan of the head.

The organisation says with quick diagnosis and treatment many people can make a full recovery from brain injuries with limited or no lasting effects.